Lambert here: Readers, I apologize for the original post I had promised; unfortunately I had a formatting debacle that I couldn’t climb back from in time. I chose this cross-post since readers both because it concerns European stability, and readers might be interested in comparing the metrics for European core and periphery to those for out own coastal metropolises and flyover states.

The protracted economic crisis in Europe fuelled demands for a deeper understanding of the dynamics of ‘core’ and ‘periphery’ in the EU, and in its Economic and Monetary Union (EMU) in particular (De Grauwe 2018). We introduce a new framework to study these asymmetries, generating a novel, theory-based measure that is time-variant and continuous (i.e. it departs from static binary classifications of core and periphery). The framework captures the probability of a country being classified as peripheral. We construct it for a set of European countries for every year since 1989 and document the formation and evolution of a core and periphery. We unearth an increasingly integrated core next to an entrenched periphery, with a third set of countries in between that is characterised by in-and-out movements (Campos and Macchiarelli 2018).

Our starting point is the seminal paper by Bayoumi and Eichengreen (1993), who identify a core-periphery pattern in the run-up to the formation of EMU. Motivated by optimal currency area theory, they identify demand and supply shocks using long-run restrictions in a structural framework (Blanchard and Quah 1989) and yearly data over 1963-1989. They find a core where supply-side shocks are highly correlated (Germany, France, Belgium, Netherlands, and Denmark) and a periphery where shocks are uncorrelated (Greece, Ireland, Portugal, Spain, Italy, and the UK). They forewarn that if persistent, this divide would be detrimental to EMU.

The novelty of our approach is that we treat these output considerations as over-identifying restrictions on the supply side. Augmenting the original Bayoumi and Eichengreen (1993) framework, we test whether output is quantitatively (magnitude) and qualitatively (sign) affected by supply-side shocks across countries.

This generates an absolute measure of asymmetries that is theory-based, time-variant, and not binary. It reflects the probability of a country being classified as peripheral, and in so doing allow us to ascertain a changing European core and periphery, yearly from 1989 to 2015. Importantly, this does not rely on choosing a particular country, such as Germany, as the anchor.

The more frequently the model under the proposed over-identifying restriction is rejected, the more peripheral a country is said to be. Conversely, the lower this frequency (i.e. the less often the model is rejected for a given country in a given year), the higher the probability of a country being classified as core.

This is implemented by calculating the share of the model’s rejections of the supply-side shock restriction in the total number of bootstrap replications.1 The sample is, with a fixed 25-year window, then shifted one observation up and the structural model is re-estimated so as to obtain a new number of rejections. The procedure is performed iteratively until the end of the sample. We call this index NORD as it reflects the ‘number of rejections dynamics’ in our sample.

In the Beginning, There was Periphery

We use NORD and the Phillips and Sul (2007) framework to study convergence dynamics. One of this procedure’s outcomes is to separate our sample into three groups of countries. All countries in the first set show a commonly sustained decline in the probability of being classified as peripheral. We call it the core.

Using the 50% cut-off point for convenience, the first three countries to enter the core are Germany, France, and Austria, all by 1999 – which is the year the euro was introduced. Belgium joins the core in 2000, and Italy and the Netherlands join in 2005 and 2007, respectively.

Figure 1 When and how did the core form? 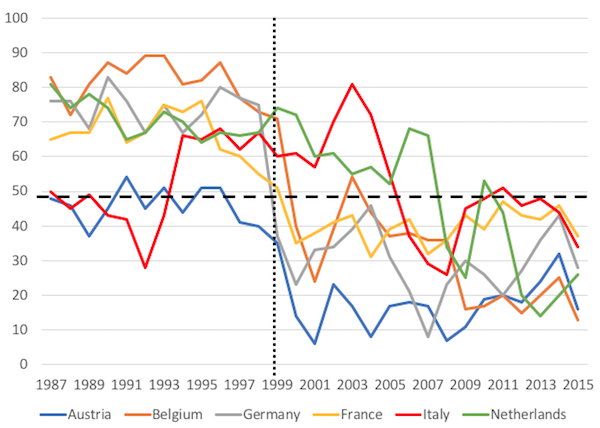 The second set of countries given by the Philips-Sul procedure is shown in Figure 2. Not only do these countries have high levels of NORD, but their series are trend-less. We call this the periphery. This result strongly confirms Bayoumi and Eichengreen’s early warning about EMU, specifically about the possibility of an entrenched periphery. Note that neither Norway nor Switzerland is a member of the euro area, although Portugal, Finland, and Ireland are. 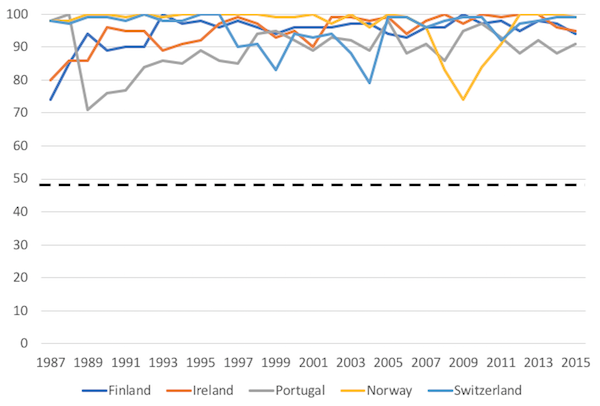 The Philips-Sul procedure also identifies a third, intermediary set of countries. Within this group, we distinguish between two main subsets: one for which NORD does not display a sustained movement in or out (‘trendless’), and another one for which it does (‘trending’).

Figure 3 shows the two countries in the middle/trendless sub-set. The figures for Denmark change very little over time, while the opposite happens for the UK where NORD displays one of the highest volatilities in our sample, with the UK moving in and out of the core.

Figure 3 How did the middle trendless group fare? 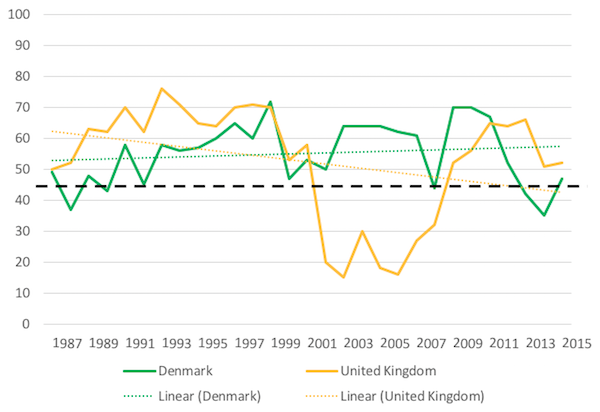 Figure 4 shows the trending/middle sub-set with intermediate levels of NORD. Spain’s NORD is flat until 1999 and starts to decline afterwards, moving towards the core (linear interpolation suggests it may join circa 2020). Inversely, Greece and Sweden move away from the core. In other words, they become more peripheral over time. Note that between the introduction of the euro in 1999 and the onset of the financial crisis in 2007, Greece was moving in the ‘right’ direction – that is, it was core-bound.

Figure 4 How well did the middle trending group perform? 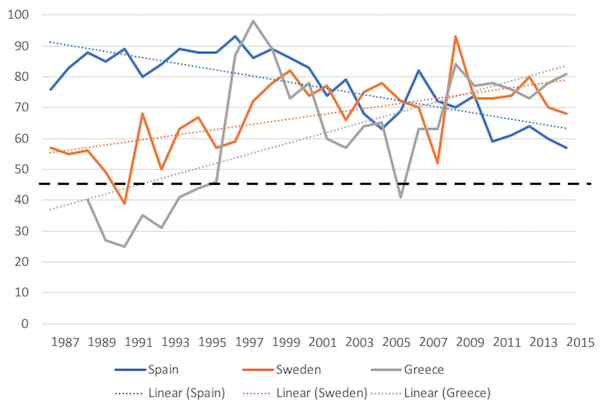 The Correlates of NORD

What are the factors that help explain the variation in NORD across countries and over time? These correlations are suggestive of whether NORD is doing a good job in capturing core and periphery dynamics.

Using a specification based on endogenous OCA theory, our panel estimates indicate that euro membership and looser product market regulations make countries more likely to be classified as core (Campos and Macchiarelli 2018).

To elaborate on the latter result, we also find that trade openness and, to a lesser extent, foreign direct investment help to ‘import competition’ and in so doing substitute for product market regulations. Imports – but not so much exports – increase the probability of a country being classified as core.2

The results above show that the core and periphery pattern in EMU has changed considerably since 1989, both in terms of relative strengths and distances between main groups of countries, but also in terms of the trajectories of individual countries. For example, it is interesting that different countries join the core in different years.

Overall, our new theory-based index, NORD, decreases over time for the set of countries that the Philips and Sul (2007) procedure singles out – this set of countries is what we call core. NORD remains high and basically constant for what we define as a peripheral group (worryingly confirming Bayoumi and Eichengreen’s warning about a deep-seated periphery). Finally, NORD varies substantially for an intermediary set of countries since 1989. In the latter, Denmark’s NORD remains constant around the 50% mark while the UK’s moves in and out of the core over time.

The results for Spain are encouraging as they show that although the country should still be classified as periphery, it is clearly moving towards the core. This contrasts with the experiences of Sweden and Greece which, according to their NORD scores, are slowly moving away from the core, or in other words, are gradually becoming more peripheral in the EU.