Yves here. The observations about the Mafia have implications beyond Italy, particularly since the US seems hell bent on creating failed states.

The Mafia is often cited as one of the main reasons why Sicily has lagged behind the rest of Italy in economic and social development. This column describes how in an environment with weak state presence, the socialist threat of Peasant Fasci organisations at the end of the 19th century induced landholders, estate managers, and local politicians in Sicily to turn to the Mafia to resist and combat peasant demands. Within a few decades, the presence of the Mafia appears to have significantly reduced literacy, increased infant mortality, limited the provision of a variety of local public goods, and may also have significantly reduced local political competition.

The criminal syndicate known as the Mafia has played a defining role in the Sicilian economy and politics since its inception in the mid-19th century (Dimico et al. 2012), and has often been proffered as one of the prime reasons why Sicily has lagged behind the rest of Italy in economic and social development.

Though many aspects of the Sicilian Mafia are unique to the economic and social conditions of the island and its particular history, there are also several commonalities between the Sicilian Mafia and other organised crime syndicates in Italy (such as the Camorra in Naples and ‘Ndrangheta in Calabria), as well as the various drug gangs in Mexico, Colombia, and Central America (see Bianchi et al. 2017 and Barone and Narciso 2012 on the effects of crime syndicates on firms and governments).  Most importantly for our purposes, all of these organisations appear to have partly filled the void created by a weak state, and may have contributed to the continued weakness of state institutions and to economic underdevelopment. Our recent paper (Acemoglu et al. 2017) seeks to contribute to the literature on the causes and consequences of the Sicilian Mafia and other criminal organisations (Alesina et al. 2016, Acemoglu et al. 2013, Buonanno et al. 2015, Daniele and Geys 2015, De Feo and De Luca 2017, Del Monte and Pennacchio 2012, Dimico et al. 2017, Pinotti 2015).

The Spread of the Mafia in Sicily

We document that the spread of the Mafia in Sicily at the end of the 19th century was in part shaped by the rise of Peasant Fasci organisations, the first popular socialist movement in Italy. The Fasci articulated many of the grievances of the peasants and day labourers of Sicily. Chief among their demands were higher wages, land redistribution, better working conditions, longer-term contracts for land leases, the return to sharecropping arrangements, and the reduction in indirect taxes, which fell heavily on peasants (Romano 1959, Renda 1977, Casarrubea 1978). In an environment with weak state presence, this socialist threat induced landholders, estate managers, and local politicians to turn to the Mafia to resist and combat peasant demands. The historical record shows many instances in which the Mafia fought against the Peasant Fasci and collaborated with the military in suppressing protests and killing protesters.

Figure 1 depicts the distribution of Peasant Fasci in 1893 and the intensity of the Mafia in 1900 across Sicilian municipalities and shows a positive association between these two variables. This visual correlation cannot of course be taken as evidence of a causal effect for the usual reasons that omitted factors might be accounting for both the presence of Peasant Fasci and the Mafia in a municipality.

Our strategy to overcome this problem is to exploit one of the key drivers of the Peasant Fasci movement around this time, which was the very severe drought of 1893 that ravaged much of the Sicilian countryside, creating massive hardship for day laborers and small-scale tenants. We document in detail how the severity of the drought in a municipality acted as a powerful trigger for the Fasci. This relationship between rainfall (or drought) and the Peasant Fasci is robust to a range of geographic controls as well as many of the potential other determinants of the location of the Sicilian Mafia — such as the presence of sulphur mines and citrus cultivations, highly profitable activities in 19th century Sicily, and therefore prone to the protection (and the consequent rent-seeking) activities of the Mafia (Buonanno et al. 2015, Dimico et al. 2017, Del Monte and Pennacchio 2012). More importantly, we also show that it is rainfall during the growing season of 1893, and not rainfall during other months or rainfall in other years, that predicts the rise of Peasant Fasci organisations, and that rainfall in 1893 is uncorrelated with several social economic variables before 1893.

Motivated by this relationship, we use measures of rainfall or severity of drought as a source of variation in the location of the Peasant Fasci and then, using this variation, we attempt to estimate the impact of this peasant organisation on the Mafia (measured in 1900), which thus isolates the effects of the reaction of landholders and agricultural estate managers towards peasant organizations on the spread of the Mafia. We find robust and large effects from Peasant Fasci on the spread of the Mafia. Quantitatively, our estimates indicate that the presence of the Peasant Fasci in a municipality increases the Mafia index in that municipality by 1.5. To put this in perspective, note that an increase in the Mafia index from 1 to 2 corresponds to a change from little presence of the Mafia in a municipality to significant presence. This quantitative magnitude implies that as much as 37% of the strength of the Mafia in 1900 throughout Sicily may have been due to its deployment against the Peasant Fasci, thus suggesting that the episode we are focusing on may have played a pivotal role in the Mafia’s dominant position on the island. 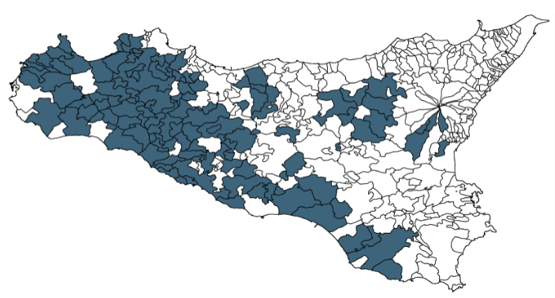 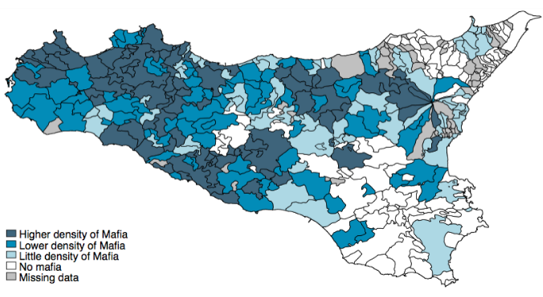 Notes: Top map reports in grey municipalities with a Peasant Fasci organisation in 1893; bottom map reports the intensity of Mafia presence in 1900.

The Impact of the Mafia on Local Economic Development

We use the source of variation in the location of the Mafia in 1900 to estimate its medium-term and long-term effects. The causal chain is that once the Mafia spread in order to combat peasant demands and organisations, it took root in the municipality and may have subsequently impacted medium- and long-run economic outcomes by weakening state capacity or directly impacting the allocation of resources (via corruption or coercion). Crucially, and related to the falsification exercises discussed above, we verified that rainfall or even severe droughts (in other years, and thus not working through peasant organisations) have no effect on local economic, social, and political outcomes. This bolsters our confidence that the causal chain outlined here is meaningful.

We find significant and quantitatively large negative impacts of the Mafia on literacy and various public goods in the 1910s and 1920s. For example, according to our estimates increasing the Mafia in 1900 variable from 1 to 2 (corresponding to an increase from little presence of the Mafia to significant presence) is associated with an approximately 10 percentage point decline in literacy in 1921 (about 20% of its mean) and a 5 percentage point increase in infant mortality (about 30% of its mean). These results, and their quantitative magnitudes, are quite robust.

How did the Mafia generate these negative effects? Even though we are not able to provide a comprehensive answer to this question, we provide suggestive evidence that part of the answer might lie in local politics. Historical and case study evidence indicates that the Mafia is often heavily involved in local politics. It discourages certain parties and candidates from campaigning and is also engaged in voter intimidation and fraud. This suggests that the footprint of the Mafia in local politics may be found in the concentration of votes across candidates in the municipality. Consistent with this expectation, our analysis shows that municipalities with relatively more intense Mafia presence feature systematically greater concentration of votes across candidates and consequently lower political competition in 1909 parliamentary elections. Quantitatively, the effects are even larger than for economic outcomes. For example, an increase from little presence of the Mafia to significant presence (from 1 to 2) is associated with a 30 percentage point decrease in political competition in 1909 (about 38% of its mean).

We also find negative effects of the Mafia on longer-term measures of economic development (in the 1960s, 1970s and 1980s) though these are generally weaker and often only marginally significant. This suggests that the impact of the Mafia has attenuated over time, which is not surprising in view of the decline of the Mafia during Mussolini’s fascist dictatorship and its subsequent reconfiguration. Nevertheless, our results suggest that the Mafia’s impact on concentration of votes across candidates has persisted strongly into the latter part of the 20th century.

Our work shows large negative effects of the Mafia just a few decades after its spread throughout Sicily in the last decade of the 19th century. The Mafia appears to significantly reduce literacy, increase infant mortality and limit the provision of a variety of local public goods. We also find a sizable effect of the Mafia on local politics – in places where the Mafia took root, the distribution of votes in parliamentary elections is highly concentrated. This suggests that the Mafia, in part by preventing parties and politicians not allied with itself from campaigning or even appearing in the municipality, may have significantly reduced local political competition. We conjecture that this might be one of the major channels via which the Mafia affects local economic development. Future work in this area investigating the exact mechanisms via which different criminal organisations influence the organisation of local government, local corruption, and local politics would be particularly informative. For instance, our strategy does not reveal whether the Mafia may have reduced local economic development because of local corruption, other effects of local criminal activity or because of its impact on local political competition.