Yves here. This post reaches an important, if disheartening conclusion: that financial regulation often does not work because it is reactive and clever financial players find ways to skirt regulations.

I wish the post had given some attention to higher-order question. It makes sense that a narrow, rear view mirror approach to scandals will have limited impact (and notice this study focused on scandals, as opposed to crises). Because mere scandals hurt only particular parties, they are not seen as an indictment of the financial sector. Indeed, people who use a scandal to push for broader reforms are depicted as cranks or opposed to capitalism.

But finance is best kept firmly leashed and collared. Classical economists argued for usury ceilings because otherwise banks would lend to wealthy gamblers, who were willing to pay high rates of interest, over sensible businessmen, who would borrow only if the debt charges were sensible in light of the commercial opportunity. More and more economists have published papers that conclude that a bigger finance sector is a drag on growth. The IMF found that the optimal level of banking system size and development was roughly that of Poland.

So we need systematic approach to regulation, rather than one-off moves. But the notion that financiers can safely be left to their own devices is so deeply ingrained that that isn’t happening any time soon.

Financial crises have long been a feature of our system. There’s a discernible pattern: Scandals are followed by regulation, only for a new set of scandals to emerge thereafter. Can the cycle can be broken?

During former Federal Reserve Chairman Paul Volcker’s famous remarks to members of the Economic Club of New York after details about Bear Stearns’ rescue by JP Morgan Chase and the Fed came out ten years ago, he pointedly observed that such actions carried an “implied promise of similar action in times of future turmoil.” The Fed’s intervention is commonly remembered as the start of a cycle of institutional collapse and government bailouts that defined the 2008 financial crisis. Volcker went on to observe that such crises have in fact been a “recurrent feature of free and open capital markets” and that “any return to heavily regulated, bank-dominated, nationally insulated markets is pure nostalgia.”

In our INET paper, “Corporate Scandals and Regulation,” we took on the question of whether regulators have been effective in overseeing financial markets over the last 200 years. Despite the voluminous literature on the economics of disclosure and financial reporting regulation, there is sparse empirical evidence on this topic in a historical, long-term context. We asked the question: “Are regulatory interventions in financial markets mere representations of delayed reactions to past market failures, or can regulators proactively preempt future corporate misbehavior?” From a public interest view, we would expect effective regulation to either prevent corporate misbehavior from occurring (ex ante) or quickly rectify observed transgressions (ex post). Have financial regulations anywhere been “effective” in this sense?

To answer this question, we developed an extensive historical time series of corporate scandals and regulations across 26 countries spanning the years 1800 to 2015. The data set draws on historical publications and regulations in 18 languages gathered in collaboration with local country experts and research assistants. We conducted the data collection in two steps. First, we used a coarse proxy of the underlying constructs and tracked how many of times the terms “scandal” and “regulator” were mentioned in the leading newspaper in each country and year. In a second step, we refined our search. Among the news articles we found, we identified those that cover actual accounting and other corporate scandals like the misrepresentation of financial statements (think Enron), the defrauding of investors (think Madoff), or the illegal business practice of bribing foreign government officials (think Lockheed). We also identified the voluntary conventions and rules that dealt with accounting regulation and investor protection in all those countries over the 200-year period.

As an example, the figure below displays the data structure for the United States over the 1851 to 2015 period. It plots the yearly number of times the terms “scandal” (solid line) and “regulator” (dashed line, axis on the right) are mentioned in The New York Times. These numbers include all sorts of scandals and are not limited to corporate misbehavior. When we analyzed the news coverage in more detail, we were able to identify 230 episodes of corporate scandals and 48 relevant regulatory initiatives for the U.S. (shaded bars, axis on the left). In this figure, the downfall of Bear Stearns represents just one observation in 2008. 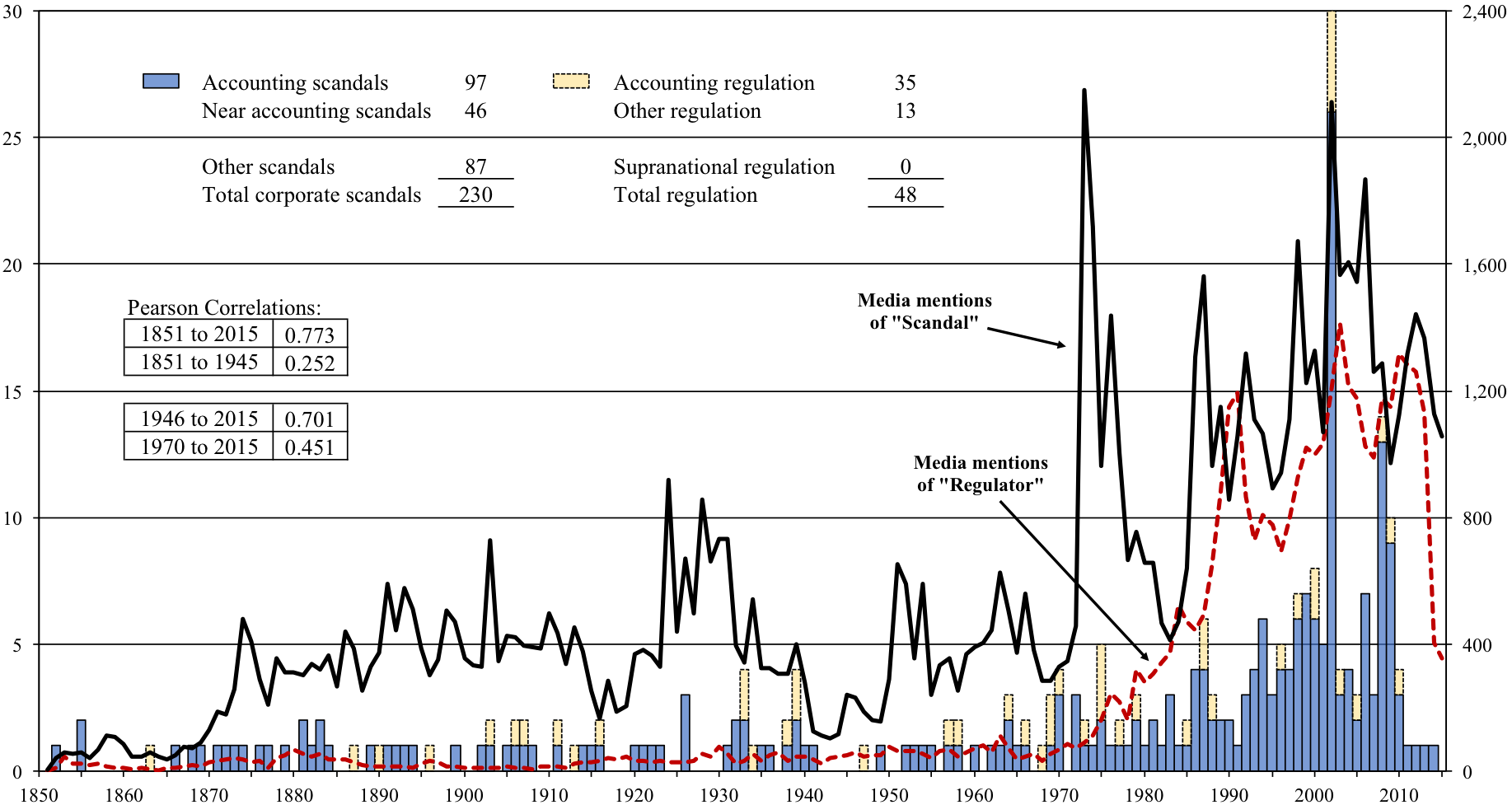 .
Figure: Episodes of corporate scandals and regulation in the United States over the years 1850-2015

Media mentions of scandals in The New York Times are very volatile. We observe multiple waves over time: the first in 1870, the second around the turn of the century, the third around 1930, and then again in the mid-1950s, 1960s, and 1970s. Thereafter the level of media mentions of both terms substantially increases.

The pattern suggests that the evolution of financial markets plays a key role in shaping both corporate misbehavior and regulatory action. The correlation between the two time-series is on the order of 70 percent for the entire period and after World War II, but only 25 percent before 1946. The pattern of actual corporate scandals and regulation largely mimics the media mentions, with select individual cases over long stretches of the sample period and a substantial increase after 1970. The year 2002 stands out with 26 cases of corporate scandals (e.g., WorldCom, Adelphia, Dynegy) and four regulatory events (e.g., the Sarbanes-Oxley Act).

In our global sample, we found that scandals and regulation are highly persistent over time. Corporate misconduct and regulatory action are not isolated events, but rather come and go in waves. More to the point, when we conduct a Granger causality test, which that examines whether one time series is useful in forecasting the other (e.g., can past scandals predict future regulations?), we find that over long stretches of time, corporate scandals act as an antecedent to future regulatory intervention. This pattern suggests that regulators are less flexible and informed than private entities and often take a reactive approach to regulation. Once something bad happens (e.g., the Enron scandal), public attention and pressure rises, and regulators then put rules in place to remedy the matter (e.g., Sarbanes Oxley).

At the same time, we find no evidence that regulations can effectively curb future corporate misconduct. Rather, today’s regulations are a strong predictor of future fraudulent behavior because firms are quick to adapt to the new rules and move their activities to unregulated areas, because regulators rely on explicitly laid-out rules to be able to identify and prosecute corporate wrongdoing, or because the new regulations have unintended consequences. Further analysis reveals systematic differences in the lead-lag relations of scandals and regulation over time and across countries.

Overall, our analysis of 200 years of corporate scandals and regulation provides evidence of strong time-series patterns. Scandals lead regulatory action, but the relation also goes in the other direction: Corporate scandals follow past attempts at regulatory reform. This finding prompts the question of how to break this cycle of scandals followed by bouts of regulatory activism, followed by new scandals, while keeping the long-term effects on the economy in mind. While we cannot answer this question, our results cast doubt on the historical effectiveness of regulatory action from a public interest view.