Lambert here: For the world richest elite, the British peerage seems to be doing a p*iss-poor, Bertie Wooster-level job of noblesse oblige. I think I’ve plated this before, but:

Inheritance practices have long attracted the attention of economists. Adam Smith was scathing in his criticism of primogeniture and entailment of the land.1 He argued that these laws increased inequality, “making beggars” of all but the first-born (Smith 1776). Recent studies that suggest that wealth inequality and the incidence of inherited wealth are both rising have once more highlighted the impact of inheritance practices (Piketty 2011, Atkinson 2013, Saez and Zucman 2016).

Our recent research finds new evidence of a two-way link between inheritance and fertility for the British peerage, the world’s richest elite.

The peerage was not pre-destined to be at the top of the distribution. Demographics were not on their side: around 1600, between 30% and 40% of married women in the peerage were childless. For the average commoner, the corresponding rate was only 10% (Figure 1). This threatened the survival of aristocratic lineages. 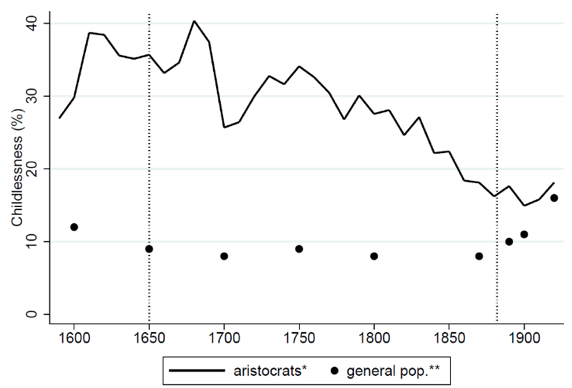 So, how did these aristocratic lineages survive?

As suggested by Adam Smith, inheritance practices helped British aristocrats to consolidate their wealth, and their position at the top of the distribution. This is only part of the picture. In a recent paper (Gobbi and Goñi 2018) we show that the inheritance practices of the aristocracy boosted fertility decisions in the extensive margin (in other words, having children or not). Inheritance rules contributed to the perpetuation of the British elite not only by preventing family estates to break, but also through changing fertility incentives.

An Inheritance Scheme that Boosts Fertility

From 1650 to 1882, inheritance in the British aristocracy was regulated by settlements. Settlements combined male primogeniture with a one-generation entail of the land. In the textbook case, the family head and the heir signed a settlement by which the heir committed to passing down the estate, unbroken, to the next generation (Habakkuk 1950). The social convention was strong. Few heirs refused to sign a settlement with their fathers (Stone and Stone 1984). Importantly, settlements were signed upon the heir’s marriage, as they also included provisions for the wife (Bonfield 1979).

Why would settlements affect fertility? When an individual was subject to a settlement, he could not break the family estate, sell it, or mortgage it. He may choose to have children, if he preferred the large, ‘untouched’ inheritance to go to his offspring. Otherwise a distant relative would have inherited the estates. For the settlement to change fertility incentives, however, the family head had to survive until his heir’s marriage. If he did not, the settlement was not signed, and the heir could have sold parts of the family estate.

Figure 2 summarises the results. Families signing a settlement had significantly lower childlessness rates. The magnitude of the effect is larger when we control for variables that potentially affected childlessness, such as the age of the spouse at marriage, or the number of stillbirths. Our results are robust to including family fixed effects, which capture any genetic, cultural, religious, or socioeconomic predisposition towards childlessness. In contrast, we do not find an effect of settlements on the intensive margin of fertility (births conditional on having at least one child). 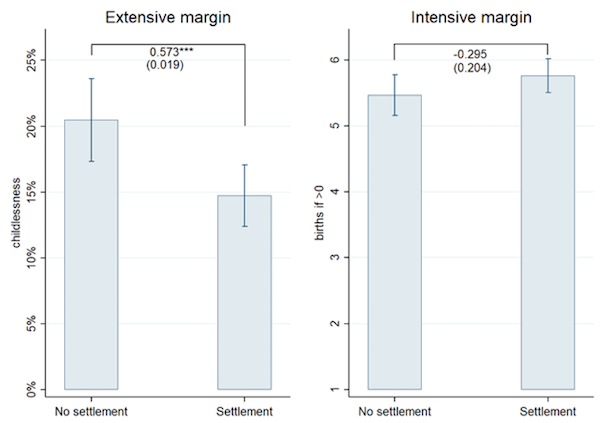 Note: We assume that a family signed a settlement (did not sign a settlement) if the father died after (before) his heir’s wedding.

It is possible that individuals may have chosennot to sign a settlement by delaying marriage until their father’s death. To address this, we exploit the birth order of the heir. Since families could not control the gender of their children, a male heir might not have been born until the second or third birth. In these families, the father is older, more likely to die before the heir’s wedding, and hence, exogenouslyless likely to sign a settlement.

Instrumenting settlements with the heir’s birth order, we find that signing a settlement increased the extensive margin of fertility by 83.5%, pushing childlessness rates close to the ‘natural’ rate of 2.4% (Tietze 1957). In other words, settlements contributed to the survival of noble family lineages.

In Scotland, peers could use permanent entails (Habakkuk 1994), unlike in England. Because these entails did not have to be renewed every generation, it should not have mattered for fertility whether the father died before or after his heir’s wedding. Our estimates for Scottish peers are close to zero, and significantly different from our benchmark results. This strongly suggests that we have captured the causal effect of settlements, rather than confounding factors correlated with the father dying before or after his heir’s wedding.

A settlement restricts an heir’s powers to manage the family wealth, so to answer this we develop a simple model of inheritance and fertility. We relax the assumption of exponential discounting across generations, commonly used in bequest models (Barro 1974). Instead, we introduce dynastic preferences, so that individuals would value their children’s well-being similarly to that of the future generations. This type of discounting is appealing for two reasons:

In the model, the family head prefers to use such a scheme to provide for his grandson. For the heir, signing a settlement – even if this restricts him in managing the estate – is a credible commitment to have children, which ensures that his father would pass down a larger share of the estate.

In sum, our model predicts that concerns over the production of an heir may shape inheritance rules – in particular, rules that restrict successors.

British peers were the wealthiest elite on earth. However, from 1650 to 1882 they did not freely dispose of their estates. On their marriage, they signed a settlement, renouncing to sell or mortgage parts of the family estate before passing it down. We find that such arrangements reduced the high rates of childlessness in the aristocracy, ensuring its survival.

Should we care about an elite who spent their time in debutanteballs and fox-hunting, and who lived “on money that were invested they hardly knew where?” (Orwell 1968). In light of the recent surge in inequality and the importance of inherited wealth, we argue that history can teach important lessons. We show that inheritance models treating fertility as exogenous can be misleading, because inheritance schemes affect fertility decisions which, in turn, can shape inheritance practices.

In addition, the study of settlements allows us to understand inheritance practices that restrict successors, which are increasingly popular. For example, trusts are likely the most popular inheritance scheme among the top 0.1% in the US (Wolff and Gittleman 2014).

Since Adam Smith, many have argued that inheritance schemes that restrict successors can perpetuate elite lineages. We suggest that they can so not only by consolidating wealth, but also through changing fertility incentives.

[1] Land entails are arrangements that restrict the successors capacity to break the family estate; i.e., sell parts of the land, mortgage it, etc.