‘Very angry badger’ forces parts of Scotland’s historic Craignethan Castle to close Independent. Unfortunately, a Google search on “Why was the badger angry?” turns up nothing. Many reasons, I suppose…

Evidence that Magnetic Navigation and Geomagnetic Imprinting Shape Spatial Genetic Variation in Sea Turtles Current Biology. “The canonical drivers of population genetic structure, or spatial genetic variation, are isolation by distance and isolation by environment…. Here, we present evidence for an additional, novel process that we call isolation by navigation, in which the navigational mechanism used by a long-distance migrant influences population structure independently of isolation by either distance or environment.” Like cell phones?

Activist lawyer burned himself to death to protest global warming New York Post. David Buckel. The only venue I can find that put what Buckel was protesting about in the headline? The New York Post [shaking my head].

This coal power plant is being reopened for blockchain mining CNet

IRS Says Fewer Than 100 People Have Reported Bitcoin Holdings So Far Investopedia (EM). Yves: “Wellie, the IRS could have a lot of fun if it wants to!”

The Middle East Correpondent for the New York Times (thanks to the miracle of Google cache, the tweet having been deleted): 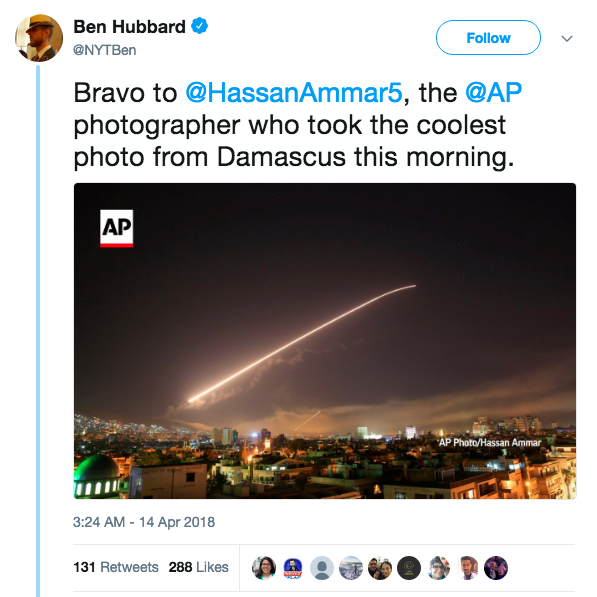 “Coolest photo.” A classic example of “the war gap,” as described here. This was a bad tweet, and Hubbard should have felt bad for making it.

I believe that the US, UK, &amp; France did the right thing by striking Syria over chemical weapons. It will not stop the war nor save the Syrian people from many other horrors. It is illegal under international law. But it at least draws a line somewhere &amp; says enough.

The latest chemical weapons attack against the Syrian people was a brutally inhuman war crime. Yet one night of airstrikes is no substitute for a coherent strategy.

Oh, a coherent strategy. Gotcha. Maybe ask Obama and his Secretary of State, author of the Libyan debacle? Presumably, if we had a strategy and just misplaced it, they know where to find it.

The President of the United States:

I can’t figure out whether Trump is just ignorant of history (and of history’s ironies), or owning Bush.

The U.S. just bombed 3 sites in Syria. Here’s what we know about why nations choose airstrikes. WaPo

Russia: Trace of Western-made nerve agent seen in UK samples AP. Documents said to be from an unnamed Swiss Lab working with OPCW.

Michael Cohen and the End Stage of the Trump Presidency Adam Davidson, The New Yorker. Big if true.

No, the FBI’s Michael Cohen Raid Did Not Violate Attorney-Client Privilege The American Conservative. “Democrat John Edwards was prosecuted (later acquitted) for soliciting and spending nearly $1 million in his 2008 presidential campaign to conceal his affair with Rielle Hunter, so this is not a crime normally brushed under the rug.”

If Democrats Listened to Their Voters, They’d Be Moving Left Vice

Oath’s new privacy policy allows it to scan your Yahoo and AOL mail for targeted advertising The Verge. I’m gotta change over…

‘Dear Mark, this is why I hate you.’ An open letter to Zuckerberg Wired

Our Dental Insurance Sent us “Free” Internet-Connected Toothbrushes. And this is What Happened Next Wolf Street

Afghanistan starts asking awkward questions about where small wars come from Duffel Blog. I’m thinking that, in the last days of the U.S.S.R., jokes were a more accurate indication of public opinion than surveys…

A Public Outcry Against a Wall Street Titan’s Name on a High School NYT. Stephen A. Schwarzman. “For starters, the public school should be renamed in his honor. A portrait of him should be displayed prominently in the building. Spaces at the school should be named for his twin brothers [, Kim Il-Schwarzman and Kim Jong-Schwarzman]. He should have the right to review the project’s contractors and to sign off on a new school logo.”

How the American economy conspires to keep wages down Guardian

Sanders decries flat earnings for most workers The Hill (UserFriendly). Good to see liberal Democrats and their media organs all over this. Oh, wait…

India and China: Lessons on How Not to Tackle Inequality The Wire

There’s an AI Running for the Mayoral Role of Tama City, Tokyo Otaquest. “If you assumed that artificial intelligence itself couldn’t run for mayor, you’re absolutely not wrong; that just happens to be where things get truly interesting. The two-person team pushing [“candidate”] Michihito Matsuda consists of both Tetsuzo Matsumoto, the vice president of mobile provider Softbank ($74 billion revenue), and former Google Japan representative Norio Murakami.” Rather like William Gibson’s Idoru.

The Business of Influence: #RevolveAroundTheFTC The Fashion Law. Influencers, rather like Magda in Gibson’s Pattern Recognition. 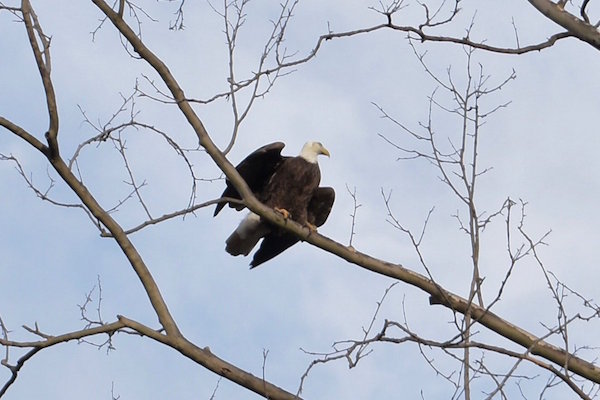 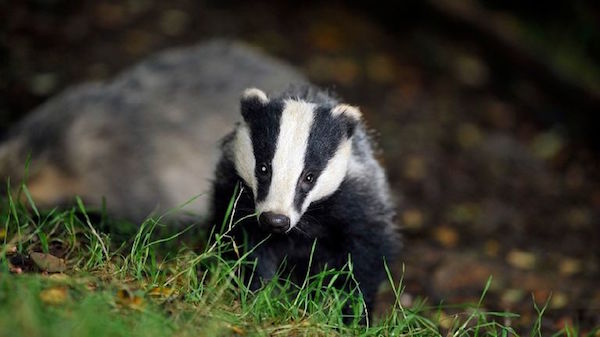