I wanted to let you know that Ted Eliopoulos, our Chief Investment Officer, has shared with us that he will be leaving CalPERS to move to the East Coast, where his two daughters attend college. He will be with us through the remainder of this year as we search for a new CIO and help that individual transition into the role. Ted is committed to a smooth transition to minimize any disruption to CalPERS as he hands over the INVO leadership to a new CIO.

Ted joined us in 2007 from the State Treasurer’s Office. During this time, he has been instrumental in a number of important accomplishments, including greatly reducing the number of external managers and increasing the amount of assets managed by CalPERS’ own investment professionals. Ted’s commitment to reducing cost and complexity will benefit our members and fund long into the future.

Ted has been a thoughtful and calm presence at CalPERS, willing to listen to diverse points of view and explore creative solutions to the challenges we face. Under his leadership, we ended our hedge fund program and began examining new business models for private equity that could add significant value to the CalPERS fund. Ted also established the Investment Office’s first Diversity & Inclusion Committee, and last year he played a key role in establishing a mentoring partnership with the mayor of Sacramento that enabled several area high school students to spend the summer working and learning in the Investment Office. If you know Ted, you’ll know how important mentors were in his own life and why being a role model for young people means so much to him.

I am thankful that we will have him here to assist with a seamless transition to new leadership in the Investment Office over the next few months. On behalf of all of CalPERS, I want to wish Ted much success in the future and thank him for all he’s done on behalf of California’s public employees.

Quite honestly, I was shocked to read this missive. As much as we have been critical of Eliopoulos, regarding him as a generally capable individual who wound up in a role for which he was not qualified, when the investment environment bloodied many top professionals, this was damning with too obviously faint praise. The fact that she brings up Eliopoulos mentoring several high school students for one summer in a mere two paragraphs on his accomplishments is a slap in the face. It is if she were struggling to find something positive to say about his over-ten-year record in top level roles. Frost should be ashamed of herself.

By contrast, the Wall Street Journal has a far more comprehensive list of Eliopoulos’s accomplishments, as well as some of his less successful initiatives.

The great irony is that Eliopoulus would have been a capable CEO of CalPERS, yet from what I can infer, he never tried to put his hat in that ring when CEO and close ally Anne Stausboll retired in 2016. The CEO is a political and administrative position, and that would have been a much better fit with Eliopoulos’ skills. Former board member JJ Jelincic said that Eliopoulos was not qualified to be Chief Investment Officer, which was obviously true given Eliopoulos’ credentials and experienced. The board censured Jelnicic for his observation, and time has now shown Jelincic to have been correct.

In an era of higher prevailing returns, Eliopoulos would not have been tested to the degree he was. The conundrum for investors all over the world, and it was most acute for long term investors like pension funds, was that central banks all over the world were punishing savers via negative, sometimes deeply negative, real interest rates. That meant investors were chasing for yield and bidding the prices of risky assets up to the degree that they were underperforming relative to their downside potential.

CalPERS decision at the end of 2014, to exit hedge funds, which Frost deigns to mention only in passing, sent shock waves through the investment world, since it legitimated what other major investors should have done long ago: questioning whether these high-fee, exotic strategies delivered their promised performance. By early 2016, further deterioration in the hedge fund performance led to large scale redemptions across the industry.

However, Eliopoulos was unwilling or unable to take the same logic that led him to question correctly question hedge funds to its logical conclusion with an investment strategy that has wound up damaging CalPERS as well as Eliopoulos: private equity. Recall that the pay to play scandal that led to former CEO Fred Buenrostro to be sentenced to four and one-half years in Federal prison for taking bribes implicated three other then-current board members. Yet the firm that paid far and away the biggest bribes, erm, fees, nearly $50 million dollars to former board member, later placement agent Al Villalobos, wasn’t even made to sit in the penalty box, as is the norm for defense contractors.

CalPERS, like most of its public pension fund peers, pinned undue hopes on private equity, even though as time went on, the data kept confirming that private equity from the early 2000s onward was failing to meet its benchmarks. Eliopoulos had the misfortune of inheriting a head of private equity, Real Desrochers, who on paper had a solid background, but proved in some embarrassing exchanges with Jelnicic in open sessions not to understand some basics of private equity investing. Desrochers also had a reputation for being difficult which some market participants see as having contributed to some of CalPERS’ alleged difficulties.

CalPERS got itself in further hot water in private equity due to staff acting as if they could blow off reasonable, even basic questions, and take the position that they knew better when they didn’t. That backfired dramatically in 2015. Former Chief Operating Investment Officer Wylie Tollette tried brushing off questions by Jelincic by not only admitting that CalPERS didn’t track carry fees, one of the largest charges CalPERS pays to private equity firms, but that no one could. This led to an explosion of negative press coverage, forcing CalPERS to retreat and gather the data.

To try to shore up its image and reassure the board, CalPERS then held a full day private equity workshop in November 2015. That didn’t go so well either, as we explained in a series of posts.

Eliopoulos did have the right intuition, of trying to lower private equity fees and costs. It is too bad that he didn’t follow it to its logical conclusion, of abandoning private equity entirely, doing private equity replication in public markets (which would probably have a run of a few years until other investors piled in, but that would have bought CalPERS time to strengthen internal capabilities), or of doing much more in house to cut out the costly middlemen. A study published in early May found that public pension funds with higher allocations to “alternative” investments did worse than ones who were more cautious (to CalPERS’ credit, it has only a moderate commitment to these strategies). From our post summarizing the results:

The latest report from the Maryland Public Policy Institute is short and succeeds at clear and to the point. It is also damning. Its implications are clear: public pension funds all over the US would do better to fire their investment staffs and hand management over to Vanguard, using a simple mix of 60% stocks, 40% bonds.

Moreover, the magnitude of the shortfall relative to the bog standard allocation for long-term retail investors is large. A 60/40 portfolio earned an average annualized return of 6.40% for the ten years ending June 30, 2017. That happens to be a full 2% more than what CalPERS earned on average over this period. To determine the impact more precisely, you’d need to look at the differences in performance on a year by year basis. However, if you simply take CalPERS total assets at the end of fiscal year 2007, which from what I can infer was $254 billion (remarkably, the 2007 CAFR does not seem to be on line any more), and compound a simple 2% forward, you get an extra $55.6 billion. If you added this to its calendar year end 2017 total assets of $350 billion, you’d have $405.6 billion, which would put it an 82.3% funding level versus its 71% mark at year end.

Eliopoulos took on private equity’s high costs, but in an unduly cautious way, by reducing the number of funds CalPERS invested in, which meant CalPERS was participating heavily in large to mega “buyout” funds. On the one hand, big commitments per fund meant CalPERS got the lowest fees (bigger funds have tiered pricing, with the biggest investors receiving what amounts to fee volume discounts). But buyout funds underperformed private equity as a whole, dragging down performance. Oddly, CalPERS was reportedly a laggard in another approach for reducing cost, namely, co-investing, which is committing additional capital to a particular company along side the general partner, cutting out the management and often the carry fee.

In addition, Eliopoulos and Stausboll, who had been proteges of former state Treasurer Phil Angelides, made the mistake of not adapting to the new normal of central bank super low policy rates and adjusting CalPERS return assumptions downward soon enough. Even though municipalities are now howling over increased pension charges and expected future increases, taking the bitter medicine years earlier would have meant less pain overall. As a stakeholder survey, to be presented at tomorrow’s Finance and Administration Committee, shows, CalPERS image has fallen sharply with senior managers at municipalities and agencies that have CalPES manage their pension plan: 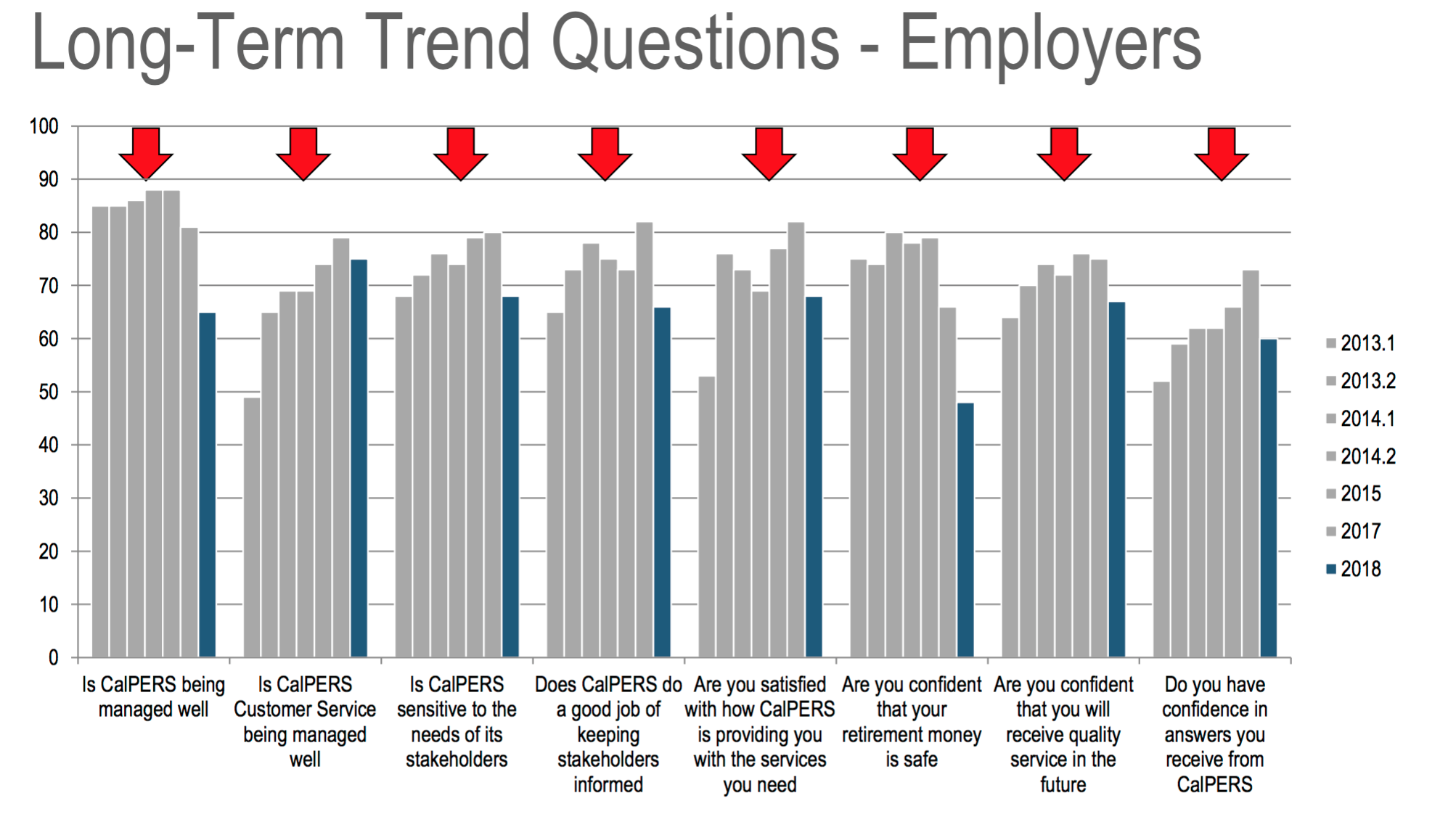 Even though this is only one “stakeholder” group, it is disproportionately influential. First, the leadership ranks make their views known and some, perhaps most, employees will take heed. Second, the in-state press finds these officials a good source of quotes, so having their worries about pension safety bruited about is something CalPERS really would rather not have happen.

Another indicator of the cost of the failure to reduce return assumption sooner is that CalPERS is getting more and more critical press coverage. The media is no longer anywhere as willing as it once was to give the giant pension fund the benefit of the doubt when even with an unexpected Trump runup in stock prices, CalPERS is still only 71% funded.

The problem with Ted’s exodus is that CalPERS now has way too few supervising adults in its investment office. Even if Ted were to apply himself fully to CalPERS during his remaining time in office, lame ducks have limited sway and often need to make only interim decisions so as not to tie the hands of their successor. CalPERS does have a highly qualified new Chief Operating Investment Officer, Elisabeth Bourqui, who was scheduled to start May 14 but she is not yet in place due to visa issues. CalPERS has not hired a new head of private equity, apparently due to Eliopoulos’ determination to push his private equity outsourcing scheme through (more on that in future posts). CAlPERS’ head of fixed income, Curt Ishii, who has long had an industry-leading performance record, retires in July.

Turnoever is usually a negative for the performance of investment firms. But CalPERS needs to make changes If it can attract more professionals of Bourqui’s caliber, the fund may finally make a break from its post Fred-Buenrostro misguided priorities and focus on the needs of the beneficiaries as opposed to the needs of staff.