Readers may recall that we posted last week on the fact that CalPERS’ Charles Asubonten was on CalPERS’ board meeting agenda to run most sections of today’s Finance and Administration Committee meeting, per our Daily-Mailish headline: CalPERS Has Chief Financial Officer Charles Asubonten, With Verifiable Misrepresentations on His Resume, Presenting to the Board Next Week. What Gives?

We asked California readers to write their state legislators, and include the heads of the Senate and Assembly pension committees, the State Treasurer and Controller, who also sit on the CalPERS board, and CEO Marcie Frost. Many of you got right on it and sent out postal letters and e-mails.

Your messages elicited a response. Reader Brandon e-mailed me yesterday:

From: Brandon
Subject: To Yves – RE: CalPERS Has Chief Financial Officer Charles Asubonten, With Verifiable Misrepresentations on His Resume, Presenting to the Board Next Week. What Gives?
Date: May 14, 2018 at 7:46:04 PM EDT
To: blogger@nakedcapitalism.com
I thought you might like to see this… She replied to me AND ALL the Senators, Assemblyman, Congressional Representives, etc that I included in my email. Ha!
Response from Marcie Frost:

It would appear that CalPERS initiated a disciplinary process, as they are called in California Department of Personnel Administration speak, presumably for:

Fraud in securing appointment
.
Includes falsification of information on an application or health questionnaire to such an extent that an employee would not otherwise have qualified for the job, or omission of required information pertaining to criminal or adverse work history; also covers cheating on examinations or using other illegal means to obtain employment

The Supervisor’s Handbook contains a very detailed description of how the process works. Bear in mind that because Asubonten is still on probation, the bar for misconduct necessary for him to be dismissed is comparatively low. Readers who have any knowledge of these procedures, please pipe up!

If CalPERS has decided to dismiss Asubonten, he will not be able to keep his job. As we showed with extensive, supporting documentation, Asubonten told multiple, verifiable lies on his resume. He also filed a Form 700, a financial conflicts of interest form that does not comply with the required standards. Finally, even a heavily redacted version of his employment application showed additional misrepresentations. Employment applications are filed under penalty of perjury. Perjury is a felony.

Asubonten will still try to sue CalPERS. Even though by any logical standards, Asubonten has no case, not having a case does not prevent people from showing up in court. And Asubonten has a history of being litigious and behaving in bad faith. Recall that we discussed that he tried suing his former employer Palabora Mining Company and Rio Tinto for supposedly underpaying his bonus and denying him and his family the benefit of return flights to the US. If your read the filing, it is hard to fathom how Asubonten ever got the idea in his head that he might win.

It was astonishing that Asubonten’s case was not dismissed, since as a condition of his separation, he had signed an agreement waiving the right to all claims, meaning forswearing litigation. And this was after Rio Tinto had been much nicer to him than they had to be, by letting him stay in a company house and paying his kids’ tuition for three months longer than they were required to.

However, there is one reason Asubonten might not sue: if CalPERs” attorneys in discovery can go full proctological in discovery on Asubonten’s “private equity” business, or more accurately, what his sources of income were after he returned to the US, and whether his reported income was high enough to support his lifestyle.

Asubonten has not held up well under scrutiny. A well-constructed response could allow CalPERS’ attorneys to go over Asubonten’s history with a fine-toothed comb and make it public record. Given how Asuboten has gone to unusual lengths to hide information about his business, like not even publicizing a business name phone number, or office address, he might want to think twice before doing even more damage to himself.

Finally, it appears that CalPERS staff is trying to mislead the board on the level of media coverage that l’affaire Asubonten has received. If you look at the latest CalPERS
Office of Public Affairs Strategic Communications Report, to be presented today, you will see in the microtype below, the headline to the Michael Hiltzik story, Questions about new CalPERS CFO’s background and experience should be taken seriously by the pension fund. The table shows the story as appearing in the Burbank Leader. Only if you look at the barely readable footnote number 4 (difficult to interpret even with the font size greatly enlarged) and then go find the actual footnote, two pages later, in even teenier type, do you see that the story ran in the Los Angeles Times. 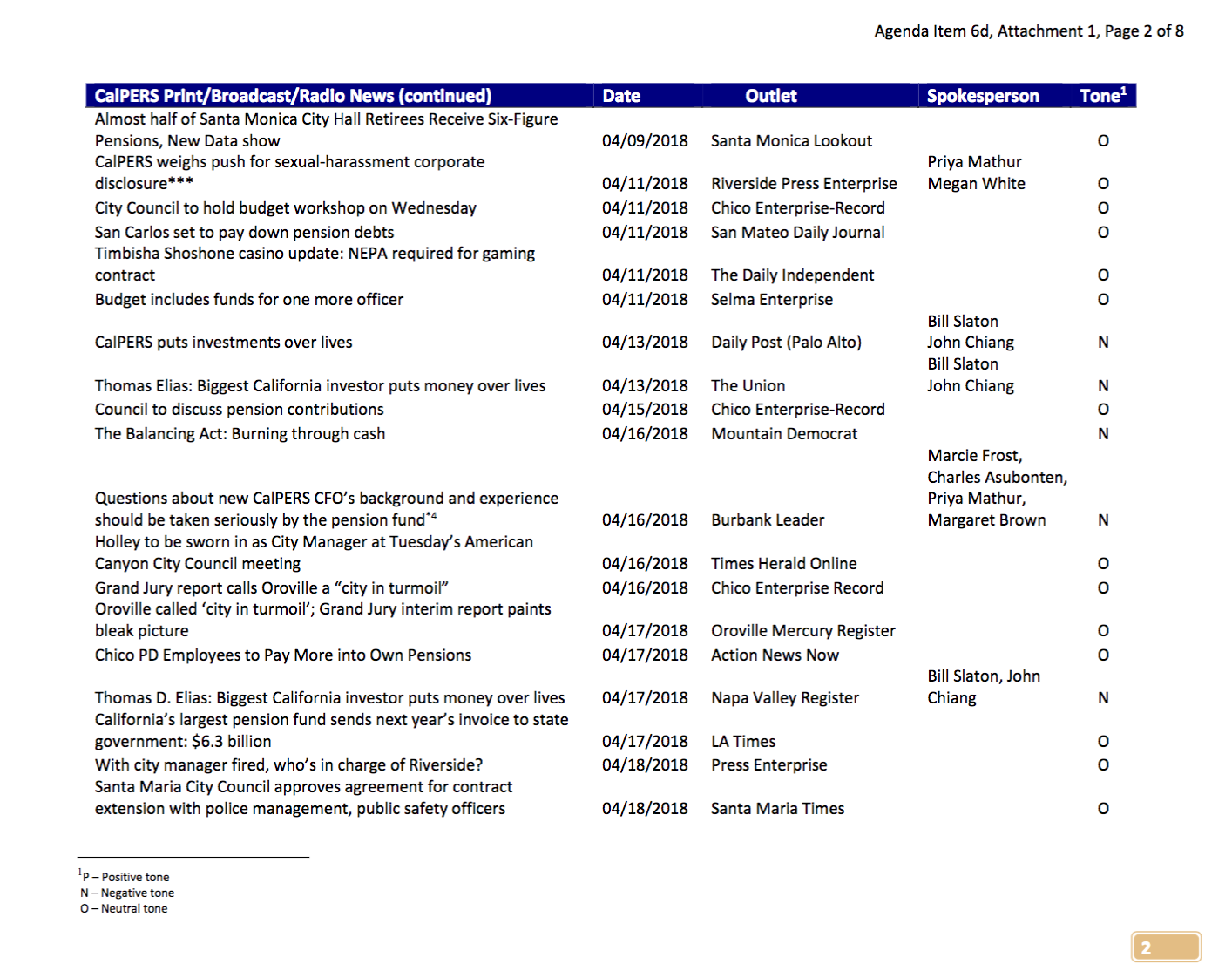 In keeping, there is no listing whatsoever for the April 20 Sacramento Bee story, Inflated-résumé claims prompt review of top CalPERS official.

This was the same behavior that the CalPERS Office of Stakeholder Communications exhibited with its now defunct, copyright violating Daily News Summary. Around 2014, on the occasions when we looked at it, it provided a decent news roundup and also included all major CalPERS news stories, whether favorable or not. As CalPERS started getting more critical coverage of its private equity program, the selection of CalPERS articles became very much skewed towards the positive ones. It looks like the bubble-blowing machinery is still very much in use at CalPERS.