Yves here. In addition to the state of the Labour Party being of interest to our UK reader, the struggle over its direction is also instructive for bona fide progressives who are seeking to wrest control of the Democratic party from the Clintonistas and other corporate interests.

Perhaps I’m missing something, but the UK press appears to be trying to turn solid gains by Labour in local elections by spinning it as a failure against more optimistic expectations. When I read criticism that Labour didn’t win in Chelsea and Kensington, it was hard for me to take the standard set for success seriously. Even if that was a target, having lived near that area when it was less posh than now, that strikes me as nuts.

This tweet is a bit unclear: this was the best result for Labour in London since 1971:

BBC vote projection has put Labour as the largest party if this was a general election. How on earth will Corbyn recover from this devastating result 😂😂 pic.twitter.com/nqR2UOvpbW

As things stand Lib Dems have gained more seats than Lab (66-58). That definitely wasn't in the Corbyn-surge script.

But as Lambert said, “Fair argument, assuming the surge script wasn’t ginned up too.”

By Paul Rogers, professor in the department of peace studiesat Bradford University, northern England. He is openDemocracy’ sinternational security adviser, and has been writing a weekly column on global security since 28 September 2001; he also writes a monthly briefing for the Oxford Research Group. His latest book is Irregular War: ISIS and the New Threat from the Margins(IB Tauris, 2016), which follows Why We’re Losing the War on Terror( Polity, 2007), and Losing Control: Global Security in the 21st Century(Pluto Press, 3rd edition, 2010). He is on Twitter at: @ProfPRogers Originally published at openDemocracy 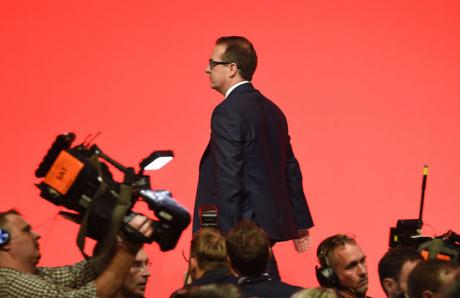 Owen Smith leaves the floor following the announcement of the winner in the Labour leadership contest between him and Jeremy Corbyn at the ACC in Liverpool, September, 2016. Joe Giddens/Press Association. All rights reserved

In spite of the remarkable and thoroughly unexpected success of the Jeremy Corbyn-led Labour Party in the 2017 general election, there remains bitter opposition to him and what he stands for within the parliamentary party. It comes out whenever he is under pressure, as with the Salisbury poisoning, the bombing of Syria and the anti-semitism controversy, so much so that among ordinary Labour members there is considerable anger as they see backbenchers latching on to such issues primarily for attacking Corbyn and his team.

What adds to this in their minds is that it comes on top of the relentless pressure from right-wing media outlets, one more reason in their view why he deserves support – not interminable attacks from some of his own backbenchers.

Whatever the rights and wrongs of the whole topic, there is still a question that has not been adequately answered – why is there this deep and almost visceral opposition to a leader who remains massively popular in his own party away from Westminster and which, under his leadership, has nearly tripled in size?

Much of the reason lies not with a deep ideological divide, though that might play a part, but with the personal circumstances of many Labour MPs who have found the political rug pulled from under them. Previous certainties have disappeared and have been replaced by a political climate that makes little sense.

For them, in short, this can’t be happening or at least shouldn’t be happening. They have faced not a double whammy but six shocks, all in the space of less than three years, half of them in a single devastating three-month period in the summer of 2015. Appreciating this more fully may make for a better understanding of what has happened in the parliamentary party and also provide a pointer to the future.

The origins of the current mood go back to the election of Ed Miliband after Labour’s 2010 election failure. For most centrist Labour MPs (the great majority at the time) this was too much of a shift to the left, especially as their obvious candidate, his brother David, had been blocked by trade-union voting power. The subsequent five-year coalition government was not a happy period for them, but with the start of 2015 general election campaign there seemed a prospect of happier times with polls pointing to a narrow Labour victory or at least a hung parliament with Labour the largest party.

Labour MPs come in all shapes and sizes of politics, motivation and ambition, but embedded in the great majority of them is the hope of personal advancement. This should come as no surprise since it goes with the territory and may well be combined with a strong sense of justice and a genuine commitment to wider society. Indeed these apparent opposites are readily joined in a reasonable belief that change can only come with access to the levers of power.

When the 2015 election was called there was not so much a hope as an actual expectation that Labour would be in power in some form. For inexperienced but ambitious MPs, the prospect would be a first step on the ladder of advancement, for more senior members it might be a cabinet seat or even one of the great offices of state, and for some the prospect of an eventual tilt at the top job. True it would be under the worryingly if mildly leftist Ed Miliband, but that tendency could always experience progressive moderation as realities expressed themselves.

The first shock was the dashing of these hopes as David Cameron’s Conservative Party exceeded expectations and won an overall majority. This was a real a punch in the gut, but there was at least one saving grace in that with Miliband resigning immediately after the election Labour might now get an acceptable social democrat to lead it out of the quasi-leftist wilderness. For many Labour MPs it might therefore turn out to be a matter of ambition postponed rather than dashed.

The second shock was the subsequent leadership election in which a rapidly growing party membership turned the world upside down and elected Jeremy Corbyn, of all people, as the new leader. He was a decent enough man in the view of most Labour MPs but definitely part of a way-out fringe of leftist radicals that in no way represented the party as these MPs knew it, and would surely be an electoral disaster.

Behind this lay the third shock – not just being out of office but being in a party with a membership greatly supportive of the new leader who offered centrists little chance of personal advancement. In particular, for mid-career Labour MPs it was no longer ambition postponed but ambition hopelessly dashed. So resentful and oppositional was the mood in Westminster in autumn 2015 that people close to Corbyn had reason to believe that plenty of Labour MPs would much prefer to lose a general election than win it under Corbyn.

What made it even more difficult for such MPs to take was that the very nature of the Labour Party was changing beneath them. Just about all of the central control of the Blair era was disappearing and it could simply not be put down to a coterie of militant infiltrators, however comforting that explanation seemed. There simply weren’t several hundred thousand hard leftists in the country coming suddenly from nowhere. Something else was happening which could not readily be understood.

Worse was to come later on with two more shocks. The fourth in the series was the failed 2016 Labour party coup attempt after the Brexit referendum, followed by Jeremy Corbyn’s even more dominant performance in the subsequent Labour leadership election. This made it absolutely clear that he had a deeply embedded popularity that would take an utter political earthquake to shake (see “Jeremy Corbyn: the future not the past“, 28 April 2016).

That provided the fifth shock – the extraordinary general-election campaign in 2017, starting with Labour up to fifteen points behind and with Theresa May expecting to win by one of the largest landslides in history. That outlook held in the early weeks of the campaign and was boosted by the Conservative successes in local-government elections a month before polling day. Then, and against all expectations, things began to change and a few commentators began to suspect something happening below the surface (see “The Corbyn crowd, and its message“, 18 May 2017; and “Corbyn, and an election surprise“, 26 May 2017).

By the final week of the polls Labour was on a roll, boosted by a popular election manifesto, a weak Conservative performance and, above all, the ability of Jeremy Corbyn to attract a level of popular support shown by crowded campaign meetings wherever he went. After all, when was the last time that a potential prime minister in Britain had people climbing trees, lampposts and on to roofs at a political meeting, obliging the police hurriedly to close roads?

So look at it from the position of your suspicious Labour members of parliament. For them the real significance of last year’s election was that it was the final nail in the coffin of opposition to Corbyn – against all the odds he had turned out to be electable!

Where does this leave the party now, and how does it relate to the persistent criticism that Jeremy Corbyn has experienced from his back-benchers over the past two months, moderated only in the short-term by the current Conservative disarray over the Windrush scandal and Brexit disarray?

The early signs are that many Labour MPs still cannot come to terms with the changing nature of the party but, far more important, they cannot face up to the admittedly difficult prospect that they are no longer in tune with a wider mood in the country. If this is moving anywhere it is in the direction of Corbyn’s vision rather than that of Blair. For many Labour MPs that is the sixth and biggest shock of them all.

Will they come round and accept the new political landscape? Many will, if grudgingly, but others will not. This leaves a problem for the Corbyn team because if Labour does get into power, the opprobrium heaped on Corbyn by dominant right-wing media interests will be hugely intensified. He will need all the help he can get and this will require a much more united parliamentary party.

That is primarily the responsibility of those MPs who still won’t support him, but it may be aided if the Corbynistas seek a little more understanding of the attitudes and feelings of those MPs.