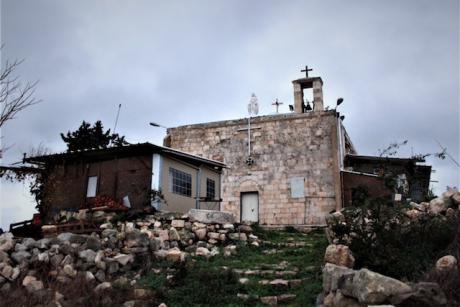 On a hilltop in northern Galilee, a small church stands alone surrounded by rubbles. It is the last remaining building of the Palestinian village of Iqrit, which was depopulated and destroyed following the foundation of the State of Israel on May 15, 1948.

“This place means a lot to us, it reminds us of where we come from”, says Samer Toume, whose grandparents were among the 600 Christians expelled from Iqrit by the Israel Defense Forces nearly seven decades ago.

The story of Iqrit is similar to that of the other 530 villages that were razed to the ground in a process that came to be known to the world as the establishment of Israel — and to Palestinians as the “Nakba”, the Arabic word for “catastrophe”.

The first European Jews landed on the shores of Palestine and established early settlements in the 19th century. In 1948, Zionist forces systematically took over land, expelling people from their homes and relinquishing many to live as refugees in isolated enclaves.

The foundations of Israel are rooted in a colonial project that has modernized its face but continues to subject Palestinians to military occupation, land dispossession and unequal rights. Seventy years later, the wounds of the Nakba are still open, as Israel prohibits over five million refugees the right of return – while guaranteeing citizenship to anyone who can demonstrate Jewish ancestry.

“Israel doesn’t let Palestinians go back to their lands. In Iqrit, we are only allowed to return as dead people to get buried here”, asserts Samer, 28, pointing to a cemetery not far from the church. Other activities such as rebuilding the demolished houses or cultivating crops, remain illegal.

Nearly six years ago, however, members of the third generation of displaced inhabitants of Iqrit decided to challenge the rules that keep them apart from their lands and started resurrecting the village.

“Through a rotating system of shifts, we keep a continuous presence here. During the day, we go to our workplaces in towns in the area and then return to Iqrit”, tells Samer, who works in a medical start-up in the city of Haifa. “We also hold weekend gatherings and annual summer camps to engage residents from younger and older generations.”

“We want to keep the memory of Iqrit alive.”

Samer’s powerful story is a rather exceptional one. Unlike Iqrit, many of the areas depopulated in 1948 were either settled by Jewish migrants or transformed into forests and military zones by the Israeli authorities, effectively covering up the traces of the Nakba.

Moreover, being able to visit the village from where one’s own ancestors were expelled is, unfortunately, not possible for most Palestinians. Since Samer’s relatives fled to locations within Israel and were later granted citizenship, he is free to move around. On the other hand, most Palestinian refugees still live in the occupied territories or in other countries in the region, often in camps that were hastily built in the 1950s as temporary accommodations. As such, they cannot cross into Israel without prior permission.

According to Israeli historian Ilan Pappe, the forced displacement of Palestinians amounts to ethnic cleansing.

“The tale of Palestine from the beginning until today is a simple story of colonialism and dispossession, yet the world treats it as a multifaceted and complex story — hard to understand and even harder to solve”, affirms Pappe in the 2015 book On Palestine, co-written with American scholar Noam Chomsky.

Over the course of the past decades, the status of the Palestinian diaspora has only deteriorated, or far worse: it has become institutionalized. The Oslo accords of ‘93 and ‘95, while celebrated in the west as the first step toward a two-state solution, did not address the right of return of refugees, thereby condemning them to a limbo of effective statelessness.

The treatise partitioned the West Bank into three areas: area A under Palestinian Authority (PA) control, area B under joint Israeli-Palestinian administration, and area C, run by Israel. The accords, which should have paved the way for the creation of a Palestinian state, instead led to increased Israeli presence in the territory through the expansion of Jewish settlements. Scholar Edward Said pointed out that Palestinian leaders had effectively given up the right to self-determination in most of the West Bank’s territory in exchange for Israel’s acknowledgement of the PA, and referred to the agreement as “an instrument of Palestinian surrender, a Palestinian Versailles”.

Oslo’s failure is particularly evident in area C, a scarcely populated district comprising more than 60% of the West Bank and most of the territory’s natural resources, where Israel retains exclusive control over law enforcement, planning and construction. Moreover, Israel Defence Forces are in charge of all borders within and around the West Bank. These arrangements, which have been repeatedly condemned as attempts to de facto annex area C, begin to scratch the surface of what the Israeli occupation looks like today.

Securitization policies are a double-faced coin: for every measure implemented for the safety of the Jewish citizens of Israel, restrictions are being imposed on the rights to movement and development of Palestinians. The complex system of status-associated rights and obligations has created hierarchies within the Palestinian community. In this apartheid-like structure, individuals are required to obtain different levels of authorization in their everyday lives solely based on where their families migrated to in the Nakba.

Palestinians with Israeli citizenship are subject to discriminatory practices in education, public services and the legal system. That’s the case of Samer Toume, who lives as a second class citizen in Israel and faces challenges in trying to reconnect with his origins in Iqrit.

But even the lives of Palestinians under PA jurisdiction are heavily shaped by the Israeli occupation. Hassan Darwish (name changed to protect his identity), 27, was born prematurely in an Israeli hospital in Jerusalem, but he grew up in the city of Ramallah in area A. The realities of living under a military occupation became all too obvious to Hassan at the age of 12, when he was arrested and sentenced to two years in prison for throwing rocks at Israeli soldiers during a clash in the refugee camp where his grandparents live.

“I was playing with my cousin in the Jalazone camp when Israeli soldiers came in”, tells Hassan. “There was a big clash, all the kids started running towards it and I ran too. In my mind, we were just playing, throwing stones around. After that, I woke up in prison.”

Recalling the events brings a note of anger and frustration to Hassan’s voice. “I was 12, you know what that means? I was a child, what could I have done against Israel? Israel, what Israel? I didn’t know anything.”

The loss of personal freedom is a recurring theme in Hassan’s story, and it permeates all aspects of the Palestinian human experience. High unemployment rates in the West Bank have pushed many Palestinians to seek jobs in Israel or in the settlements, where they are hired as cheap labour, often illegally. Leaving the territory without a license means risking imprisonment and, according to Hassan, permits get denied all the time.

“We live in a huge prison”, he continues. “If you, as a human, are working everyday, and you want to go on a trip with your family, or friends or girlfriend, you have nowhere to go. Our seaside is occupied. If you want to travel anywhere you will have to empty your car first, because any tool that could possibly be used to hurt someone, even a nail clipper, could get you arrested or even killed.”

“A friend from Brazil brought me a stone from Jerusalem. It is strange, because it is the city where I was born, but after 27 years I cannot go there and pick it up myself. I showed it to all my friends: they felt happy because we could touch it, and smell it.”

Even more dire is the situation of Gaza, where residents are treated as enemy combatants and subjected to a land, air, and sea blockade that has shrunk the territory’s GPD by up to 50% since 2007, according to the World Bank.

On March 30, 2018 Gazan refugees launched a series of weekly demonstrations called the “Great March of Return”, programmed to end on May 15, the Nakba Day. As thousands have gathered near the border to protest their isolation and symbolically set on a journey back to their land, the Israeli Defense Forces have responded with tear gas and live ammunition, leaving dozens wounded or killed.

As Israel continues violating the rights of Palestinians, the international community has repeatedly turned a blind eye. Initiatives in favour of a political solution to the decades-long conflict are often blocked by the US in the United Nations Security Council.

According to Eitan Bronstein and Eléonore Merza, founders of the Israeli NGO De-Colonizer, it is also in the interest of Israeli Jews to acknowledge Palestinian narratives.

“The principal victims of this regime are, of course, the Palestinians, but Israeli Jews have also paid the price of conquest since 1948 by living in constant fear, with no hope of peace”, they write on the NGO’s website. “In other words, we believe an essential key to our future here is deeply rooted in our past.”

As for his future, Hassan remains hopeful. “When I was arrested at 12 years old, I didn’t even know what my dreams were. But now, I have been through so much, and all the hardship has made me who I am. I know what my dreams are: to feel that I have a land, not just to live on one.”