Yves here. While Mr. Market got in quite a tizzy today over 5 Star and Lega’s abandonment of their effort to form a coalition government after the President Sergio Mattarella nixed their choice of economy minister, Paolo Savona. This has produced a first-class political crisis. The technocrats, in trying to appease Mr. Market, has done the reverse.

Mattarella is planning to form a caretaker government and wants it to pass a budget and then hold elections, which would have the convenient effect of tying the upstart, wannabe deficit spender populists from getting their hands on the fiscal spigot for another year. Mattarella doesn’t have the votes in Parliament to carry this off unless some members of the failed coalition lose their nerve.

Talk last night was of elections in the fall. Talk of yesterday was that they might be held as early as July. But we also are in the midst of what Lambert calls an overly dynamic situation. For instance, as we anticipated, 5 Star has officially abandoned its talk of impeaching Mattarella.

And as of late evening in Italy, the head of 5 Star, Luigi Di Maio, broached the idea of reviving the coalition with Lega and prevent the need to hold new elections.

Even though this excerpt comes from an article in Bruegel that was published by the Peterson Institute, one can read past the editorializing and hoist useful recaps, such as this summary of the major economic policies of 5 Star and Lega, and estimates of their fiscal impact:

M5S and League’s electoral promises are both centered on a more expansionary fiscal stance, although with major differences. M5S promised the introduction of a minimum guaranteed income—which appealed to voters in the economically suffering south. The League party promised a flat tax—which appealed to voters in the economically thriving north. Both parties advocated the repeal of a controversial pension reform introduced in 2011 by the government of former prime minister Mario Monti. The government contract between the two parties features all three promises. Moreover, both parties have committed to repeal an otherwise automatic hike in the value-added tax (VAT) planned in the 2018 budget.

How much would this largesse cost, and how might it be financed? Repealing the VAT hike would require €12.5 billion. As for the other promises, Carlo Cottarelli at the Osservatorio Conti Pubblici Italiani estimates that the League’s flat tax would cost around €50 billion, while M5S’ guaranteed income would cost about €17 billion. Scrapping the Monti government’s pension reform would add a further €8 billion. Counting in some of the minor promises, the total would reach a whopping €109-126 billion (6 to 7 percent of GDP).

Since Italy is running a primary fiscal surplus of roughly 1.5%, this would imply a primary deficit of 4.5% to 5.5% of GDP. While that is arguably just a good big fiscal shot in the arms for a depressed economy, Italy’s deficit in 2017 was 2.3% of GDP, so adding in as much as another 7% of GDP in spending takes it to a nearly 10% of GDP deficit. Those are hair on fire levels to neoliberals and financial markets types. If you take the MMT point of view, Italy is a long way from being inflation constrained, but Italy isn’t a currency issuer and investors would exact a high interest rate to fund this level of deficit spending.

Some additional things to keep in mind. From Thomas Fazi, on why the Eurozone has ground Italy down economically:

As insightfully argued by Fritz W. Scharpf, former director of the Max Planck Institute for the Study of Societies (MPIfG), the euro regime can be understood as a process of “enforced structural convergence,” aimed at imposing the northern export- and profit-led economic model (well represented by countries such as Germany and the Netherlands) upon the very different political economies of southern countries, such as Italy, which tend to be much more internal demand– and wage-driven. Scharpf notes that “the economic impact of the present euro regime is fundamentally asymmetric. It fits the structural preconditions and economic interests of northern economies, and it conflicts with the structural conditions of southern political economies—which it condemns to long periods of economic decline, stagnation, or low growth.”

And going from the strategic to the tactical, from roversi1968 in the Financial Times’ comment section:

1. The Five Stars movement had threaded very cautiously over immigration issues before the Italian elections last March – so much so that a lot of disappointed centre-left voters decided to trust them and moved consensus from the centre-left to the Five Star movement. The Lega Nord on the other hand campaigned for – and indeed proposed they would if they went to power –  enforce the deportation of as many as 500,000 immigrants.

2. Mr. Berlusconi is back in the game after a tribunal decreed his good conduct makes him fit for office again.

3. After the vote in March Mr. Renzi actively kept the Centre-Left away from a coalition with the Five Stars movement – which alienated a lots of their voters – who did not understand why they had given a vote to a Party who refused to go to power.

So now – in the centre-left – either:

A1. The Five Stars align themselves with the Lega during the new electorial campaign, and in joining the open xenophobia they reveal true colours that are unpalatable to former centre-left voters – who will go back to vote centre-left, or:

A2. The Five Stars movement keep their separate campaign, they keep the former Centre-left votes, and will do well – perhaps even better than the last time.

B1. The Lega Nord breaks the electorial alliance with Mr. Berlusconi who will likely lose votes to them, or

Either way B1 or B2 the right will stay the same or be weakened,

To me, it seems the decisive factor is what the Five Star movements will do. If they run with the Lega, the centre left will come back to win more relevant parliamentary numbers and become a more likely governmental party. Especially if the sideline Mr. Renzi completely.

If the Five Star keep their own campaign separate from the Lega, they will likely increase their majority and may be able to form a goverment on their own.

And readers who nurtured hopes that the Bank of Italy might run the printing press in Italy to make more euros for the government, or provide liquidity to Italian banks in defiance to the ECB should take note of these remarks quoted in the Financial Times, which are consistent with our comments as to where the central bank’s loyalties would lie:

The comments by the governor of the Bank of Italy, Ignazio Visco, were unusual for an institution that rarely ventures into politics….

“The rules of the game can be debated, even criticised; they can surely be improved,” Mr Visco said in an annual speech on the state of the Italian economic and financial system. “Yet we cannot disregard constitutional constraints: protecting savings, balancing the accounts and respecting the treaties.”

Finally, to Wolf’s post. While he has a point in arguing that Italian interest rates have simply renormalized with impressive speed, the counterargument is that the Italian government can’t afford even modestly higher interest rates. Mind you, I haven’t seen any serious analysis supporting that claim.

And let us remember, as Robert Waldmann pointed out at Angry Bear, in Investors Not Pleased With Italian Politicians:

This isn’t a crisis yet. I recall back when Italia caught a bit of Greek contagion (before ECB president Mario Draghi said “whatever it takes”) that the experts at the tesoro said they could handle interest rate spreads up to 7% (it got close back then)

Markets wail and gnash their teeth as “normalization” of Italian yields sets in.

On Tuesday, Italian bonds had their worst day in Eurozone existence, even worse than any day during the worst periods of the 2011 debt crisis. And this comes after they’d already gotten crushed on Monday, and after they’d gotten crushed last week. And this happened even as the ECB is carrying on its QE program, including the purchase of Italian government bonds; and even as it pursues its negative-interest-rate policy (NIRP). As bond prices plunge, yields spike by definition, and the spike in the two-year yield was spectacular, going from 0.3% on Monday morning to 2.73% on Tuesday end of day: 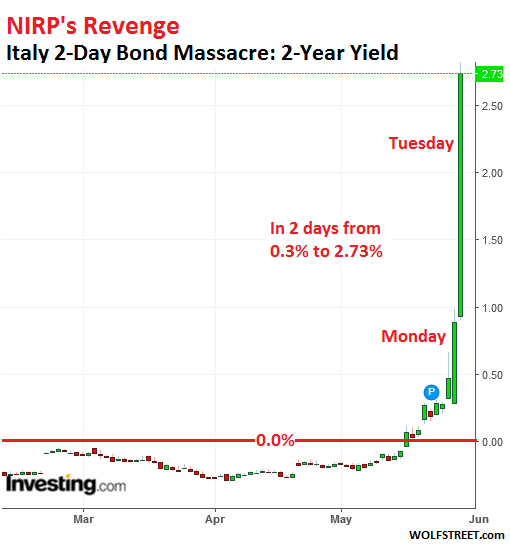 To this day, it remains inexplicable why the ECB decided that Italian yields with maturities of two years or less should be negative – that investors, or rather pension beneficiaries, etc., who own these misbegotten bonds, would need to paythe Italian government, one of the most indebted in the world, for the privilege of lending it money. But that scheme came totally unhinged just now.

The 10-year Italian government bond yield preformed a similar if not quite as spectacular a feat. Over Monday and Tuesday, it went from 2.37% to 3.18%: 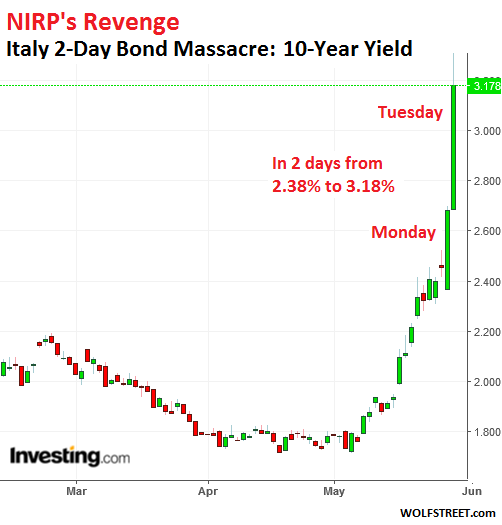 But here’s the thing: Italian bonds – no matter what maturity – should never ever have traded with a negative yield. Their yields should always have been higher than US yields, given that the Italian government is in even worse financial shape than the US government. Italy’s debt-to-GDP ratio is 131%, and more importantly, it doesn’t even control its own currency and cannot on its own slough off a debt crisis by converting it into a classic currency crisis, which is how Argentina is dealing with its government spending. The central bank of Argentina recently jacked up its 30-day policy rate to 40% to keep the peso from collapsing further.

That’s the neighborhood where Italy would be if it had its own currency. But the ECB’s QE shenanigans and NIRP drove even Italian yields below zero, and so now here is NIRP’s revenge.

But just a little. In fact, Italian yields are in the process of “normalizing,” but they’re doing it swiftly, rather than “gradually,” as the Fed likes to emphasize at every opportunity for a very good reason: It took the Fed over four yearsto push up the two-year Treasury yield by 210 basis points. Italy accomplished the same feat in less than two days.

OK, normalization can be painful after years of NIRP. But just today – on the worst day for Italian bonds in Eurozone history – the government was able to sell €5.5 billion ($6.4 billion) six-month bills maturing in November 2018, at an average yield of 1.21%.

Let that 1.21% stew for a moment. In the US, today, the 6-month yield closed at 2.06%! So the Italian government is still borrowing at a lesser cost than the US government. Italy’s yield normalization has a long ways to go!

This was up from a negative yield of -0.42% at the prior six-month auction at the end of April. Oh my, how it hurts to have to pay interest on borrowed money, rather than getting paid for borrowing. I can hear the wailing and gnashing of teeth in Rome and in the markets around the world.

This six-month yield had reached an all-time high of 8.65% in November of 2011 and an all-time idiotic low of -0.48% in November last year. It needs to be way higher than it is today to account for at least some of the risks.

This yield normalization – or bloodbath, as others call it – comes on the heels of the failure of two anti-establishment parties, one on the left, the other on the right, to form a coalition government. They’d proposed to just blow off €250 billion of Italian bonds that the ECB has stupidly acquired, introduce an alternate currency, cut taxes, and raise spending.

If this plan had come to fruition, government bond yields would have spiked into the double digits, and a real default with big haircuts for investors would have been all but certain at those yields. Now the plan is off, the coalition hopes are in shambles, new elections are likely, and Italian voters get to sort this out, once again in their manner, in the voting booth.

The “doom loop” begins to exact its pound of flesh. Read… Which Banks Are Most Exposed to Italy’s Sovereign Debt? (Other than the Horribly Exposed Italian Banks)