Yves here. This post includes a very helpful timeline of trade tit for tat so far. There are also four diagrams that show trade flow impacts of various proposed tariff measures. You might want to go to the Bruegel post proper and view them there because they are interactive and I could not pull an interactive version over.

By Francesco Chiacchio, Research Assistant at Bruegel. He was a trainee at the European Central Bank, working on projects related to productivity, Global Value Chains and technology diffusion, export intensity, and credit allocation, as well as on macroeconomic projections. Originally published at Bruegel

The multilateral trading system has been challenged by unilateralist measures and subsequent threats of retaliation. We collect the main events that have shaped the current situation and show which trade flows have been and will potentially be affected by the various measures. We end by discussing possible scenarios moving forward for the EU.

Since the beginning of the year, the multilateral trading system has been challenged with a number of decisions and announcements on tariffs. The trade conflict between the United States and China may be escalating, while the European Union finds itself in a precarious position in responding to the US’ challenges.

So what has and what has not yet happened this year? We focus on the measures taken and announcements made by China, the EU and the US in terms of trade policy. Here is the timeline:

The result of those is the looming prospect of continuous trade restrictions and retaliation measures involving a variety of products. Apart from steel and aluminium, the US targeted over 1,300 imported Chinese products worth around $50 billion, possibly aiming at China’s high-tech and industrial sectors.

China announced discontinuation tariff concessions for 128 products and a longer list of its own (also worth approx. $50 billion), focusing more on lower-end products, while the EU has a two-part list of products imported from the US that it could target if the US moves forward with steel and aluminium tariffs (worth approx. $7.5 billion, of which $3.2 billion from Part A, and $4.3 billion from Part B), targeting very “American” goods from specific regions.

Here is a table on which trade flows are mainly affected. The affected numbers are in red.

Source: USITC, Eurostat, Comtrade.
Note: Product categories selected up to the 8-digit code where possible, otherwise the 6-digit aggregate is used. Product lists retrieved from the Office of the U.S. Trade Representative (USTR), China’s Ministry of Commerce (MOFCOM), and DG Trade. Data for 2017, except for US exports to China of products affected by China’s proposed retaliation list (2016 data).

The four charts below depict the network of international trade flows between China, the EU, and the US for different categories of goods (steel and aluminium targeted by US tariffs, the US list of products, China’s long list of products, and the EU’s total list of products). The thickness of the bilateral linkages is proportional to trade value, and highlighted are those (potentially) affected by the announced/implemented tariff schemes. 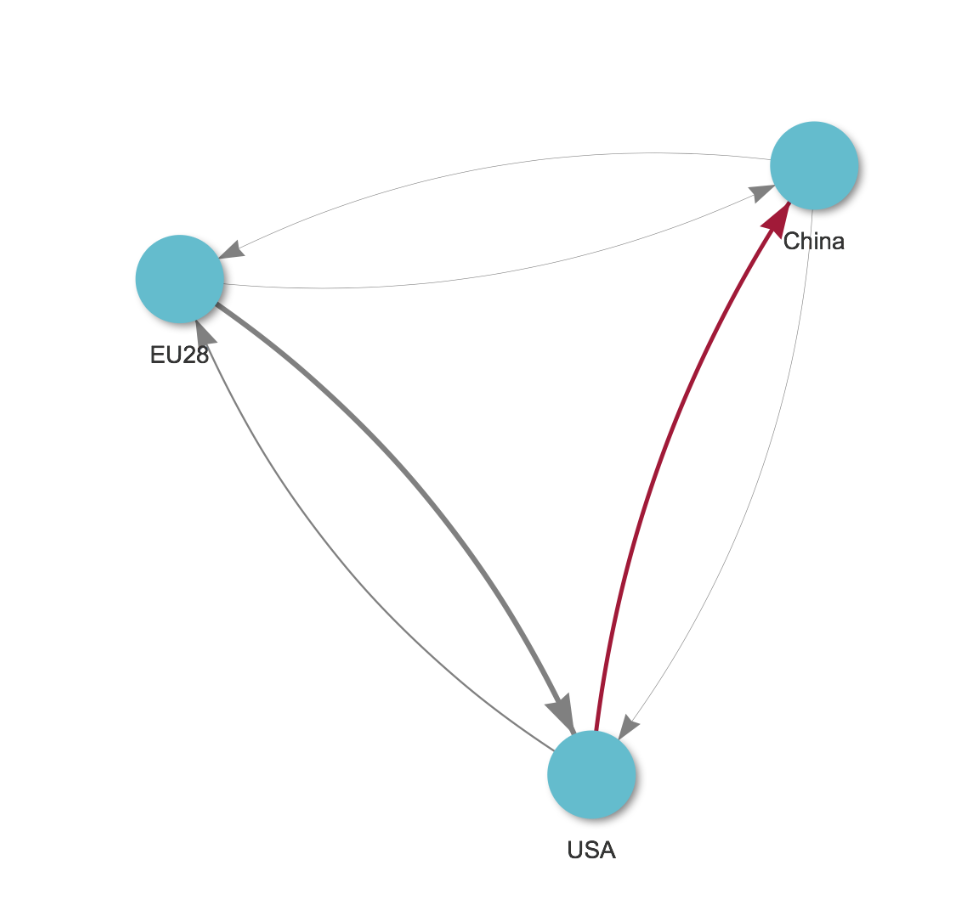 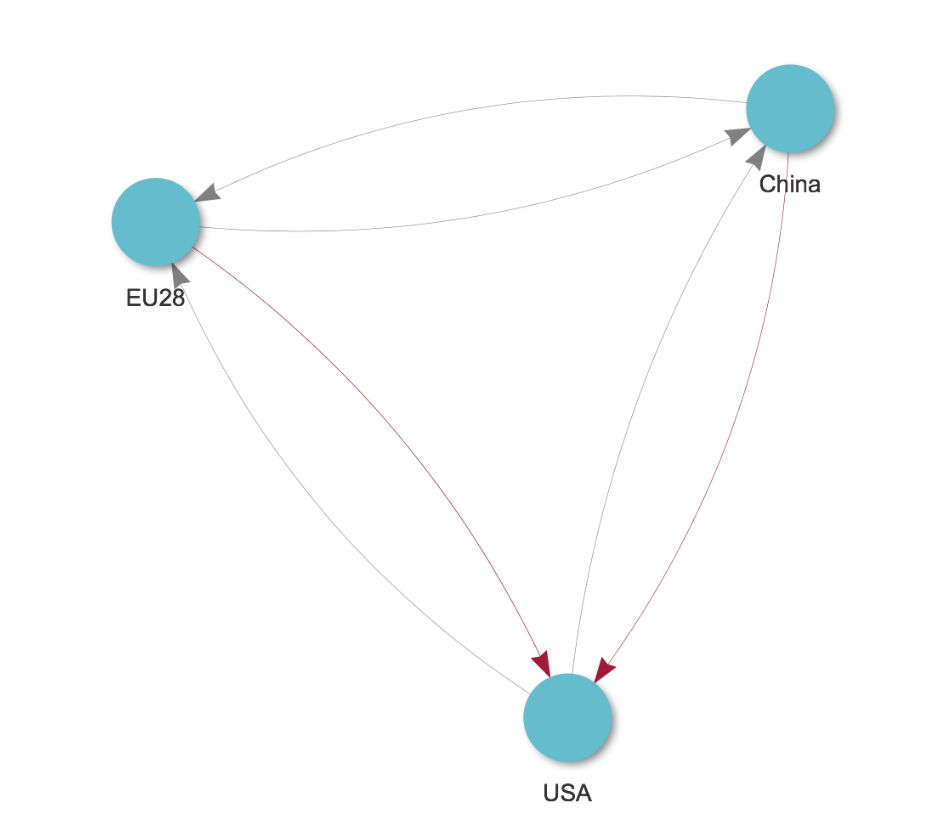 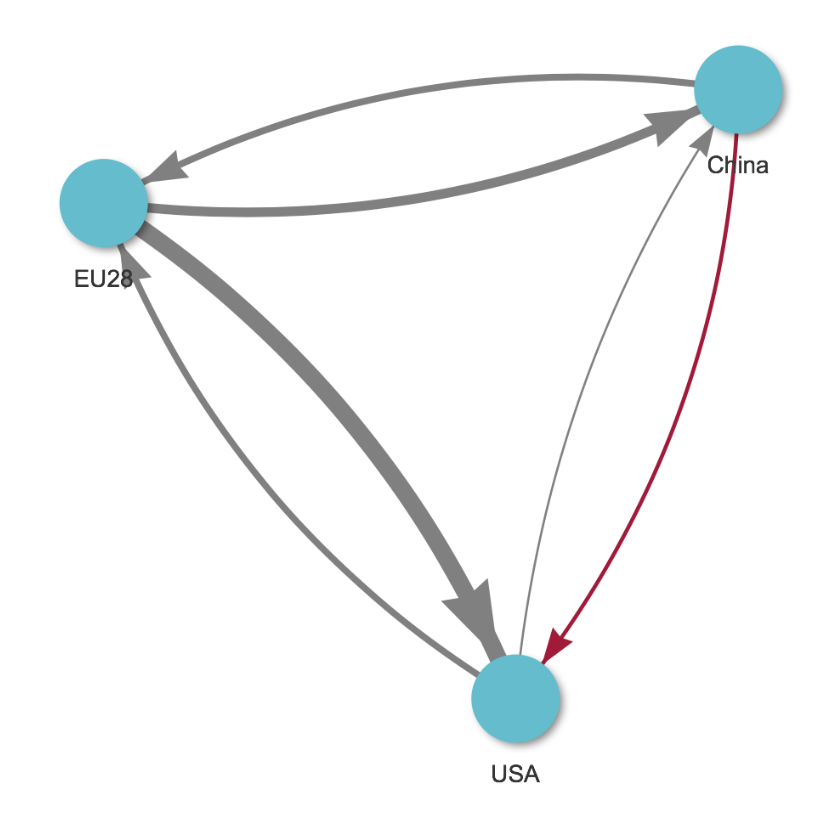 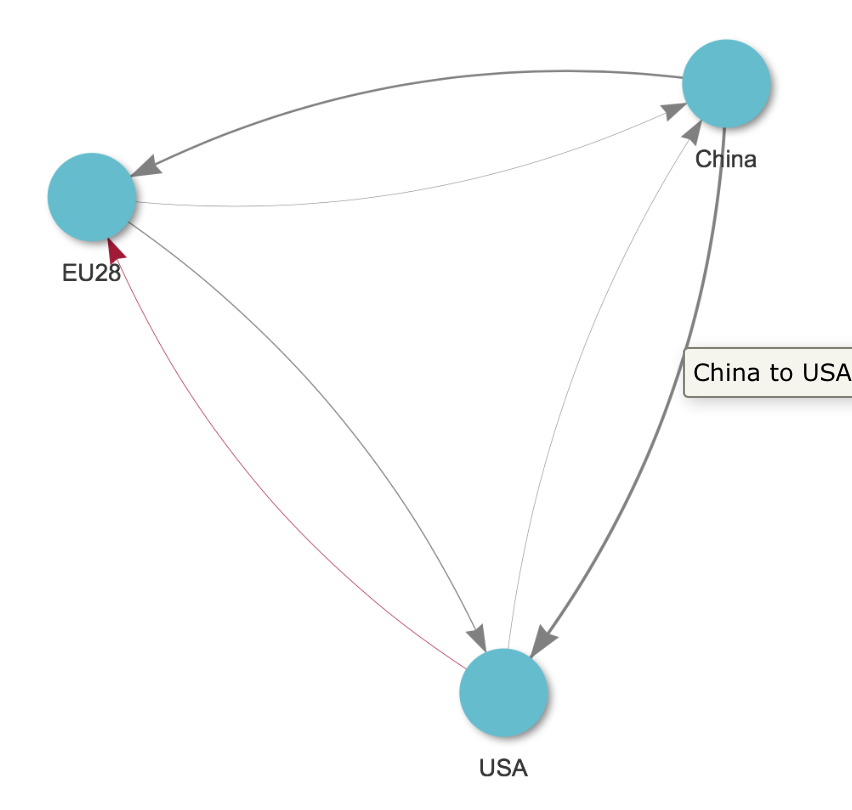 The charts show how much is being exported of each of the goods that would be affected by tariffs. Imagine for a moment that a good is perfectly substitutable.

In the event of a full-fledged China-US trade war, trade diversion constitutes a risk to the EU, as the redirection of flows towards the EU may cause an impairment of the position of local industries. Furthermore, greater protectionism may also induce higher production costs and a slowdown of Global Value Chain participation (through the channel of intermediate goods), possibly affecting technology diffusion and productivity growth. However, such a crisis might also bring opportunities for EU industries if there is production and innovation capacity to cover the void left by tariff schemes. Thus, one of the key questions is to what extent the goods affected by bilateral tariffs are substitutable and can somehow be shifted around to other destinations.

In practice, the raising of bilateral tariffs will likely create substantial distortions for the global economy that would also affect the EU, bringing some opportunities but also creating costs for industries. However, a deal between the US and the EU could also have negative consequences for the EU as new trade could be created and the EU would potentially lose access, at least in relative terms. It is time for the EU to reflect on its options in global trade, and to reduce the vulnerability of its industries to the global challenge that Trump and China pose.