By Steven Parfitt, a University and College Union member and Teaching Fellow at Loughborough University, and has written extensively on British and American social history, including a recent book, Knights Across the Atlantic: The Knights of Labor in Britain and Ireland, published with Liverpool University Press. He has also written for Jacobin, Labor Notes, OpenDemocracy UK, TheConversation.com and In These Times. Originally published at OpenDemocracy 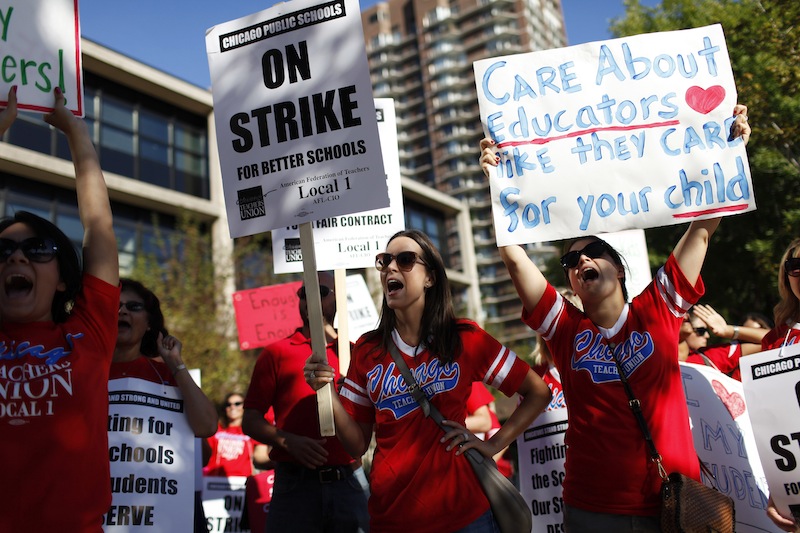 Teachers with the Chicago Teachers Union picket outside of the Walt Disney Magnet School in Chicago, Illinois, on Monday, September 10, 2012. Credit:Flickr/TMT photos. CC BY 2.0.

In the US, a teachers’ strike is spreading from one red state to another. It began in West Virginia when 34,000 teachers walked out on February 22 2018. They stayed out until March 7, against the advice of their own union leaders, until they received a deal that they could live with from the state government. They were soon joined by tens of thousands of teachers in Oklahoma, who struck from April 2 to April 12, and then their colleagues in Arizona followed them on April 26.

Now there are rumbles of teachers’ strikes in the blue and purple states of Illinois and New Jersey, and in states elsewhere. NBC News reports a “Red-state Teacher Rebellion.” There is no telling whether the rebellion will spread to more states and occupations.

The teachers’ strikes come at a difficult time for American unions. Their total membership has fallenfrom 17.7 million people in 1983 to 14.8 million in 2017, and the proportion of union members in the workforce has fallen even more dramatically, from 20.1 percent in 1983 to 10.7 percent in 2017. Unions continue to fund the Democratic Party, but their investment has seen few legislative gains. This is a story of failure, softened only by the occasional victory.

Yet the teachers’ strikes may offer American unions a road back to health. Historians have long known that unions seldom grow at a slow, steady pace. They tend instead to push forward in a series of leaps, in a kind of chain reaction where a strike in one industry inspires strikes in others. The growth of unions in one part of the country leads to the growth of unions in other parts, and to use the British historian Eric Hobsbawm’sterm, the labor movement recruits “in lumps” as striking workers join unions en masse. The American labor activist Kim Moody, in his recent book On New Terrain,describes this process as a “labor upsurge.” Could the strike by teachers in West Virginia be the spark for just such an upsurge in 2018?

To answer this question it’s useful to look back to previous waves of strikes in the US like the rising of 1934, when striking workers laid the groundwork for the Congress of Industrial Organizations,or the mass strikes in coal, steel, the railroads and other industries during or immediately after the First World War, or the militancy of auto and other workers in the 1970s.

We could also look to more recent strikes in 2012by the Chicago Teachers’ Union, the near-ousting in 2016 of President James P. Hoffa of the powerful Teamsters Union by the Teamsters for a Democratic Union(a rank-and-file movement), and the victories of Fight for $15in the last two years. But I would go even further backto understand what an upsurge could mean for today’s American labor movement, to the ‘Great Upheaval’ of 1885/87. What happened then?

American workers in the 1880s lived, as we do today, in the aftermath of a global financial crisis: in their case, the ‘Panic’ of 1873. The ensuing depression wiped out many American unions. As today, the survivors faced a highly unequal society and a political system beholden to big money. In this historical picture, the infamous financier Jay Gouldsubstitutes for the Koch Brothersand Andrew Carnegiestands in for Bill Gates.

Wages stagnated in nominal terms, at least for the rest of the 1870s and into the 1880s. Immigrants faced widespread discrimination, and Chinese immigrants were even excluded from the United States altogether from 1882 onwards. Black Americans endured the end of Reconstruction and the imposition of Jim Crow. American women faced exclusion from much public space and, when they worked for a wage, they faced a gender pay gap larger than that of today. Grievance piled on grievance.

However, union organizing started to expand again at the start of the 1880s, when economic conditions improved. A working-class movement, the Knights of Labor, rose from 10,000 to 70,000 members between 1878 and 1884. Telegraph operators, glass workers and railroad workers waged bitter strikes, sometimes successfully, and the final spark was lit in 1885 by workers on the Wabash railroad and the Southwestern rail system. Both railroads were owned by Gould.

In strikes during March and August, railroad workers twice forced him to reinstate strikers, grant overtime pay, reverse wage reductions, and tolerate their representatives, the Knights of Labor. Few strikes had ever succeeded against such a powerful adversary, and their victory over Gould gave workers in other places and industries the confidence necessary to down tools themselves. The Great Upheaval had begun.

This is the stage that some commentators think we’ve also reached today: on the cusp of a strike wave, this time sparked by the teachers of West Virginia. In the 1880s version of a labor upsurge, the strikes on Gould’s railroads opened the floodgates to industrial action. In 1886, 499,489 American workers engaged in 1,411 recorded strikes at 9,891 establishments. This was more than double the number of strikers in 1885 and far higher than the 129,521 strikers recorded in 1881.

Membership in the Knights of Labor rose to nearly a million in 1886, including tens of thousands of black and women workers. In the same year, the movement for the eight-hour working day pushed forward the cycle of strikes, boycotts, and protests. It reached its height in May 1886, when tens of thousands of workers across the country struck simultaneously for eight hours.

Workers pressed their case at the ballot box as well as in the workplace. Local labor parties sprang up to contest elections at local, state and federal levels. The radical economist Henry Georgeran for the mayoralty of New York on the United Labor Party ticket in 1886. He came a respectable second to the Democrat, Abram Hewitt, and beat the Republican candidate into third place—one Theodore Roosevelt.

Across the United States, workers elected labor mayors, state legislators and even congressmen in Washington DC. The two-party system briefly faced challenges that have seldom been seen since. In this strange time, Eleanor Marx, the daughter of Karl Marx, and her husband Edward Aveling could arguethat “the example of the American working men will be followed before long on the European side of the Atlantic. An English or, if you will, a British Labour Party will be formed, foe alike to Liberal and Conservative.”

We are certainly not at that stage yet. The campaign of Bernie Sandersin 2016, which saw a self-proclaimed socialist come agonizingly close to the Democratic Party presidential nomination, may have given new strength to the American left. A widely-cited Harvard University poll in 2016 may have found that most younger Americans now prefer socialism—whatever they think it means—to capitalism. But an electorally successful labor party is not likely to emerge in the next few years. If it does, it will take more time and require enormous energy on the part of the left, forces within the unions, and a wide cross-section of American workers.

Yet we should not discount the possibility of a labor upsurge in the meantime. The grievances that are leading teachers to strike in state after state are shared by millions of public and private workers across the country. Like teachers, these workers have less and less to lose by industrial action, and falling unemployment means that finding replacements for them becomes more difficult. International events might further fan the flames that the teachers have set alight. Strikes by Amazon workers in Spain, for example, could spread to the great logistics clustersof the United States and set off a chain reaction across the American heartland—much as the railroad workers did in 1885.

There is, of course, a cautionary side to this tale. The Great Upheaval of 1885-87 ended in defeat for the unions and for the new labor parties. When railroad workers struck again in 1886, after Gould reneged on his promises, they lost. In May 1886, anarchists at Chicago’s Haymarket Square were accused of throwing a bomb at police. The events that followed set off America’s first ‘Red Scare,’ and the labor movement became one of its main victims. The Knights of Labor shed hundreds of thousands of members. The labor parties soon disappeared or were absorbed into the Democrats and Republicans. The labor upsurge of 1885/86 became the headlong retreat of 1886/87. Historians now see the Great Upheaval of 1885-7 as a great step forward, followed by an even greater step back.

There are things we can all do to ensure that the rebellion of 2018 does not end in the same way. You can join the strike wave. You can show your face and your solidarity at the nearest picket line, or the nearest pro-strike protest. You can donate to strike funds, tweet support, sign petitions, and get involved in any movement that supports the strikers and tries to unite the different strikes under the same banner of political change. Each time you do these things, it becomes more likely that future historians will refer to the Great Rebellion of 2018 as a landmark in the renewal of American unions, and not as another episode in their long-term decline.