After so many cases arguing that gig economy workers should be deemed employees rather than independent contractors have failed, yesterday’s decision by the California Supreme Court, in Dynamex Operations W. v. Super, was a welcome and seemingly overdue restoration of common sense. This ruling implements the same rules that Massachusetts has adopted. That means not only is it significant by mere virtue of the size of the California economy, but it may be embraced by other states wrestling with this issue.

An overview from the New York Times:

The decision could eventually require companies like Uber, many of which are based in California, to follow minimum-wage and overtime laws and to pay workers’ compensation and unemployment insurance and payroll taxes, potentially upending their business models.

Industry executives have estimated that classifying drivers and other gig workers as employees tends to cost 20 to 30 percent more than classifying them as contractors. It also brings benefits that can offset these costs, though, like the ability to control schedules and the manner of work.

As we described very briefly yesterday, the ruling puts the burden of proof on companies to show that their relationship with a worker satisfies all of the three prongs of this “ABC” test for them to be deemed to be an independent contractor. Bloomberg Law provides this chart and summary: 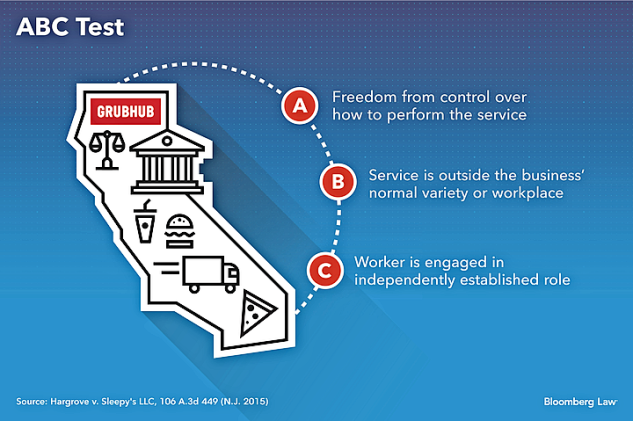 The three factors are whether (A) the worker has freedom from control over how to perform the service, (B) the service is outside the business’s normal variety or workplace, and (C) the worker is engaged in an independently established role.

And from the Times:

By way of an example, the court said a plumber hired by a store to fix a bathroom leak would not reasonably be considered an employee of that store. But seamstresses sewing at home using materials provided by a clothing manufacturer would probably be considered employees.

In addition, a company must show that it does not control and direct the worker, and that the worker is truly an independent business operator, not just classified that way unilaterally.

Since employment law is not one of our regular beats, let us turn over the mike to reader anon, who provided more detail in comments. I had raised the issue as to whether this decision could also help workers hired through temp agencies who in fact wind up tasked to what sure looks like a regular job but without the benefits, stability, and dignity. His take:

I am not a lawyer and wouldn’t even call myself an expert, but I have some knowledge in this area.

The court adopted Massachusetts’ version of the ABC test for differentiating employees from independent contractors. The ABC test, and the Massachusetts version specifically, is the strictest/most pro-worker test for this purpose. The test requires that a worker, in order to be considered an independent contractor, must meet all of the following requirements (this is a summary, not an exact quote):

(A) free from control in the performance of the services

This factor is part of most tests for differentiating employees from contractors, including California’s old Borello standard and the IRS’s common-law employee test. The problem is that it can be a really gray area with operations like Uber and leads to a lot of argument in litigation; my view is that Uber and similar operations fail this prong, but Uber’s lawyers use flexible scheduling, the lack of human supervision, the employee’s ownership and choice of vehicle, and other factors like that to argue otherwise.

This is also a part of most other tests (often phrased as “is the work integral to the employer’s business”). It basically means “is the employer in the business of performing the same type of work?” For example, driving is performed in the usual course of business for a taxi service like Uber, so Uber easily and unambiguously fails this prong. (Uber tries to argue, unsuccessfully so far, that they are a technology company producing an app that connects people looking for rides to oh-so-independent drivers.)

This just means “did the worker independently establish this business, or did their ‘business’ consist of filling out a job application on the company’s website and suddenly becoming an ‘independent businessperson’.” Besides the date of creation of the “business,” the court will look to other factors to determine whether an independent business really exists: Do they advertise their services? Do they have a website describing their business? Do they have multiple clients, or have they attempted to obtain other clients? Have they made some kind of genuine capital investment in the business (a personal car is unlikely to be persuasive)? Do they have employees or have they shown an intent to hire employees? “Gig economy” workers fail all of these. These are not hardline factors; for example, a worker who drives for both Uber and Lyft is more likely to be seen as analogous to an employee who works part-time for both Walmart and Target, than an independent businessperson with multiple clients.

This is a nightmare for the “gig economy” because, while they can argue all day about control, they unambiguously fail prongs B and C — and they must pass all prongs in order to classify a worker as a contractor. Also, the unfavorable Grubhub ruling from a few months back, now on appeal to the 9th Circuit, will definitely be overturned based on this new standard.

We’ve embedded the decision below. Wired discusses what this decision might mean for gig economy companies in more detail:

The big question is whether gig economy companies can stay afloat if they hire all their workers as full-fledged employees. Payroll taxes and other expenses associated with converting contractors to employees could increase an employer’s costs by about 25 to 40 percent per worker says Andrei Hagiu, a visiting associate professor at the MIT Sloan School of Management.

Gig economy companies already face difficult economics. Uber lost $1.1 billion in the fourth quarter of 2017, according to the Wall Street Journal. Some companies that tried to convert workers from contractors to employees have already folded or changed their business models, including on-demand shipping company Shyp, food-delivery company Sprig, and caregiving company HomeHero. “They’re operating on very thin margins,” Hagiu says. “I don’t think they can afford it.”….

Stanford business school professor Jeffrey Pfeffer argues that the model of many gig economy companies was not sustainable. “When those without workers’ compensation get injured, society pays,” he tells WIRED. “This is cost transfer from the wealthy (companies) to the (comparatively) poor workers. Holding aside any particular court decision, this was and is completely unsustainable in the long run.”

New York University Stern School of Business professor Arun Sundararajan says the gig economy will survive, but prices will be higher, at least in California, and push companies to adopt more automation. “It doesn’t threaten the long-term viability of businesses as a whole, but I think it will shrink their market in the short term because it will decrease sales,” Sundararajan says.

We will confess to having our priors on Uber, but it is hard to take Sundararajan as being up to speed on Uber in light of what he’s quoted as saying next:

Sundararajan says newer, smaller companies will have a much harder time than well-funded companies like Uber and Lyft, which will be better able to absorb costs and have established large labor forces.

Now it may be true that Uber can hang on longer than some younger companies regardless, but the idea that Uber is “well funded” is a widespread misperception. At its current burn rate, Uber is out of money in a bit over two years, and panic and abandonment of the ship will likely set in sooner than that. Our Hubert Horan deems an IPO to be a pipe dream, given SEC disclosure requirements (Uber has gone to extraordinary lengths to make it impossible for investor to track financial results over time) as well as the lack of any prospect that the company can be profitable, save at a very small fraction of its current size.

In addition, Uber does not have a “large, well-established labor force”. Driver churn is high and getting worse. One account claimed only 4% lasted for more than a year. Uber’s own admissions to the press aren’t much better. They say 30% churns every quarter. Pull out your calculator. That means only 24% are left after a year.

And the plural of anecdote is not data, but this is from an Uber driver as of the beginning of April who was working with about 45 other drivers via Twitter to get more accurate information:

Since XChange leasing ended Uber doubled the sign up bonus. Otherwise no specific intel in my area. On the forum it seems new drivers are actually burning out even faster than in the past, like the whole process is accelerating, instead of 6-8 weeks, more like 3-4 weeks to burnout.

So if anything, Uber’s driver turnover is getting worse.

Shorter: this couldn’t happen to a nicer bunch.