Readers, here is the latest iteration of my “Table 1” for the 2018 primaries. Perhaps, some day, there may even be a Table 2! This iteration is more to build a foundation for future iterations as the primaries heat up; nevertheless, there are some interesting results. This is what I did for structure:

1) I added a column for the primary dates.

2) I added a column for the previous iteration’s horserace ratings, so I can track changes in the tilts, leans, and likelies. (As before, the data is the latest from Inside Elections).

3) I also did more work on the Likely Rs, but it’s not ready to show yet.

1) I rechecked all the backers: DCCC, Emily’s List, Our Revolution, Justice Democrats, Brand New Congress, and Indivisible. There were very few additions from Our Revolution, who seem to back mostly state and local canidates; very few from Emily’s List, who focus on early money, anyhow; and none from Indivisible, who although they have an endorsement process, have made very few endorsements to date). DCCC, however, was quite active.

2) I rechecked all the horserace ratings (see Figure 2, below).

I did not rework the Challengers column, which means I am behind the curve especially in volatile states like Pennsylvania, but now that I have the primary dates, I can do more “just in time” data entry; it really is too much to check every single challenger every time I put this table together.

So, herewith, the table. After the table, I’ll present some results.

As you can see, primaries in IL and TX have already passed (although the TX-07 run-off between Moser and Fletcher will happen on May 22). Anyhow, now that I have this Calendar, I can make Water Cooler coverage a bit more tied to current events. And those of you who contribute to candidates may find this useful for planning.

If indeed there is to be a “wave,” it will show up in the districts. We should expect to see signs of it as Tilt-R districts change to Toss-Ups, Toss-Ups change to Tilt-Ds, and so on. (I grant that the methodology is what it is; I’m summarizing the handicappers. Presumably, however, the handicappers are looking at the polls. I’m including the SQL not to show off, but because it’s so much fun to ask the data a question and get an answer!)

So, MN-07 changed from Lean-D to Likely-D. That is the wave so far.

Of course, 189 days is a long time in politics, and maybe the real effects don’t kick in until after the primaries. I don’t see why that should be so, however; if party enthusiasm is the key factor behind a wave, it should be showing up before any candidates are chosen. Certainly that’s what people — people on the Twitter, and so forth — say is happening, right now.

Figure 3: Medicare for All and the DCCC (Candidates) 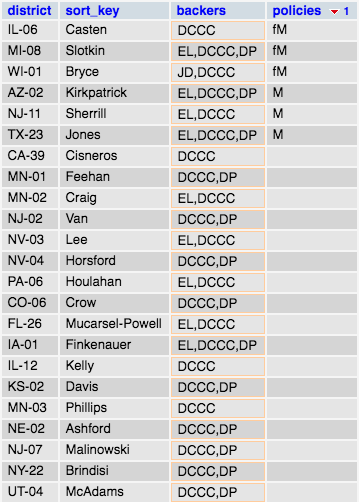 You can see that of 23 candidates backed by the DCCC[1], three (13%) support #MedicareForAll. I keep saying that the top priority for liberal Democrats this cycle is preventing #MedicareForAll, and numbers like this provide ample backing for that thesis. You can also see the fallback position: faux Medicare for All, under such vague rubrics as “universal access,” etc.

Figure 4: Medicare for All and the DCCC (Districts) 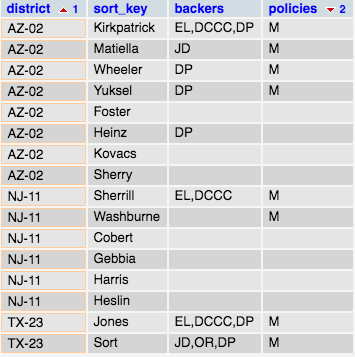 I wondered what accounted for DCCC-supported candidates who did the right thing; it looks to me that when faced with challenges from the left on #MedicareForAll, they do indeed move left themselves (though of course the bait-and-switch alternatives provide ample scope for betrayal at a later date.

Hopefully, readers find this series of reaonably deep dives useful; suggestions for future topics to look into are welcome. (Spoiler: I’m coming round to the notion that the real wedge issue for the Democrat Party is the nature of the Party itself. As Lampedusa did not say: “If we want things to change, things will have to change.” I know this is meta, but so be it.)

[1] The only list of DCCC-backed candidates I can find on the DCCC site is from their flagship “Red to Blue” program. Doubtless there are more.