Yves here. Yet another example of a planning/zoning problem.

The rain started to fall in Ellicott City, Maryland on the afternoon of May 27. Nearby tributaries of the Patapsco River were already dangerously swollen from last month’s steady precipitation. The storm intensified, and floodwaters soon tore through Ellicott City’s main street, submerging the first floors of buildings, sweeping away cars, and killing at least one person.

The storm was a so-called “1,000 year flood,” meaning it had a 0.1 percent chance of occurring this year. But this “exceptionally rare” event is deja vu for residents — they’re still picking up the pieces from a similar flood that destroyed the area back in July 2016.

After that big flood, Robin Holliday spent months rebuilding her business, HorseSpirit Arts Gallery. She didn’t expect a flood like that to happen again, but she also didn’t think the proposed watershed management plan was strong enough. Discouraged, she started to think about leaving. The recent flood solidified her decision.

So what’s behind the propensity for floods in Ellicott City? Part of the problem is its vulnerable location: the town lies at the foot of a hill where river branches meet the Patapsco River. And, of course, climate change makes storms wetter and increases the frequency of severe, record-breaking weather. But there’s another thing people are pointing out: concrete.

When hard, impermeable concrete replaces absorbent green spaces, it’s much easier for floodwaters to overwhelm stormwater drainage. “That’s what happened in Ellicott City,” says Marccus Hendricks, an assistant professor at the University of Maryland School of Architecture, Planning, and Preservation. 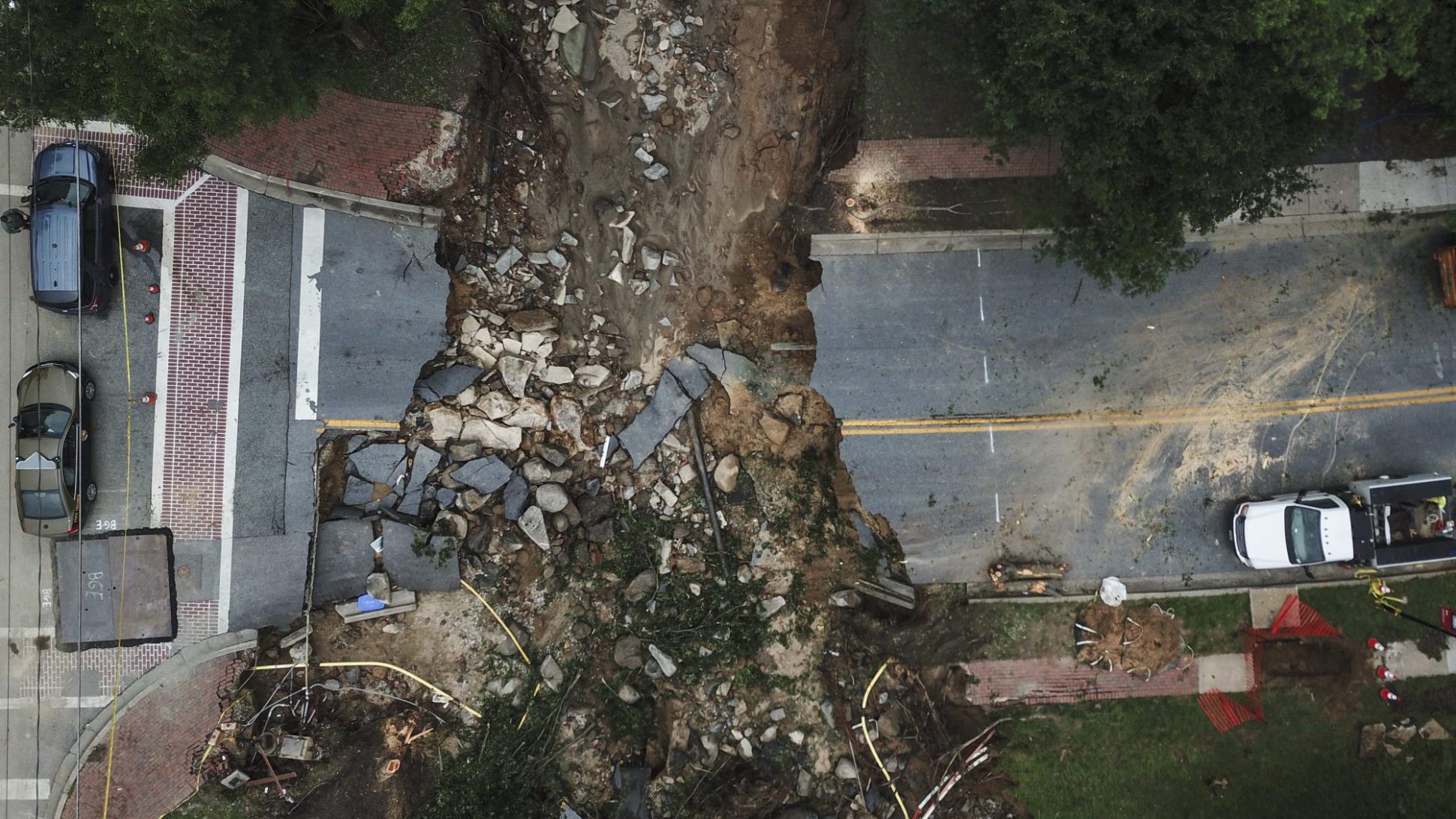 In Ellicott City, development has flourished.

“Nearly one-third of the Tiber-Hudson sub-watershed that feeds into historic Ellicott City is now covered by roads, rooftops, sidewalks and other hard surfaces that don’t absorb water,” the Baltimore Sun wrote in 2016.

In a press release, the Sierra Club’s Maryland Chapter called for a stop to development in the Tiber-Hudson watershed: “We may not have control over severe weather events (except by fighting climate change), [but] we can take ownership over the role that development played in this disaster.”

At a recent press conference, a local county official said that Howard County, home to Ellicott City, has been taking steps to prepare for more floods.

“We’re focusing on making sure that what has been approved is being done by the code and by law, making sure that stormwater regulations are being abided by,” said Allan Kittleman, the Howard County executive. Since the flood in 2016, he said the county has designed and engineered more stormwater retention facilities, but larger projects will take time.

This is far from the first time that development and asphalt have had a violent run-in with climate change. Last summer, Hurricane Harvey drenched sprawling Houston with trillions of gallons of water and caused $125 billion in damage. The area saw a 25 percent increase in paved surfacesbetween 1996 and 2011, according to Texas A&M professor Samuel Brody. Brody found that every square meter of Houston’s pavement cost about $4,000 more in flood damage.

And, rapidly developing or not, our cities are full of these paved surfaces. In the majority of the country, surfaces like pavement or brick make up just 1 percent of the land. Yet in cities, hardscapes account for upwards of 40 percent of land area.

“Every week, there’s some urbanized area that floods. We look up and say, ‘Oh that’s never happened before and it’s never going to happen again.’ But if you look at the big picture, it’s happening all the time with increasing severity.”