When the poorest gain, the lower bound, or ‘floor’, of the distribution of living standards rises. Using microdata spanning the last 30 years, this column argues that the floor in the US has been sinking, alongside rising top incomes. The floor would have fallen further without public spending on food stamps, which helped protect the poorest in the wake of the 2008 financial crisis.

As is well known, the US is experiencing a marked rise in top incomes (e.g. Piketty and Saez 2017), with relative stagnation of middle household incomes. But what is happening at the other extreme of the distribution? Are America’s poorest families seeing some progress? That is the question this column tries to answer.

Some terminology first. “Top incomes” refers to the incomes of the richest 1%. We refer to the lower bound of the distribution of levels of living as “the floor”. This can be thought of as the level of income below which very few people are likely to be found for any reasonable length of time. This can be above (hopefully well above) the biological floor needed for survival.

If rising top incomes are ‘trickling down’ to the poorest, then we should see the floor rise over time. To see if this is happening, in this column we draw on our research using survey data to measure the floor for the US annually spanning 1988-2016. (Our research has also studied the same topic for the developing world; here we focus solely on the US.)

Standard measures of poverty may reveal nothing about whether the poorest of the poor are being lifted up or left behind (Ravallion 2016). Existing poverty measures (including those that give higher weight to poorer people) can readily fall without any change in the floor or even a decline. Instead, we need to measure the floor directly, side-by-side with the prevailing ‘counting approach’ to measuring poverty.

There are a number of methodological issues in measuring the floor, as discussed in Ravallion (2016) and Ravallion et al. (2018). Most importantly, survey-based incomes are likely to be deceptive. We must recognise the existence of measurement errors in survey data. There are also likely to be transient effects in those data, whereby observed incomes (or consumption expenditures) for the recall periods in surveys can fall temporarily below the floor (for example, due to seasonality, a spell of illness or some other shock), but recover later. Thus, one cannot be certain that the lowest observed income in a survey reveals the floor. Indeed, there is a non-negligible chance that the observed income of potentially anyone within some low-income stratum could in fact be at the current level of the floor. Some form of averaging is necessary.

We follow the approach of Ravallion (2016) in measuring the floor asa weighted mean of the incomes of a stratum of low incomes, above which the floor is very unlikely to be found. For this column, we assume that the relevant stratum is those officially designated as poor in the US, with highest weight on the lowest observed income, and a linearly declining weight as incomes rise up to some point, above which there is no chance of being the poorest. Ravallion et al. (2018) gives results for other measurement assumptions, including: (1) allowing the probability of being the poorest to decline non-linearly as income rises; and (2) using a fixed percentile – the poorest 20% – rather than a fixed real poverty line. The main qualitative results are robust to these options.

In measuring the floor, we use the microdata from the annual Current Population Surveys (CPS) done by the US Census Bureau. We have calculated incomes from the CPS the same way the Census Bureau calculates its official poverty measures. This includes money income before taxes from multiple sources, but excludes some non-cash benefits. Importantly in this context, it excludes a major form of in-kind assistance targeted to poor people, namely, the Supplemental Nutrition Assistance Program(SNAP), often called ‘food stamps’. This is the US’s largest antipoverty programme, covering about 14% of the population. SNAP aims to help poor recipients cover their food spending. We provide estimates of the floor without SNAP, but also when SNAP receipts are added to reported incomes.

Figure 1 gives our estimates of the floor before and after SNAP. Since the official poverty thresholds vary by family size and composition, it is simpler to express the floor as a proportion of the threshold. The mean post-SNAP floor is about 36% of the official threshold. For a family of four, with two adults and two children, the threshold was about $16.50 per person per day in 2015. The floor in that year’s prices is $5.89 a day post-SNAP, while the pre-SNAP value is $5.40. 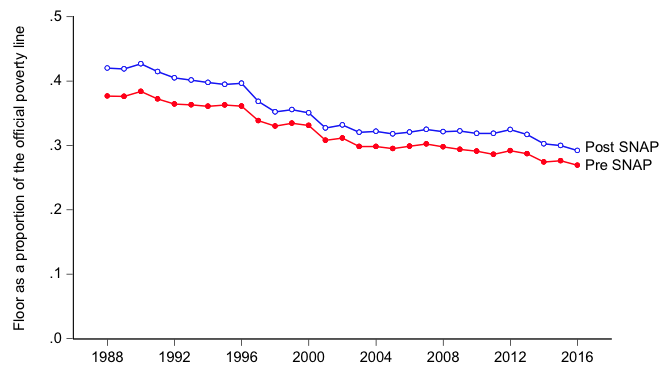 We see that the floor has tended to fall over time. The trend rate of change in the post-SNAP floor is -1.3% per annum. About half of the overall decline in the level of the floor is in the period 1996-2001, coinciding with various social policy reforms (Ravallion et al. 2018). The floor stabilised over 2003-12. There is no significant trend in the post-SNAP floor after 2003, though the fall in the pre-SNAP floor continued, albeit at a slower pace (Figure 1). However, the last few years indicate a worrying resumption in the floor’s downward path even post-SNAP.

Figure 2 Poverty measures for the US

Divergence Between the Richest and the Poorest

Figure 3 plots the per capita pre-tax incomes of various quantiles, including the top 1% – the income level above which one finds 1% of America’s population. Call this q(99). The figure also gives the quantiles for 95% and 90% as well as the mean and median (q(50)). We see a marked absolutedivergence – roughly speaking, a rising absolute gap between richest and poorest. Figure 4 uses logs instead. While the growth rate of the floor over the period is -1.3% per annum, the growth rate of q(99) is 1.6% per annum.  For a family of four, the floor fell from about 9% of q(99) in 1988 to 4% in 2016. So there is also marked relativedivergence. Figure 4 Relative divergence between top incomes and the floor 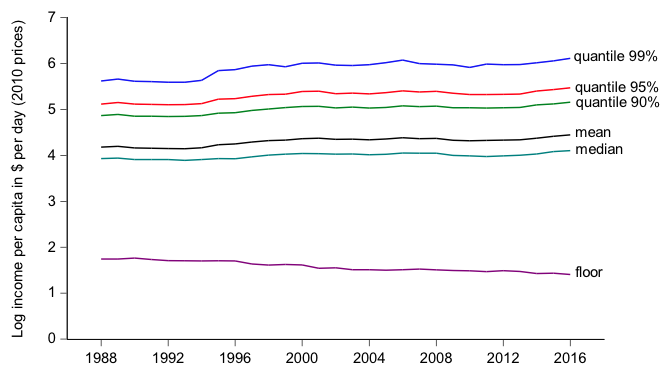 Source: Based on estimates in the same source as Figure 3.

A caveat here is that there is likely to be a downward bias in survey-based estimates of the incomes of the rich. For example, the estimates combining the CPS with income tax and national accounts data in the Worldwide Inequality Databaseindicate a higher growth rate for the top 1% than found using the CPS alone. If anything, the true extent of the divergence is even greater than we see in Figures 3 and 4.

We see in Figure 1 that foods stamps lifted the floor. Over the whole period, SNAP raised the floor by about 50 cents per person per day, on average. The programme also helped stabilise the floor. Our results suggest that without the ‘SNAP stimulus’, the floor would have fallen even further in the wake of the 2008 financial crisis. Less encouragingly, we also find that the efficiency of SNAP in reaching the poorest (the gain in the floor per dollar spent on the programme) has declined over time (Ravallion et al. 2018). However, it is clear that SNAP has helped America’s poorest.

Is this a form of ‘trickle down’, via public spending on antipoverty programmes? SNAP spending per recipient has grown alongside rising top incomes, though whether the latter caused the former is an open question. More tellingly, SNAP participation rates have fluctuated over time, buffeted by politics and reform efforts, and this has been the main driver of fluctuating SNAP spending per capita of the US population, with the expected implications for the living standards of the poorest (Ravallion et al. 2018). Politics and policies have probably played a more important role than a trickle-down process through social spending.