The rise in the market power of large firms is assumed to affect economic activity, but measuring either market power or its effects is challenging. Based on firm-level data for 74 countries, this column shows that market power has increased around the world, driven mostly by ‘superstar’ firms. Higher markups are initially associated with increasing investment and innovation, but the reverse is true when market power becomes too strong. The share of income paid to workers also declines with rising market power.

The large number of corporate giants in industries from the airline industry to pharmaceuticals to high-tech companies raises questions about the effects of market power. Some argue that it reduces economic dynamism and exacerbates income inequality. Others argue that higher profits and economies of scale and scope associated with it spur investment and innovation.

The lack of consensus over the extent and effect of market power is partly because it is difficult to measure it. A standard definition of market power is the ability of a firm to maintain prices above marginal cost, which is the price level that would prevail under perfect competition. Yet we don’t have data on prices and marginal costs for large numbers of firms over time.

Our recent research (Díez et al. 2018)estimates these markups using data from income statements and balance sheets for publicly listed companies in 74 countries between 1980 and 2016. Using Thomson Reuters Worldscope,1 we are able to estimate markups for 33 advanced economies and 41 emerging market and developing economies based on firm-level data. Our firm-level approach, which partly builds on work for US firms by De Loecker and Eeckhout (2017), provides more granular insights into market power than conventional Herfindahl-Hirschman-type industry concentration ratios.

The results suggest that markups among advanced economy companies have significantly increased since the 1980s, by 43% on average, and that this trend has accelerated since 2010 (Figure 1). By contrast, among emerging market and developing economy firms, the rise of markups is a much more moderate 5%, on average, since 1990. These results are broadly consistent with new work by De Loecker and Eeckhout (2018) for 134 countries. 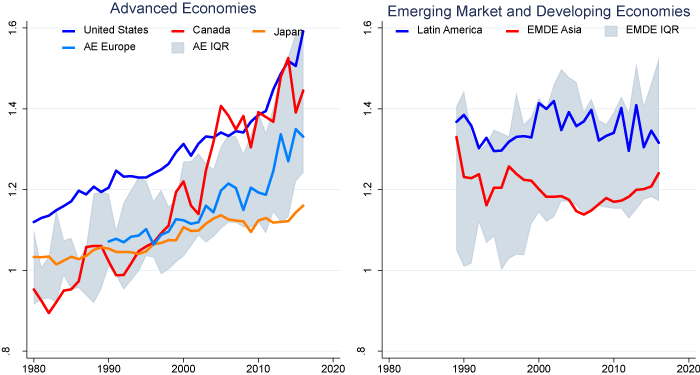 The increase in markups in advanced economies is mostly driven by ‘superstar’ firms that managed to extract high markups, while markups in other firms have essentially been flat. The distribution of markups has broadened and skewed upward (Figure 2). Interestingly, all broad economic sectors show this pattern. 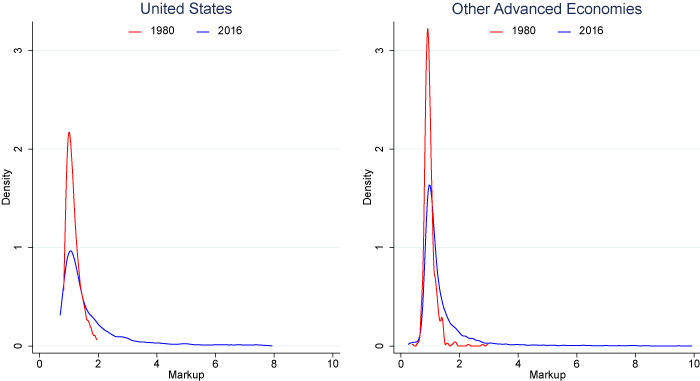 Source: Authors’ calculations based on data from Thomson Reuters Worldscope.

Should We Be Concerned?

The short answer is yes, especially if this this rise in corporate market power in advanced economies continues. We found that, starting from low levels, higher markups are initially associated with increasing investment (capital expenditure) and innovation (research and development), but this relationship becomes negative when market power becomes too strong (Figure 3). This estimated non-monotonic relation is highly robust. It is not driven by any country or industry. Further, the link between markups and investment and innovation is more strongly negative in industries featuring higher degrees of market concentration. 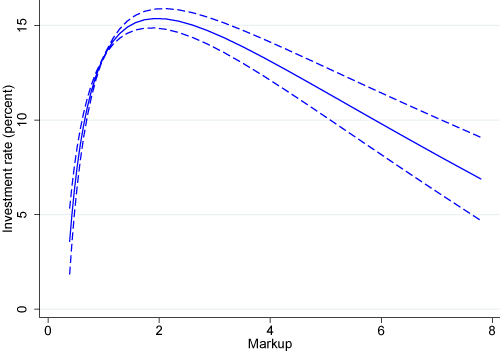 We also find a negative association between labour shares and markups, implying that the labour share of income declines, on average, in firms whose market power rises. In other words, when there is higher market power, the share of firms’ revenue going to workers decreases.

The policy implications of this depend on what has caused this increase in global market power. The factors are still debated. Possible causes include the rise of intangible assets such as software, network effects (when a product’s value to the user increases as the number of users of the product grows), or weaker anti-trust enforcement. More research is needed to discriminate between them.

Authors’ note: The views expressed in this column are the sole responsibility of the authors and should not be attributed to the International Monetary Fund, its Executive Board, or its management.