Earlier this week, American Banker reported that the Office of the Comptroller of the Currency launched a wide-ranging examination of 40 banks in the wake of the Wells Fargo fake accounts scandal. Recall that the reason that Congresscritters and the general public were so incensed was that in some cases the San Francisco bank was stealing, via taking money from customer deposits to pay fees on the fake accounts. In other cases, customers had their credit scores damaged as a result of the process.

The American Banker article makes clear that not only is the OCC refusing to say which banks are up to no good, let alone saying how much “no good” is happening, but it also appears that the OCC isn’t doing anything more serious than having chats with management over tea and cookies telling them they need to tidy these messes up.

I assume Elizabeth Warren has taken note and will subject the Comptroller of the Currency, Joseph Otting, who was formerly head of OneWest (eek!) to some pointed questions.

Let’s be clear: there’s no reason not to name names, save that the OCC has gone back to its bad form of being in the business of bank protection, as opposed to bank regulation. Obama appointee Tom Curry actually did combat some of the agency’s worst behaviors, and his most important action was forcing out its general counsel, Julie Williams, who was the worst sort of bank stooge.

The OCC doesn’t even deign to justify its silence, taking the view that the fact that this misconduct is confidential regulatory information means the agency can keep it hidden. Help me. Since when is it in the public’s interest to keep crooked conduct secret?

Even in the case of a full blown scandal that eventually resulted in the resignation of its CEO, no one ever thought that anything more than Wells Fargo’s stock price was at risk.

Even though these scandals deservedly hurt a bank’s image, lead some customers to quit and new prospects to be correctly wary of a dishonest institution, they are not about to precipitate a bank run. Customers and investors both deserve to know if a bank has been playing fast and loose with retail accounts, and if so, whether it is a relatively small scale problem (say reflecting some weakness in controls that some units gamed) or institution-wide fraud, as was the case with Wells.

The other reasons for exposing banks’ dirty laundry, aside from embarrassing managements that ought to be embarrassed, and maybe even getting their boards to ding their compensation, is that these frauds are seldom isolated. The Wells fake accounts scandal turned out to be the first of many: auto loan insurance, illegally overcharging servicemembers on their mortgages, improperly repossessing servicembers’ cars, and mortgage “rate lock” abuses.

From the American Bankers story:

The review uncovered specific examples of other banks opening accounts without proof of customers’ consent, an OCC spokesman acknowledged Tuesday. It also spurred the issuance of warnings on five specific industrywide issues that banks needed to address, and more than 250 specific items regulators wanted fixed at individual banks, according to a consultant briefed on the OCC’s findings.

Ahem, this looks like an awful lot of gambling has been uncovered in Casablanca. So could one of the reasons for the OCC’s reticence that they found so much wrong when they did a bit of digging that it would call their former lax light touch oversight into question? Or even worse, that exposure could kick off another Wells Fargo level round of Congressional and media uproar, which would make it very hard for the regulation-hostile Trump administration to do nothing? Recall in the Wells Fargo hearings, even diehard libertarian Jeb Hensarling was calling for Something To Be Done.

The article quotes Dan Ryan, who leads PwC’s banking practice, and claims banks are getting religion in the wake of the OCC’s findings. He would say that, wouldn’t he? An OCC spokesman also claimed that before the Wells scandal, hardly any banks looked at their sales practices across the institution, and the OCC review that started in 2016 prodded them to shape up.

Again from the story:

[OCC spokesman Bryan] Hubbard went on to say that when the OCC review found instances at specific banks of accounts being opened without proof of customer consent, the root causes varied. Among the most common factors were short-term sales promotions without adequate risk controls, deficient account opening and closing procedures, and isolated instances of employee misconduct, he said.

“When unauthorized account opening or other inappropriate sales practices occurred, banks have already taken — or are in process of taking — remedial action,” Hubbard said.

That meant-to-be reassuring picture is at odds with this:

Ryan of PwC offered further specifics about what the OCC found, saying that the agency issued a total of 252 Matters Requiring Attention notices to banks whose sales practices under review.

So-called MRAs focus on practices inside a bank that examiners deem to be deficient and lay out corrective actions that banks are expected to take to remedy the situation….

As part of the sales practice review, the OCC also issued five industrywide MRAs, according to Ryan. He declined to disclose what specific issues those missives involve.

252 matters at 40 banks means an average of over 6 per bank. And then five across the entire banking industry? And Joe Retail Customer is supposed to assume everything is hunky dory at his bank? Admittedly, some cases of bad conduct have come to light: 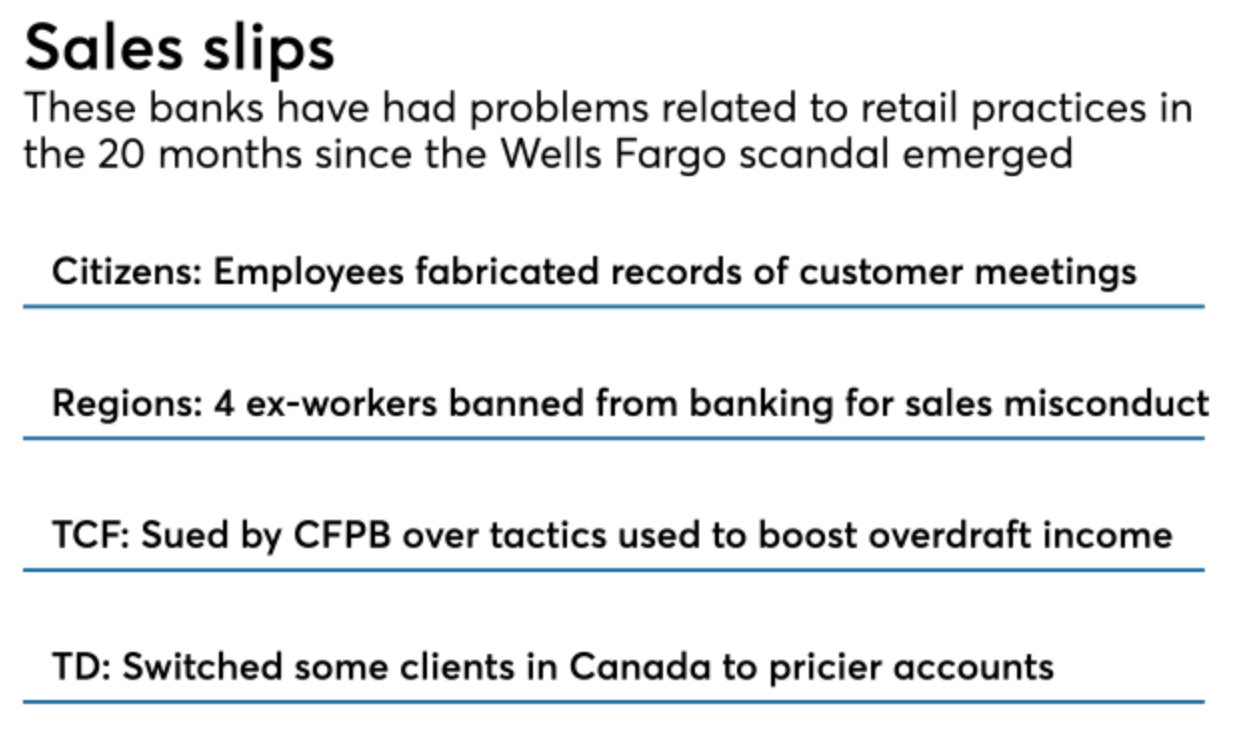 In its understated manner, American Banker made a pitch for the OCC to come clean:

But absent a report from the OCC, it is hard to assess what is happening in the banking industry as a whole. Though supervisory information about individual banks is confidential, Art Wilmarth, a law professor at George Washington University, argued that the OCC should release its general findings.

“This is a watchdog that’s not barking,” he said.

The problem is that banking customers don’t care enough about abuses like this until they become a victim, and then they find that it is pretty much impossible to prevail when a bank cheats. Even if the press were to give this OCC story some play, how many voters would call or drop an e-mail to their Congresscritter to tell them they were appalled that the OCC would run interference for banks after the Wells scandal? Banking regulators can count on complacency, which makes it even easier than it ought to be to play the revolving door game.