Over the course of  the last decade, the National Surveys on Energy and the Environment (NSEE) has surveyed Americans to determine if they believe there is solid evidence of global warming.

The most recent NSEE survey, conducted during April and May of 2018, found that 73% of Americans now think there is solid evidence of global warming– a level higher than the previous record of  72%, revealed  during the fall of 2008. This survey is the fifth straight survey in which at least 70% of Americans thought  there is evidence that temperatures on the planet are rising. 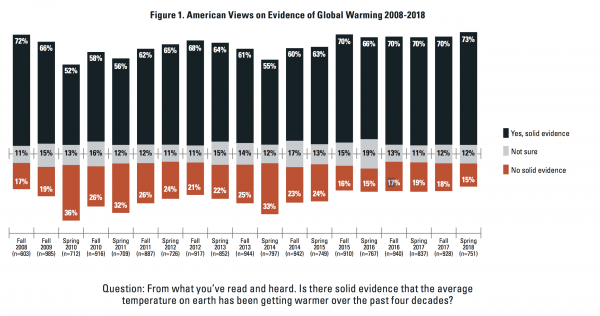 There is, however, a striking partisan divide among Democrats, Republicans, and independents on whether global warming is occurring. The most recent NSEE findings indicate this divide is large and modestly widening, with the gap between Democrats and Republicans as large as  40% : 90% of Democrats think there is solid evidence of global warming while 50% of Republicans maintain this same view.

So What? We All Know Public Policy Doesn’t Track Public Opinion

These results are good news– I think.

Now, readers may disagree– and despair at the significant minority of people who don’t think climate change is real, and that humans are causing it. To that I retort that at least the numbers are improving, albeit slightly, and this despite massive astroturfing campaigns mounted to the contrary by fossil fuel interests (for more on that score, see this recent DeSmogBlog post, Fake Grassroots Campaigns Deserve Uprooting).

Does this incremental shift in public matter?  I would hope so. We all know that there’s a huge disconnect between public opinion and public policy in the United States– due to the money-driven political system. What that means in this regard is that even with a solid proportion of people believing in  climate change caused by humans, those percentages alone won’t override the resources the fossil fuel industry can pour into maintaining the current disastrous system.

A couple of points.  First, the higher those numbers, and the more solid the support for beliefs, the more difficult it is for ALL politicians to ignore public opinion– particularly those political figures who are exploring alternative mechanisms for financing their campaigns that don’t involve auctioning off their principles to the highest bidder.

Second, even at the level of oligarchs and their minions, however much the fossil fuel industry wants to continue to Drill, Baby, Drill and Frack ’Til You Drop, everyone’s not on board with such a program. Some industries  will no doubt profit significantly from a shift away from a fossil fuel economy to a more sustainable system– and we would expect money from those industries devoted to measures to address climate change.

Overall, this means I’d expect some political money spent on a different vision that the Kochs no doubt abhor– but which might benefit all of us.

State Level Action: Some Cause for (Minor) Optimism?

At the moment, all’s not completely lost– the Trump administration’s dreadful environmental record notwithstanding (and a trend I should point out that can only be expected to worsen,  despite EPA administration Scott Pruitt’s recent resignation, as I wrote in Pruitt Resigns as EPA Chief: So What?).

States, such as California, continue to pursue saner policies.  And some of these policies put states on a collision course with the feds (as I wrote in Trump Regulators and California on Collision Course on Rolling Back Fuel Efficiency Standards).

I ‘ll note here that California last week reported some success in mitigating greenhouse gas pollution, according to this California Air Resource Board (CARB) press release:

The California Air Resources Board today announced that greenhouse gas pollution in California fell below 1990 levels for the first time since emissions peaked in 2004—an achievement roughly equal to taking 12 million cars off the road or saving 6 billion gallons of gasoline a year.

“California set the toughest emissions targets in the nation, tracked progress and delivered results,” said Governor Edmund G. Brown Jr. “The next step is for California to cut emissions below 1990 levels by 2030 – a heroic and very ambitious goal.”

“In California we see the impacts of climate change all around us, but our efforts to curb its worst impacts are on track. We are well positioned to meet the challenge of the 2030 target,” said CARB Chair Mary D. Nichols. “This is great news for the health of Californians, the state’s environment and its economy, even as we face the failure of our national leadership to address climate change.”

Senate Bill 32, signed in 2016, requires the state to go even further than AB 32 and cut emissions 40 percent below 1990 levels by 2030—the most ambitious carbon goal in North America.

I should also note that according CARB, the 13% drop in carbon pollution since 2004 was achieved over a period in which the state economy grew 24%– a fact suggesting that addressing climate change isn’t necessarily incompatible with economic growth. The state’s per capita emissions continue to be among the lowest in the country and fell 23 percent from a peak of 14 metric tons per person in 2001 to 10.8 metric tons per person in 2016– approximately half as much as the national average.

What Is To Be Done?

Obviously, the scale of the climate problem demands more than piecemeal attention, on a state-by-state basis. The modest recent developments I here rort may make many readers despair. But they suggest that first, the majority of the US public believes climate change is real, and that percentage is increasing. And second, that despite the situation at the federal level– with Trump in the White House and Congress held by Republicans– state level progress on at least reducing current emissions levels is possible. Unfortunately, much more drastic action is necessary.