The Trump administration is trying to replicate the Obama-era strategy of shutting in Iranian oil exports as a way to pressure the regime into making a series of concessions. But there are several reasons why Trump may not succeed.

It isn’t that Trump’s sanctions won’t be as effective, despite the refusal of the rest of the international coalition to go along with Washington’s isolation campaign. In fact, even though the EU, in particular, is hoping to shield Iran from the wrath of the U.S. Treasury, international companies are packing up and leaving Iran and refiners around the globe are starting to cut their oil imports from Iran. So, yes, there is every reason to believe that the sanctions will have real bite.

The main problem that could frustrate the Trump administration is the oil market, which is in a very different place than it was in 2012-2015. The oil market is tighter than it has been in years, which could ultimately force the U.S. to go easier on Iran than it would like.

A cursory glance at oil prices for the period in which the Obama administration pushed sanctions on Iran shows elevated prices, which would lead one into thinking that the Obama administration also had to contend with a tight oil market. Brent crude routinely topped $100 per barrel during a time in which Iran saw around 1 million barrels per day of exports disrupted.

Brent is now significantly lower than that, so Trump should have no problem cutting Iranian supply off once again, right? Not so fast.

President Obama had the fortune of an exploding U.S. shale sector. It probably wasn’t obvious to the Obama administration what was unfolding in North Dakota and Texas when sanctions on Iran really started to hurt in 2012. U.S. oil production skyrocketed between 2012 and 2014, rising by over 3 mb/d, which more than compensated for the 1 mb/d of lost Iranian supply.

To be sure, the Trump administration is also presiding over a shale boom. U.S. production is up about 1.6 mb/d since Trump took office, and output in 2018 has increased by around 400,000 bpd year-to-date. However, the problem for Trump is that Permian bottlenecks could mean that additional growth slows to a crawl, at least for the next year or so. That means that as the U.S. begins to cut into Iranian supply, U.S. shale drillers will not be able to compensate for the losses. 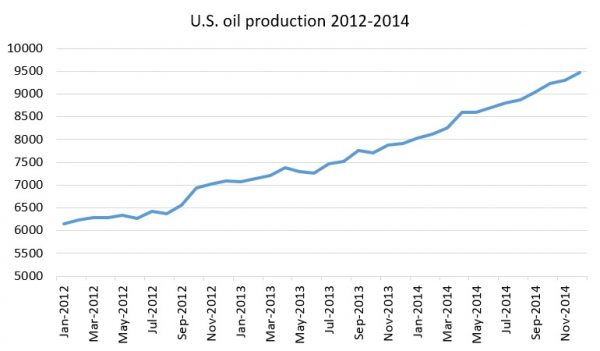 It isn’t just about U.S. supply versus Iranian supply though. The broader market is trending in a much tighter direction than it was back then, despite the difference in prices. Outages in Venezuela, Libya and Angola have tightened the market much faster than expected. More importantly, at least in the case of Venezuela, the losses are set to deepen.

Then, of course, there is the decline of inventories, which has picked up pace this year. OPEC+ has spent a year and a half trying to get inventories back to the five-year average, an objective that was achieved earlier this year. But now, because the current supply/demand balance reflects a deficit, inventories are set to continue to decline.

“The previous sanctions episode was only possible, in our view, because U.S. shale production was growing at a very fast clip and Libyan output came back to the market to replace some of the missing Iran barrels,” Bank of America Merrill Lynch wrote in a research note. “Plus, other OPEC members were still running with some spare capacity and global oil demand was rather sluggish. In contrast, we now project global oil supply and demand balances to remain in a structural deficit for most of the next six quarters.”

The upshot is that even though Obama slapped sanctions on Iran when oil prices were high, he had a series of tailwinds at his back that Trump will not enjoy. The oil market is tight and any effort to shut in Iranian supply will exacerbate the situation.

Moreover, the Obama administration took a careful and deliberate approach to sanctions, precisely because it wanted to avoid pushing up prices. U.S. politicians are always highly concerned about the political damage of high gasoline prices, which is a big reason why the Obama administration offered some pretty reasonable waivers to multiple countries that bought Iranian oil. The rule of thumb was that if a country cut imports from Iran by 20 percent, that was pretty good, and they received leniency from Washington on the rest.

The Trump administration instead has vowed some sort of “zero tolerance” policy, hoping to shut in as much Iranian supply as possible. The U.S. State Department said it would not be inclined to grant any waivers. Those comments alone sent oil prices shooting up in June.

But, the Trump administration might be forced into backing down if prices spike too high. Bank of America Merrill Lynch says that “a complete cutoff of Iran exports would be very hard to manage and likely result in an oil price spike above $120/bbl.”

John Kemp of Reuters summed it up earlier this month: “The White House can drive Iran’s oil exports to zero, or it can have moderate U.S. gasoline prices, but it probably cannot have both.”