In 2017, INSEAD published a study by Robert Ayres, an INSEAD Emeritus Professor of Economics and Political Science and Technology Management, and Michael Olenick, an Institute Executive Fellow which looked at all buybacks for US companies over the prior 20 years, discarding firms not in business when the study was done, not in business five years before, too small (<$100M market cap), or trading OTC. The study showed statistically that the higher the buyback ratio –the more firms engage in excessive buybacks – the less likely they are to grow in market cap.

Even though the study got some predictable pushback, an updated version of the analysis shows the findings still hold, that buybacks do not enhance shareholder value.

From the 2017 write-up at Knowledge at INSEAD:

When share repurchases increase debt and reduce spending on innovation and R&D it directly affects a firm’s long-term ability to survive and grow in a disruptive and uncertain business environment. Meanwhile, the question arises: What happens to the money that is “returned” to shareholders by share buybacks? Economic theorists suppose that this money will be re-invested in more promising opportunities. What seems certain is that much of the money will be ploughed into ever-riskier investments in the search for even higher returns. We suspect that much of the money spent on buybacks by established “mature” companies has created a stock market bubble in FAANG stocks (and others) where conventional PE ratios no longer restrain investors in search of growth.

To get a better understanding of the impact of buybacks, we set out to compare the performance of companies that rely heavily on repurchasing shares with those that do not. Our study, “Secular Stagnation”, examined 1,839 public companies in the United States over a five-year time‐scale. We found that the more money a firm spends on buybacks, the less likely it is to grow over the long-term. In fact, as the chart below makes clear, we discovered that not only do buybacks not lead to growth in a company’s market value, they are strongly correlated to a declining market value. 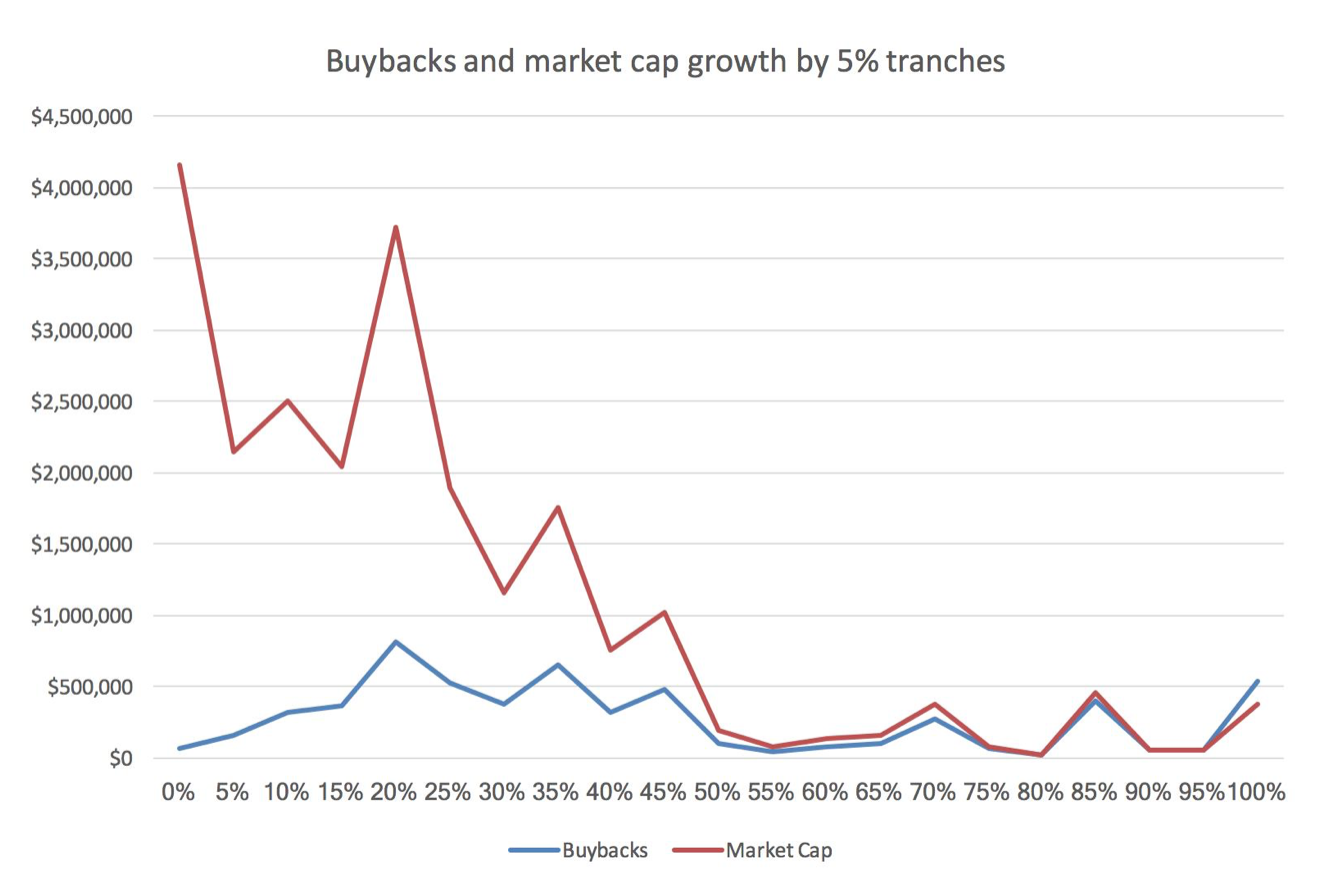 Corporate executives and directors are apparently bereft of ideas and the confidence to make long-term investments. Rather than using record profits, and record amounts of borrowed money, to invest in new plants and equipment, develop new products, improve service, lower prices or raise the wages and skills of their employees, they are “returning” that money to shareholders. Corporate America, in effect, has transformed itself into one giant leveraged buyout….

The best recent research on the folly of buybacks is by two professors at Europe’s top business school, INSEAD. Looking at the 60 percent of companies that have bought back their stock between 2010 and 2015, Robert Ayres and Michael Olenick calculated that the firms, as a group, spent more than 100 percent of their net profits on dividends and share repurchases. They also found that the more a company spent on buybacks, relatively speaking, the less good it did for the stock price….

Corporate buybacks don’t just affect individual companies, however. At this scale, buybacks are also a factor in the performance of the overall economy.

Consider that $1.2 trillion is the equivalent of more than 6 percent of the annual output — or gross domestic product — of the United States, the world’s largest economy. It is larger than the GDP of all but the 15 largest countries in the world. And it is a sum that will likely far exceed the amount of money raised by the corporate sector’s issuing new stock, meaning that for another year, more equity capital is flowing out of publicly traded corporations than flowing in….

The most significant and troubling aspect of this buyback boom, however, is that despite record corporate profits and cash flow, at least a third of the shares are being repurchased with borrowed money, bringing the corporate debt to an all-time high, not only in an absolute sense but also in relation to profits, assets and the overall size of the economy. 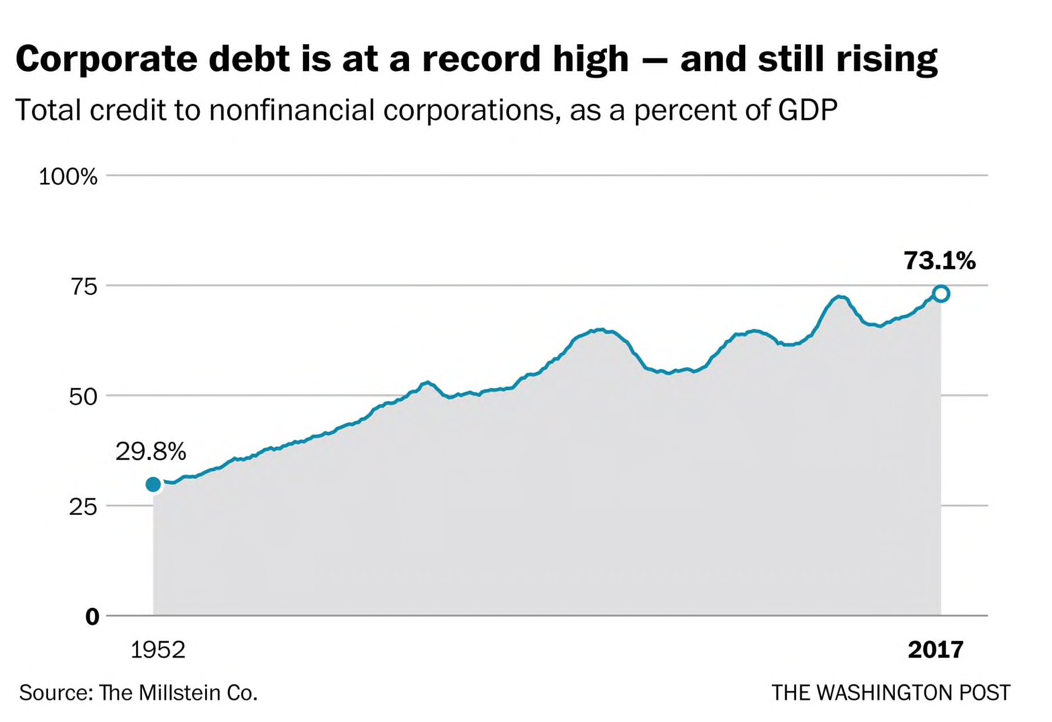 Now to the update.

In April, 2017, I pulled and analyzed stock buyback data, looking for a correlation between excessive buybacks and five-year market cap change.

I pulled a list of firms that had repurchased their own stock in the prior 20 years. Then excluded companies that were trading over the counter, were no longer trading (usually because they went private), were not public five years before the study, or that had a market cap less than $100 million. In other words, I was trying to compare menschkeit firms performance over a longish-term horizon. To eliminate bias by different legal frameworks, I limited my study to US firms.

Feeling like Edison, trying different lightbulb filaments, I kept querying the S&P Capital IQ database and finally had a list of 1,063 companies that matched the criteria. I adjusted the value of the buybacks for inflation then computed the ratio of buybacks to the then current market cap. Finally, I put them into 10% tranches based on the buyback ratio.

There was a statistical correlation: the more that a firm engaged in excessive buybacks – the higher their ratio – the overall worse their five-year market cap performance. The findings were widely published.

Buyback fans weren’t pleased. They argued I didn’t know what I was talking about. The figures are what they are: it’s just data. They asked why I care: I’m not a finance person. Guilty as charged: I focus on innovation. But if a firm is spending free capital on buybacks – and even borrowing money for buybacks – they’re not investing in innovation. Well, R&D spending is up, or at least flat, argued some. Funds spent on blue sky R&D invention, aimlessly poking around the lab, is still funded but that’s different than innovation.

In any event, the study blew over, Trump and his Republicans passed their mega tax-cut, and businesses predictably went on a stock repurchase binge. Even before that, the Trump Bump drove up stock prices. Maybe they were right; maybe I didn’t know what I was talking about, I thought, watching the market reach dizzying new heights.

A few weeks ago, the Washington Post wrote about the study. It’s been more than a year, and I wondered how well that list acted as a forward-predictor. On a hot night, in my French cottage, I realized it’d be easy enough to find out. With a glass of wine and my French bulldog as an assistant, I returned to S&P Capital IQ, pulling in the current stock price and market cap for those firms in the original study, and compared.

When Edison’s bulb turned on and didn’t burn out he realized he had a business (well, he still had to build electricity plants, fuses, meters, a power grid, and find customers but close enough for our purposes here). When I saw the results from the follow-up, I realized a low buyback ratio basket fund would’ve produced happy investors with trading fees more akin to index funds than hedge funds.

Before the big reveal, an important digression. Stock buyback enthusiasts argue that repurchases are a signal, by management, that they believe their stock is trading abnormally low, that it’s a good deal. The Securities & Exchange Commission commissioned a studyall but using the word bullshit. It showed that managers are more likely to sell their shares after a stock-price bump influenced by a buyback announcement. Obviously, if they’re selling their own stock then they don’t believe the shares are underpriced.

Except, in a small number of firms, this might be the case; some really were, in hindsight, good buys. Comtech Telecom (+130%), Myriad Genetics (+104%), Tailored Brands (+104%), Weight Watchers (+384%), and Crocs (+177%) are all standouts that had buyback to market cap ratios over 90%. That is, when I did my initial analysis, they had all repurchased at least 90-percent of what the market thought their firms were worth.

Weight Watchers. Crocks. I struggled, trying to find the correlation. Maybe it had something to do with the fall of Mario Batali?

Finally, I realized it didn’t matter because – except for the 90-100 percent tier (where both Weight Watchers and Crocs sat) my high ratio companies far underperformed my low ratio companies overall. Choosing the right tranche, except maybe the >100% one, is probably impossible except for stock picking savants … unicorns. Instead, investors would have been better simply avoiding the companies with ratios above 50% and buying companies under 20%. Here is the list, by tranche:

In essence, this proves – looking forward, using results previously published – that even in a bull market the original study was correct. There may be a small number of anomalies but, overall, excessive buybacks stink. Besides lower returns, they’re also harmful to employees, suppliers (who get squeezed), and the overall economy.

Buyback proponents cite Milton Friedman, and follow-up articles, that argue a firm’s sole responsibility is to shareholders and management should do nothing but increase share price by any legal means. These theories (and, no doubt, the revolving door to better post-government jobs) were what inspired regulators to legalize share buybacks in 1982.

Except that  Friedman was famously wrong in his seminal article that inspired everything else.  The responsibility of your firm, he told GM directors in 1970 – in a lengthy New York Times article – must ignore calls to build cars that are safer, cleaner, and have better fuel mileage. “Businessmen who talk this way are unwitting puppets of the intellectual forces that have been undermining the basis of a free society these past decades,” ranted Friedman, urging GM to Galt’s Gulch.

They listened and watched a long, slow, and painful decline as car buyers changed to companies offering safer, cleaner, more fuel-efficient automobiles. How’d shareholders do? The stock was flat or down for decades. The share price recovered, thanks largely to reckless lending in subprime mortgages, then imploded into bankruptcy. Great work, Milton.

Excluding firms with buyback ratios above 50% – firms that use buybacks responsibly – investors would have realized better returns. The S&P 500 was up 13.58% for that timeframe. My <10% tranche was up 21.4%. My high-ratio firms underperformed by so much that if I had funds and motivation I could’ve shorted the whole batch, putting stop-losses in for the gainers, and done well.