Yves here. Murphy is not exaggerating when he discusses how much wealth the rich hide. Gabriel Zucman, in this book The Hidden Wealth of Nations, conservatively estimated that tax evasion by households amounts to about 8% of global wealth.

The right-wing love to say inequality does not matter. They also love to say that the Gini coefficient that measures inequality is improving. They trumpet as a result that in their opinion all is right in the world because people are now getting no worse off.

But, as many familiar with such data know, it is not revealing of the truth. Inequality is seriously understated because its measurement is based on survey data and the wealthy don’t do surveys any more than they pay taxes. And the wealthy also hide their income and assets more effectively than do the rest of society precisely because they have so much of it that tucking it out of sight is much easier.

So, what really matters is whether or not most people can and do have enough income to have at least an adequate standard of living. The following comes from CommonSpace, the website linked to the Common Weal think tank in Scotland with whom I do some work. I borrow it because I think it summarises a new report from the Joseph rowntree Foundation rather well:

ARE things getting better? The Joseph Rowntree Foundation has published a report on minimum income standards from 2008-2018, and it shows that for those at the bottom and middle of the income pile seeking to have enough to live a decent life, the situation is no better than 10 years ago when the Great Recession began, and in many ways worse.

The report looks at what income is required for a person/family to have an acceptable minimum standard of living. We are talking about the basics here – having enough food, clothing, warmth and being able to access work and partake in cultural activity

CommonSpace has analysed the report and picked out some key points which show just how tough it is for an increasing number of people in the UK to live a decent life and why this is happening. 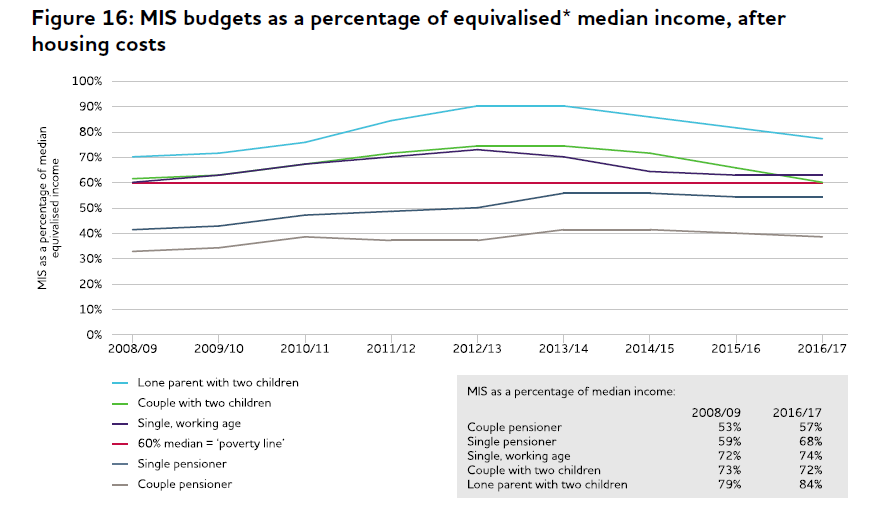 Minimum income standards (MIS) are harder to meet on a median income – the middle point of all incomes in the UK – than 10 years ago, for every group other than couples with two children, who are just marginally in a better position to have a a minimum acceptable standard of living than a decade prior.

For the bottom third of income earners who fall significantly below the median household income – £27,300 – the ability to have a minimum acceptable standard of living quickly becomes unachievable. The majority of households below MIS have someone in work, while the proportion of working households with disposable incomes below MIS has risen since 2008, from 18 per cent to 23 per cent. 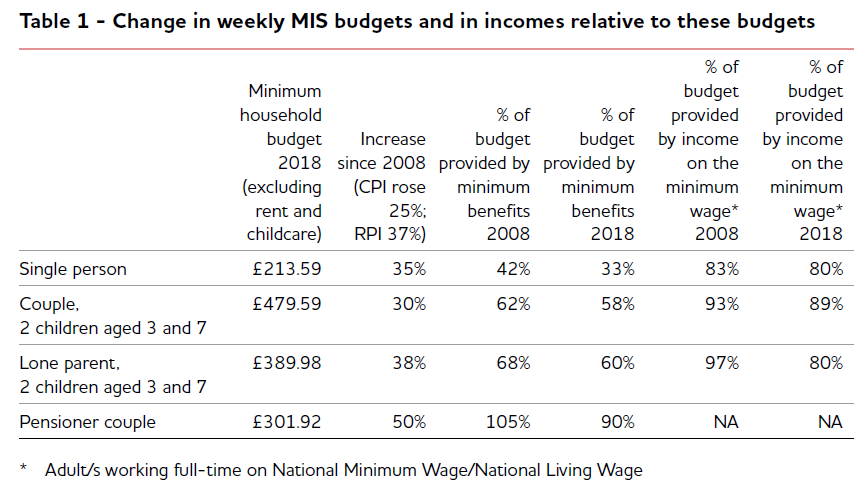 As the table above shows, life has got much harder for those on benefits in the past 10 years, with benefits providing just one-third of what is required for meeting the minimum income standard for a single person, and just 58 per cent for a couple with children and 60 per cent for a lone parent. The state pension previously provided enough to meet the MIS, but are now 10 per cent short of what is required. Austerity combined with rising living costs had its toll.

My point is a simple one: the right wing are wrong.

Markets are not making things better.

Austerity did not work.

People are worse off.

And this in the supposed sixth richest nation on earth.