Yves here. I am glad to see Gaius call out Verizon’s illegal and reprehensible conduct. More readers sent me links to this story than I can recall for any story in years.

Extortion is a fundamental part of Verizon’s business model. On a much less consequential matter, readers may recall that they ended my copper landline service. They also hit me with a final bill that every Verizon rep to whom I spoke said should have been a refund, and one even tried to get it fixed. Despite that plus letters objecting to the final bill, they sent it to collection. Our Clive told me better to capitulate than take the credit score hit, that even if I won the fight, the credit score damage would be lasting and difficult to remedy. When I complained in passing about the unjustified final bill, several readers said they’d had the same thing happen to them. 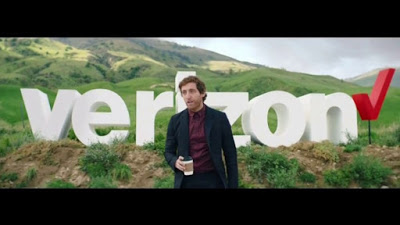 Thomas Middleditch, actor and star of the hit series Silicon Valley, taking “sellout money” (his phrase) and shilling for Verizon, the company most strongly associated with killing net neutrality

There’s no way to sugarcoat this. As one commenter noted, this is “pure evil.”

It looks like Verizon, already the greedy face of the death of net neutrality, throttled the data speed of California fire-fighting equipment during a 300-arce wildfire in an attempt to force them to upgrade to a more expensive data plan.

During a 300-acre wildfire.

Sounds like blackmail for money to me, with lives and homes held hostage. ArsTechnica tells the story. Since their focus in on the net neutrality angle, I’ll present what they present in a little different order (emphasis mine throughout).

“In the midst of our response to the Mendocino Complex Fire, County Fire discovered the data connection for OES 5262 [the county’s command-and-control vehicle for in-the-field firefighting] was being throttled by Verizon, and data rates had been reduced to 1/200, or less, than the previous speeds,” Bowden wrote. “These reduced speeds severely interfered with the OES 5262’s ability to function effectively. My Information Technology staff communicated directly with Verizon via email about the throttling, requesting it be immediately lifted for public safety purposes.”

Verizon did not immediately restore full speeds to the device, however.

“Verizon representatives confirmed the throttling, but rather than restoring us to an essential data transfer speed, they indicated that County Fire would have to switch to a new data plan at more than twice the cost, and they would only remove throttling after we contacted the Department that handles billing and switched to the new data plan,” Bowden wrote.

All “in the midst of our response to the Mendocino Complex Fire.”

This is not the first time Verizon has done this to the Santa Clara County Fire department, and the department anticipates it won’t be the last:

Verizon throttling also affected the department in a response to previous fires in December and June, emails show.

Bowden argued that Verizon is likely to keep taking advantage of emergencies in order to push public safety agencies onto more expensive plans.

“In light of our experience, County Fire believes it is likely that Verizon will continue to use the exigent nature of public safety emergencies and catastrophic events to coerce public agencies into higher-cost plans, ultimately paying significantly more for mission-critical service—even if that means risking harm to public safety during negotiations,” Bowden wrote.

In other words, this is part of the plan — disaster capitalism, county by county.

It’s difficult to use words like “psychopathic” to describe this behavior and still be taken seriously, but but it’s hard not to use it too. Among the characteristics of psychopathic behavior are these: “antisocial violence, a selfish world view that precludes the welfare of others, a lack of remorse or guilt, and blame externalization.”

Verizon’s “antisocial violence” is clear, as is their world view, which “precludes the welfare of others.” As for “blame externalization,” this was their initial response:

Verizon also noted that the fire department purchased a data service plan that is slowed down after a data usage threshold is reached. But Verizon said it “made a mistake” in communicating with the department about the terms of the plan.

“We made a mistake in how we communicated with our customer about the terms of its plan,” Verizon said. “Like all customers, fire departments choose service plans that are best for them. This customer purchased a government contract plan for a high-speed wireless data allotment at a set monthly cost. Under this plan, users get an unlimited amount of data but speeds are reduced when they exceed their allotment until the next billing cycle.”

In the meantime, here’s what their serial “mistakes” make worse:

The Mendocino Complex fires now are at 410,482 acres, having added about 4,000 acres to the total Tuesday night into Wednesday.

The newly burned acreage, part of the gargantuan Ranch fire, is an incremental increase to the combined totals of the Ranch and River fires. The two fires took off in late July and raced east into and across Lake County, threatening numerous towns and communities and burning at least 157 homes. One firefighter has been killed.

Cal Fire officials early Wednesday reported the added acreage came in the Ranch fire’s north and northeastern sections. Some of the growth came from backfiring operations by firefighters. More backfiring was slated for Wednesday if weather allowed.

Containment on the Ranch fire, which is at 361,562 acres, remained at 67 percent. Cal Fire officials still are looking at Sept. 1 for full containment.

By the way, human beings at Verizon did this; corporations are just buildings and paperwork. I don’t think a legal construct, acting alone and in secret, pulled those switches and shut down their data feeds. Policy start with a person saying yes.

As I said, it’s hard not to use “that word” for this behavior. Ask yourself how the law would react if a living person had acted in this way. Then ask what the newspapers would call him.

Now the net neutrality angle, which ArsTechnica featured up front in the story:

Bowden’s declaration was submitted in an addendum to a brief filed by 22 state attorneys general, the District of Columbia, Santa Clara County, Santa Clara County Central Fire Protection District, and the California Public Utilities Commission. The government agencies are seeking to overturn the recent repeal of net neutrality rules in a lawsuit they filed against the Federal Communications Commission in the US Court of Appeals for the District of Columbia Circuit.

Verizon did say something about whether the throttling had anything to do with net neutrality. They said it didn’t:

The death of net neutrality — which Verizon and its former council (and now FCC chair) Ajit Pai want desperately to bring about — is all about money, very large piles of it. And while this (that word) industry successfully killed net neutrality at the federal level, the issue is very much alive in California:

California lawmakers will be moving forward with tough provisions in a legislative proposal that could turn into one of the most ambitious net neutrality laws in the country. […]

“This will be the most comprehensive and the strongest net neutrality protection in the United States, where we are restoring what we lost when Donald Trump’s FCC obliterated net neutrality,” [state Sen. Scott] Wiener told reporters Thursday, referring to the Federal Communications Commission’s decision last year to repeal its national-level regulations for Internet service providers.

The California proposal goes further than the defunct federal rules. The revised bill will contain tougher language that not only bans Internet service providers from blocking and slowing websites, but, for example, it will also ban “abusive” forms of a practice known as zero-rating, the lawmakers said. Zero-rating occurs when an ISP exempts its own apps and services from customer data caps but counts other app usage against those monthly limits.

Which takes us back to Thomas Middleditch, the cool new Verizon spokesman. You probably love him if you like the cool series Silicon Valley. Verizon bought his services so his cool lovable persona would rub off on them, and he happily sold his services to them.

Interestingly, Middleditch called their case “sellout money” in this glowing interview with the New York Times:

Did you ever expect that playing [Richard on Silicon Valley] would also land you a Verizon endorsement deal?

Ten, 15 years ago, if you were on a successful TV show or in a movie, and you did a commercial, everyone would go, “Oh, his career’s over.” But now, it’s the opposite. Studios look at it and go, this major corporation put a ton of money behind this person — he must be marketable. You get your sellout money and a nod from studios.

I don’t for a minute think his is behavior could be characterized by … that word. He just sounds clueless. Dangerous, of course, given the rest of this story, but clueless in that Hollywood way.

Maybe someone should talk with him about his choices. Yes, the cash is good, but cash isn’t everything — unless you’re (that word) Verizon, who pays him to cover for their crimes. Which he does.