Yves here. This IPCC whitewash stands in stark contrast to a report included in Links today, summarized in the Independent, US to be hit worse than almost any other country by climate change, report says. Note also that the first IPCC reports, in 2007, also suffered from pressure to water it down, but then it was China that was particularly aggressive in wanting the findings toned down, since the position of developing nations has been that since the West burned a lot of carbon in order to develop, they have the right to do so too to enable their citizens to achieve a comparable standard of living. The wee problem is that the world can’t even begin to sustain its current population living at advanced economy levels. Gaius also discusses the advanced v. developing economy conflict. 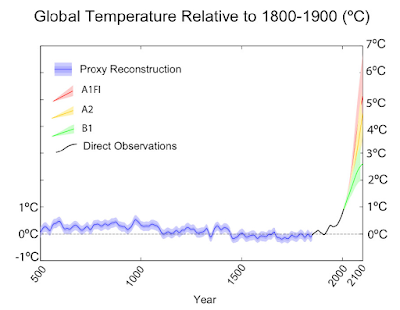 From time to time, the IPCC (the UN Intergovernment Panel on Climate Change) issues special reports along with its more general, every-five-years-or-so Assessment Reports. (The latest assessment report is AR5 from November 2014. It can be accessed here.)

These special reports cover subjects ranging from Safeguarding the Ozone Layer and the Global Climate System, published in 2005, to Renewable Energy Sources and Climate Change Mitigation, published in 2012. (The full list is here.)

They’re about to release a new special report, Global Warming of 1.5 °C, that details the risks if global warming rises above 1.5°C (but stays below the official target of 2°C) “in the context of strengthening the global response to the threat of climate change, sustainable development and efforts to eradicate poverty.” This is in response to concern expressed at the Paris meeting by especially vulnerable nations that two degrees warming is still too much.

Note that many of the (initially) most vulnerable nations are also among the poorest — small island nations like Kiribatu, the countries of sub-Saharan Africa and Bangladesh, to name just a few. Of course, every nation will ultimately be vulnerable. Florida, for example, is one Typhoon Haiyan away from a panicked collapse in all real estate prices and mass exodus.

Thus this conflict isn’t just about how much fossil fuel its owners get to turn into wealth (a lower warming limit means significantly lower fossil fuel sales); it’s also about what wealthy nations must do to help the poorer ones, if anything. It is in this context that nations at the Paris climate conference discussed which global warming limit they should target. About that discussion, climate writer KC Golden said this:

Climate justice advocates, led by the world’s most vulnerable nations, are pushing in Paris to move the target to 1.5 degrees C. Science, sanity, and moral responsibility are with them, but rarely are those enough to win the day. Sober COP-watchers gave the drive for 1.5 little chance to prevail, as Big Fossil continues to box the negotiators.

(“COP” means “conference of the parties,” meetings at which representatives of nations that are part of the UN’s climate mitigation efforts make decisions.)

So keep this in mind as you read on: there are two issues here, justice and money, not just the obvious one, money.

As a result, no one in power reads the reports themselves. Instead, people with actual policy control rely on the Summary only to tell them what to think. This makes control of the summary critical to controlling what actually gets done. If the underlying report contains data that screams, “Warning; extreme danger!” and the Summary says, “There could be a problem sometime, but no one knows when or for sure,” only the Summary will be acted on. The Summary could also simply exclude (be silent about) important findings in the scientific parts of the report.

Apply that idea — that manipulating these Summaries matters to people who want to manipulate the world’s response to climate change — to the especially sensitive special report that’s coming and you will learn a lot about the critical issues emerging around global warming. Again, the issues are justice and money, not just money.

Let’s start with the money issue. This is from the Guardian, which has obtained comments about what appears to be manipulation of the Summary for Policymakers being added to the report on 1.5°C global warming:

Warnings about the dangers of global warming are being watered down in the final version of a key climate report for a major international meeting next month, according to reviewers who have studied earlier versions of the report and its summary.

They say scientists working on the final draft of the summary are censoring their own warnings and “pulling their punches” to make policy recommendations seem more palatable to countries – such as the US, Saudi Arabia and Australia – that are reluctant to cut fossil-fuel emissions, a key cause of global warming. “Downplaying the worst impacts of climate change has led the scientific authors to omit crucial information from the summary for policymakers,” said one reviewer, Bob Ward, policy director at the Grantham Research Institute on Climate Change and the Environment.

The article identifies much of the missing information.

Cuts made to the final draft of the summary include:

• Any mention that temperature rises of above 1.5C could lead to increased migrations and conflict;

• All discussion of the danger of the Gulf Stream being disrupted by cold water flowing from the Arctic where more and more sea-ice is melting;

• Warnings about the dangers that 1.5–2C temperature rises could trigger irreversible loss of the Greenland ice sheet and raise sea levels by 1–2 metres over the next two centuries.

Other cuts from the summary include the sentence: “Poverty and disadvantage have increased with recent warming (about 1C) and are expected to increase in many populations as average global temperatures increase from 1C to 1.5C and beyond.”

The original summary also stated “at 2C warming, there is a potential for significant population displacement concentrated in the tropics”. Again this is not mentioned in the report for policymakers.

The clear implication of the Guardian article is that fossil fuel countries and companies want to water down the Summary because of the financial benefit: they get to sell more coal, oil and methane (“natural gas”).

The second reason wealthy nations are suppressing the worst information in the upcoming Summary relates to economic justice, climate reparations and the future economic development of poor and developing nations.

Global warming has economic impacts as well. Excised from the latest draft of the Summary is the observation that “poverty and disadvantage have increased” as global warming progresses. This increasing division pits wealthy nations against poor nations on a global scale, an idea also suggested by excised warnings about “significant population displacement.” In other words, explicit in the report, and implicit in what’s being omitted from the Summary, is recognition that not just the acquisition of wealth divides rich nations from poor ones, but also vast difference in climate consequences, at least initially.

This is a justice issue, which almost exactly parallels the national divisions caused by increasing U.S. wealth inequality, one consequence of which was the 2016 voter rebellion that ultimately brought Donald Trump to the White House (and almost put Bernie Sanders there instead). Imagine that disruption on a global scale. As the rich get richer, the poor get angry.

About reparations for climate damage, I wrote at the time the Paris conference concluded: “In a just world, who should pay when California loses its agriculture industry, when south Florida returns to the sea and real estate values collapse, when storms and floods make increasing millions homeless and vulnerable to disease, starvation and chaos? How is the answer not Exxon, the Kochs (Koch Industries is privately owned), Chevron, Total and Shell Oil, the sheikhs of Saudi Arabia, and all the rest?”

Consider also future economic development from a climate justice perspective. Almost all of the wealth created by two centuries of fossil fuel exploitation was captured by nations that burned and benefited from it — primarily the U.S. and Western Europe. Earth’s atmosphere is now flooded with greenhouse gases, so much so that there’s no room for even more emissions without dire consequences for us all.

Yet the rich nations, who’ve already pulled themselves into “first world” status thanks to previous and extensive fossil fuel burning, want to (a) deny the same path — fossil fuel use — to poor, non-industrialized and emerging nations “for the good of the world”; (b) deny that they should share some of the wealth acquired from fossil fuel use to aid in other nation’s development; and (c) deny any reparations at all to vulnerable nations when the crisis caused by first world fossil fuel use hits them early and hard. Poor nations see this stance quite clearly for what it is.

(For the U.S.’s shameful attempt to blackmail poor and vulnerable nations at the Paris talks to give up their justice claims, read “U.S. Offers Vulnerable Nations a Deal, But They Can Never Ask for Climate Money Again.”)

This building conflict between rich and poor nations, which may never be resolved, is a prescription for global war. But it won’t be one with armies fighting armies. This war will look like a global insurgency instead, not city-wide or nation-wide, but planet-wide, with armies of some countries fighting populations in others. In fact, it will look very much like what’s happening between the Israeli army and the people of occupied Palestine, but with much more chaos because the battle space, instead of being greatly constrained, will encompass literally all the world.