Thanks for accommodating our comments holiday. Even though the weather in Maine was terrific for nearly all of my week there, I still needed over 12 hours of sleep for three days running! So I desperately needed this break.

On a different topic: we expect to have a high level of CalPERS coverage for the next few weeks. The Marcie Frost misrepresentations story is very much in play. It is separately pressing because Board President Priya Mathur’s seat is being challenged by Jason Perez, and Frost is up for her annual review by the Board at the upcoming board meetings, which start on Monday September 24 (I believe her review is to take place in closed session on September 26, but need to verify that).

‘End of days’: Birth of red heifer in Israel signals coming of Messiah claim Hebrew scholars RT. Um, why should the Messiah respond to gaming the prophecy?

‘Tone deaf’ Playboy Club opens in New York, defying the #MeToo era Guardian. Ahem, Playboy Clubs are retro and tame compared to strip clubs….of which there is no shortage in NYC.

We DIDN’T win the war! Like us all, PETER HITCHENS grew up on stories of Britain’s heroic victory over Hitler… but now, without questioning the bravery of our troops, he’s written a book challenging all we think about WW2 Daily Mail

Call for atheism to be included in religious education Guardian (Dr. Kevin)

Among those near Ground Zero on 9/11, illnesses abound 17 years later Guardian. My apartment is about 6 miles from the WTC site. Prevailing winds generally sent the smoke into Brooklyn, but on the few occasions when it went north, it was acrid even at this distance.

High Price Of Insulin Leads Patients To Ration The Drug. That Can Be Lethal NPR (UserFriendly). Appalling.

Brexit: Barnier says agreement possible by early November BBC. Only if every member of the Tory leadership plus key backbenchers like Rees-Mogg have brain transplants.

9/11 In Context George Washington. Quite a list. Including it for relevance to Syria, but it is impressive regardless.

Trump faces buzzsaw in ‘year of the woman’ The Hill. The Democrats are determined to do anything other than suck less.

Yes, let’s wipe out Trump. But take neoliberal Democrats with him, too David Sirota, Guardian (UserFriendy)

Can Mark Zuckerberg Fix Facebook Before It Breaks Democracy? New Yorker (David L, furzy). Pray tell, why should he?

The Big, Dangerous Bubble in Corporate Debt New York Times. I should debunk this in a post but I don’t have the energy. The comparison to 2008 is histrionics. The reason the financial system nearly failed then was due to a derivatives crisis that wiped out collateral used in the repo market (AAA tranches of CDOs).

Subprime shorts used largely synthetic [made of credit default swaps] CDOs to subvert normal market behavior and put on massive bets on subprime failure without leading CDS prices to rise (which would have among other things made additional wagers less attractive plus through arbitrage made subprime loans way more expensive). Due to lack of central data plus differing definition of what “subprime” amounted to, the amount of CDS wagers on subprime have been estimated at 4-6X the real economy value of the bonds. On top of that, highly leveraged, systemically important players like AIG, the monolines, Merrill, Citi, and some major Eurobanks were on the wrong side of these bets. We discuss this in detail in Chapter 9 of ECONNED.

Subprime mortgage defaults by themselves would not have produced a global financial crisis. They would have produced a real economy hit on the order of 150% of the S&L crisis. Recall that the S&L crisis did produce a very nasty recession in the early 1990s. Bad, but nothing like 2008. And as Cohan effectively admits, the big losers in corporate debt defaults would be investors, not banks.

The Real Cost of the 2008 Financial Crisis New Yorker (furzy)

Amazon bought Whole Foods to take on the grocery business — but one competitor shows where its plan is falling flat Business Insider. Recall we were in the decided minority that was skeptical about this deal.

New Study Confirms Offshore Earnings are Flowing into Stock Buybacks, Not Jobs and Investments Just Taxes. Also as we predicted.

Backyard hooligans steeling cat food! (You may notice that the center one, the mom, is standing in the water dish—it’s the best way to assure herself she gets to dip her hands full of cat food in the water before eating it.) 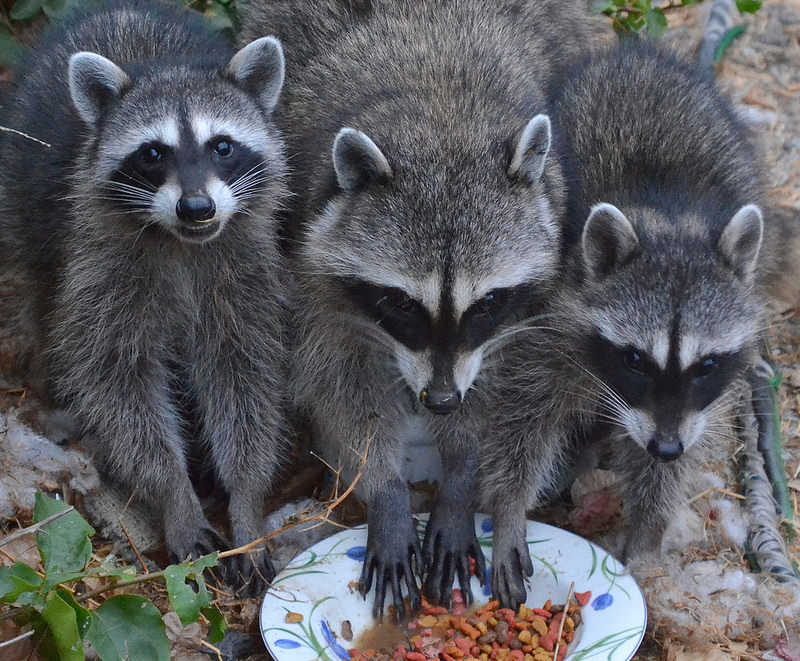