Yves here. One issue that is important to the “unfair inequality” model the authors use is based on the idea that redistribution needs to be balanced against giving people incentives. The idea of money as an incentive is IMHO overrated, but America is set up to make it way more important than it ought to be. High costs of housing and healthcare lead to a situation where the earnings level needed to be secure (as in being able to pay for necessities and some luxuries, like entertainment and a vacation, and also put away enough for retirement and emergencies) is very high. Add to that if you have kids and want to send them to college, the level of income required is even higher. And that’s before getting to the fact that young people are often saddled with student debt.

On top of that, American has long been plutocratic. Pay is too often seen as the same as worth.

By contrast, in Japan, the disparity in pay level between top executives and front line workers was and is very low compared to America, yet the Japanese are not slackers. One big reason is Japanese companies are very good at creating non-income incentives, like having it be well known which job postings are consistent with being highly regarded. And the perks that confer high status are relatively inexpensive, like (for senior managing directors) having a car and driver and a generous expense account. Another famous example of people working hard for status is the Linux developer community.

Every society has income inequality. How much of this is a legitimate target for policy? The answer clearly depends on the principles which underlie our notions of an ethically acceptable distribution of income. One way to approach measurement of ethically unacceptable inequality is through a two-step process. First, we set up an ideal or norm distribution of income which satisfies key ethical principles. Second, we apply a metric for the distance between the ideal and the actual. Both of these steps are normative in nature. This is especially so for the first step, which requires reaching deep into our moral intuitions and our conceptualisations of legitimate and illegitimate outcomes and processes.

Even for those for whom the ideal is perfect equality of income, it should be clear that in practice the ideal is infeasible or undesirable for a number of reasons, including the incentive effects of attempts to redistribute. The Nobel prize-winning contribution of Mirrlees (1971) sets out a framework in which the ideal of egalitarianism in outcomes can be reconciled with incentive constraints. However, a strong strand of the literature argues that over and above incentive issues, which will be present in any attempt to redistribute towards any norm, equality of incomes should not be the ideal to strive for.

With roots in the work of Rawls (1971) and Dworkin (1981a, 1981b), this line of thinking has been crystallised in the work of John Roemer (1998) through the distinction between ‘circumstance’ and ‘effort’ as determinants of income. Circumstance refers to those factors which are outside the control of the individual such as race, gender, parental wealth, and so on,1 while effort is meant to characterise those factors which the individual controls and which in turn affect income. The fraction of variation in income which can be attributed to circumstance is then proposed as a quantification of the degree of ‘inequality of opportunity’ or unfair inequality. In other words, the norm distribution of income is that which equalises average income across the circumstance types. Decomposition techniques then supply the metric of distance, and these can then be applied to data to derive measures of unfair inequality across countries and over time. The methods are relatively easy to implement, which perhaps explains why there is now a veritable mini-industry doing such calculations (see for example the survey by Roemer and Trannoy 2015).

The intuitive power of a division between circumstance and effort in delineating legitimate from illegitimate variation in income, and thence the norm distribution of income which captures the intuition, is very clear. But it is not the only moral intuition at play where income distribution is concerned. Imagine yourself serving on a soup line. As the indigents shuffle towards you and you reach out with soup, you are informed that the devastating outcome you see before you is the result of effort not circumstance, that the person before you had a ‘good start’ in life but ‘blew it’ because of his or her own choices. Would you then pull back your hand and not give out the soup? If not, then clearly some other moral intuition is cutting across the equality of opportunity argument – we call it the ‘freedom from poverty’ requirement.

Put another way, the norm distribution of income should capture both fundamental moral intuitions. On the one hand, individuals should be held responsible for decisions inside their control. However, on the other hand, there should be a floor to extreme outcomes. The overall measure of unacceptable spread in the income distribution, which we might term unfair inequality, should thus reconcile equality of opportunity andfreedom from poverty. Our recent wok is devoted to this task (Hufe et al. 2018).

Conceptually, we construct the norm distribution of income as follows. We first move all those who are below the poverty line up to the poverty line. This of course raises the question of where the resources come from to achieve this goal. We specify that these are raised through a proportional tax on the surplus of incomes minus poverty line for incomes which exceed the poverty line. This also preserves overall mean income. If we were to stop here the inequality which remains is considered fair or legitimate from the perspective of people who only care about inequalities resulting from some people not having enough to make ends meet. But this may still leave some people disadvantaged relative to others based on factors that they cannot influence in the first place. Hence, in the following we modify the resulting poverty free distribution to satisfy the equality of opportunity ideal. That is, we equalise mean incomes across the circumstance types by proportionate scaling up or down of all incomes exceeding the poverty line depending on their type. Again, this will not change overall mean income.

Given the ideal norm distribution relative to the observed distribution, the next question is on the distance metric between the two. The literature has proposed a number of possibilities (e.g. Magdalou and Nock 2011). We focus here on a family that resembles the generalised entropy class of inequality measures, and in our empirical calculations we highlight a specific member of the family which relates closely to the well-known mean log deviation (MLD) metric. Our measure of unacceptable or unfair inequality is then the distance between the observed distribution and the ideal norm distribution constructed as set out above, using the MLD metric.

We estimate our measures of total inequality and unfair inequality for a cross section of 31 European countries using the 2011 wave of EU-SILC data for individuals aged 25–59 years. We use categories of (i) biological sex, (ii) migration background, (iii) educational status of parents, and (iv) occupational status of parents. The intersection of categories defines 36 circumstance types. For poverty lines, we use 60% of the country-specific median equivalised disposable household income, the European country-specific ‘at risk of poverty’ line.2We also present time series of estimates for the US for 1969–2012, using PSID data for individuals (also for ages 25–59 years) and with the poverty line fixed at 60% of the year-specific median equivalised disposable household income (see Hufe et al. 2018 for full details). 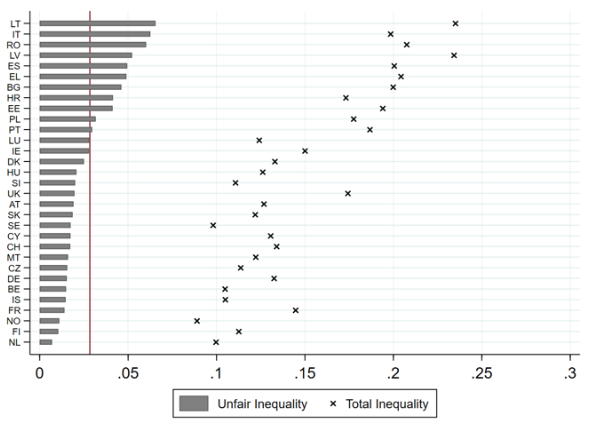 Figure 2 The evolution of unfair inequality in the US 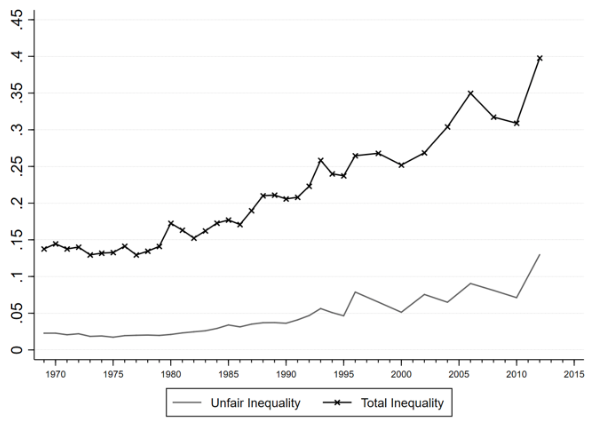 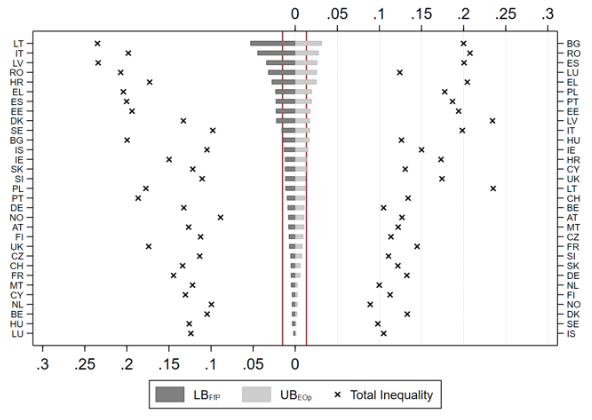 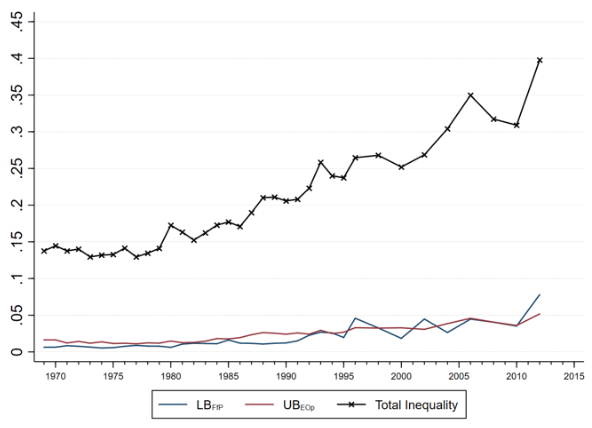 In our paper, we show that our results are robust to a number of variations, including alternative metrics for distance between observed and norm distributions, alternative poverty thresholds, and alternative norm distributions. One interesting point which emerges is that our unfairness measures are much more sensitive to variations at the bottom of the income distribution than at the top. But our central point still stands. Our new measure of unfair inequality, which reconciles the ideals of equal opportunities and absence of poverty while treating both as co-equal grounds for policy intervention, can provide fundamental insights into the normative structure of income distributions and their evolution.