Since this is Labor Day weekend, I thought I’d meander forty years down memory lane, to the eight years when I worked in factories, in Providence, Rhode Island, having flunked out from a purpose-free collegiate experience. (Odd for a child of scholars, but there it is.) I certainly didn’t become an organizer, though I met one or two, and I did read Das Kapital, but I’m not sure what moral to draw; this is not a bildungsroman, in other words; it’s just something I did. Perhaps one will appear as I go along, or you will come up with one yourself.

Light industry in Providence at that time was centered on the West Side — the university was the East Side, up on a hill — at the interection of Broadway and Westminister Streets, along the Woonsquatucket River, on “the fall line,” which you may have learned about in school, where waterfalls supplied the power to the original mills. The Woonsquatucket was flanked by a maze of narrow streets and rail spurs serving small textile firms, jewelry plants, plating factories, jobbers, warehouses, lumber yards, and all the small businesses that served those firms and the people who worked there: Diners — Google Maps discloses that there is, still, a New York System hot dog place — retail outlets, insurance firms, barber shops, banks, bars. No chains that I can remember, and of course no mobile phone or electronics stores. No bookstores or movie theatre, unlike the East Side.

Google Earth, to my surprise, shows that at least two of the factories I worked at have not been torn down. (I can tell I have the right buildings by their relationship to the railroad tracks and the Woonsquatucket, respectively.) There are more parking lots than I remember, and the streets seem more unkempt, but the neoliberal neutron bomb hasn’t destroyed everything. Here’s a shot of Westminster Street from Google Street View: 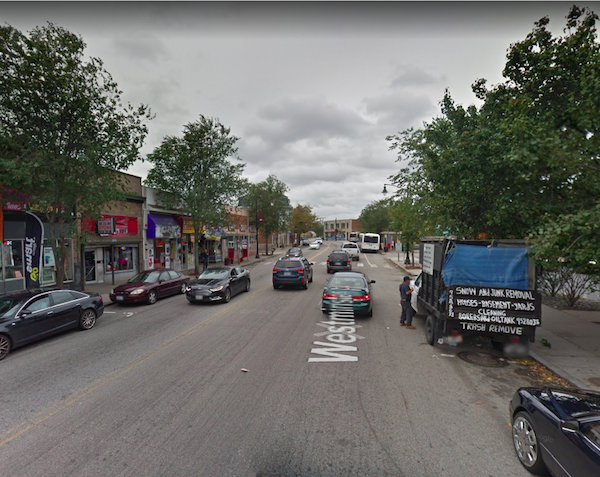 As you can see, a retail corridor that if not exactly thriving — where’s the urban edginess, where are the “authentic” historical buildings to attract the “creative class”? — is at least surviving, roll-up security shutters at all. But do note the Third World-style entrepreneurialism displayed by the man with the “Snow and Junk Removal” at right! That truck would not have been there, in my day (“I was lucky”).

So here is another shot from Google Street View: The frontage of the first mill I ever worked at; the first full-time job I ever had. I had made a list of jobs from the Classified Ads in the Providence Journal — there were pages of them — and this place was first on the list. They hired me, despite my long hair, immediately, for $2.25 a hour. (The ad said “will train,” which I would have needed for any job except shelving library books.)

That wage was more than sufficient for me to reproduce my labor power: I could afford an apartment of my own, close to the East Side, if not on the East Side proper, and could cook for myself, take the bus to work, get morning coffee, buy plenty of books, and even the occasional beer. I was then, I suppose, 22 or 23. After a year, they raised my wage to $2.35.

The plant employed perhaps eight or nine people; we manufactured white metal costume jewelry, mostly for Sarah Coventry (now defunct, but collectible). The boss (nice car) and the supervisor (nicer car) were both men, and the mold-maker and caster (me) were men. Men ran the business, designed the pieces, and cast the parts; women assembled and packaged them, perhaps burnishing them or adding rhinestones.

I was, as it happens, an excellent and very productive white metal caster. “Manual” and “physical” labor are really misnomers; if you want to be good at what you do, you have to think about it. I forget, to my shame, how orders came to me — perhaps the mold itself, with a ticket? — but on my bench would appear a mold, made of rubber by the moldmaker, for each style of jewelry: Pins that were little cars, bracelets to be linked, pendants… Each had a separate mold, and my job was to take the mold and cast the pieces such that they had no flash for the women to trim, and there were as few wasted pieces as possible, and without taking all day about it. I would take the two halves of (a) the mold, (b) dust them with (some sort of doubtless quite unhealthy) talc, match the two halves, open the lid of the drum, put the mold in the drum, put a (c) heavy weight on top of the mold with a tube that would protrude through the top of the lid, close the lid, set the drum to (d) spinning, grab my ladle and fill it with (e) hot metal, and pour the metal quickly into the tube, which protruded from the top of the drum. Centrifugal force would them drive the white metal into the crevices of the mold. After a time (f), I’d stop the drum spinning, remove the mold, split it apart, and pull out the pieces. It was quite a balletic process, which I did several hundred times a day. You will see that the variables (helpfully labeled) are the (a) the heat of the mold’s rubber, determined by how many pours the mold had undergone, (b) the right amount of dust, (c) the weight, (d) the speed of the spinning, (e) the composition and temperature of the metal, and (f) the length of the spin. Each of these varied by the mold. So you really had to pay attention! My innovation was to write down the formula for (a)-(f) on top of the mold. (I also thought, at that time, I was a poet, so I had a small notebook at my bench, in which I also wrote; but of course I was too callow to have anything important to say.) Of course, there weren’t safety glasses or gloves or anything of that sort.

I can’t show you the frontage of the fifth or sixth factory I worked at, because I can’t get close enough to it in Google Street View. However, I navigated to the back of the building. Here it is: 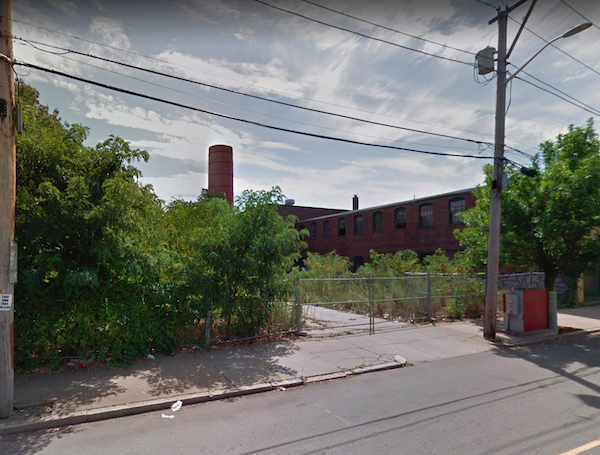 This plant seems to be abandoned, since the property looks overgrown; it has not, at least, been converted into condos. The smoke stack serves the steam boiler, which Lucky Strike-smoking and bent-backed Leo, the oldest of us, was trusted to come in and fire up, at five in the morning in the winter. I think the classic New England mills are gorgeous: There’s something about the materials and proportions, the high brick walls, the wide, tall arched windows with big panes, the wood floors, and the shallow slant of the roofs that’s wonderfully calming[1]. Everything feels the right size, though perhaps that’s me. This being a working mill, the wood floor was saturated with oil (though not slippery), and the windows were covered with fine, white dust. I started out as a braider tender, at $3.25 an hour:

Braiders make all kinds of cord: Venetian blind cord, yacht cord, macrame-style cord, etc. The braider machine interweaves thread from spools [bobbins] to make the cord which is run onto a drum. Spools run out, drums need to be doffed, machines crash, etc.

After (see above) proving myself to be an excellent and very productive braider tender — most of the tenders were women, and so I was unusual — I was promoted to braider mechanic, which, at $5.00 an hour, made me practically a labor aristocrat. Rather than creating yet another helpfully lettered list, I’ll just tell one anecdote: How I came to understand what having “a screw loose” means.

The cord being interwoven from the bobbins of thread by the braider machine must be in constant tension at all times; if it is not, the machine will stop. As the last thread unwinds from a bobbin, it goes slack, and the machine stops, which is how the tender knows to replace the empty bobbin with a full one, and start the machine up again. In fact, that’s the only reason the braider machine should stop; after all, just like a printing press, if the machine isn’t running, it’s not making money. So there was this one machine: Every morning when I came in it would be stopped, but with full bobbins. Why? I determined that there was a screw loose: The screw, at the top of the machine, that guided the cord onto the drum. With that screw loose, the cord went out of alignment, was no longer pulled onto the drum, and so it went slack. The machine stopped. Pleased with myself, I tightened the screw. The next morning, the machine was stopped again. I tightened the screw harder. When the machine was stopped the next morning, I looked further. Each braider machine has a heavy cast iron frame with four legs; each foot of each leg is screwed the floor. One of the floor screws was loose. I tightened that screw. Next morning, the machine was stopped. Both screws, now, were loose, top and bottom. What was happening: The frame itself was slightly out of true. The entire mill vibrates from the running braiders at all times — walking into it, in the morning, was like hearing the sound of the sea — and the out-of-true frame was vibrating itself loose from the floor. Once loose from the floor, the machine vibrated the screw loose that guided the cord onto the drum, the cord went slack, and the machine stopped. I shimmed the errant foot of the braider machine. The next morning it was still running, and the drum was full of cord.

The moral of the story: When there’s “a screw loose,” you have a systemic problem — in this case, the entire vibrating building + a frame out of true. Screws don’t just loosen themselves for no reason. I loved being a braider mechanic!

Reading over these little anecdotes, it strikes me how much is gone. There are no classified ads. Firms don’t train. You can’t rent a decent apartment on a factory worker’s wage. If there are casting machines, now, they’re computerized. The Venetian blind cord business, I am sure, went off to China, or Bangladesh, or Cambodia (and who has Venetian blinds now, anyhow?) At none of these jobs was I tracked or monitored or measured in any way; I’m sure that’s gone, too. And of course the whole Woonsquatucket area is far less dense, much more unkempt, and not as crowded and vibrant now, as it was when I was coming up. It looks poor. It didn’t look poor then. When I became a braider mechanic, one of the ladies said to me — they made much of me, and would give me sandwiches for lunch — “Now you’ll always have a job!” How wrong she was. Creative destruction, surely. But for whom?

[1] This is not my mill, though it might as well have been: 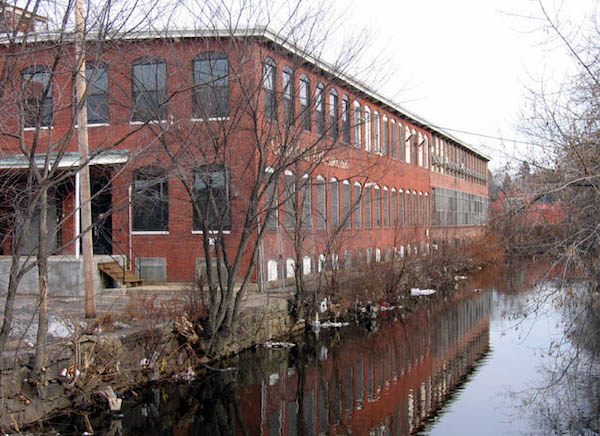