Yves here. It’s useful to have a study confirm the connection between limited liability and more risky owner/operator behavior. Recall the New York Stock Exchange had stipulated that the exchange had to approve of all of the shareholders of member firms, and in the wake of the Depression, had further required that all NYSE members be partnerships to help restore trust in equity investing. That went out the window in 1970 when Donaldson Lufkin & Jenrette filed to go public and the NYSE didn’t kick them out.

I worked at Goldman when it was a partnership, and the firm worked very hard to make everyone, even the most junior professionals, understand sources of legal and business risk and steer clear of them. Liability avoidance was close to a religion.

In order to protect the financial system from excessive risk-taking, many argue that bank managers need to have more personal liability. However, whether the liability of bank managers has a significant effect on risk-taking is an open question. This column studies a unique historical episode in which similar bankers, operating in similar institutional and economic environments, faced different degrees of personal liability, depending on the timing of their marriages, and finds that limited liability induced bankers to take more risks.

In 2015, seven years after the failure of Lehman Brothers brought the financial world to the brink of collapse, Dick Fuld, the former CEO, sold his Idaho mansion for around $30 million dollars, setting a record for private home auctions. It seems he was ready to leave his private trout-fishing stream and return to the world of high finance.

Naturally, Dick Fuld lost significant sums of money when his bank collapsed. Bebchuk et al. (2010) calculate that, in 2000, Fuld owned about $200 million of Lehman Brother stock, which would eventually become worthless. Nevertheless, Fuld withdrew about $520 million from the bank between 2000 and 2008 in the form of cash bonuses and equity sales, none of which was accessible to Lehman’s creditors.

This raises the question of whether bank managers’ incentives are set appropriately to protect the financial system from excessive risk-taking. Managers can cash in on a bank’s profits when things are going well, but they shoulder minimal losses if the bank fails (Bhagat and Bolton 2014). This limited liability may encourage them to take undue risks with depositors’ money. There is a growing chorus of commentators arguing that the financial system will only be safe if bank managers have more personal liability (e.g. Kay 2015, Cohan 2017).

Whether the liability of bank managers has a significant effect on risk-taking is an open question. Bank managers care about their reputations and future careers; so, they might try to avoid the failure of their bank at any cost. Other stakeholders, such as uninsured creditors, may be able to force banks to reduce risk-taking (Calomiris and Kahn 1991, Diamond and Rajan 2000). To make their case, proponents of increased personal liability often point to what happened to investment banks over the last few decades. Before the 1980s, investment banks operated as partnerships with unlimited liability. During the 1980s, they went public. Anecdotally, this seems to have gone hand in hand with increased risk taking. However, this coincided with a period of general financial deregulation. So, how do we know what caused investment banks to take more risk?

In recent work (Koudijs et al. 2018), we study a unique historical episode in which similar bankers, operating in similar institutional and economic environments, faced different degrees of personal liability, depending on the timing of their marriages. Our findings suggest that limited liability really matters for bank risk-taking.

Banker Liability in the Past

While bankers today shoulder relatively little risk, this was not always the case. During the US National Banking era (1864-1912), shares in national banks carried double liability. If a bank failed, each shareholder needed to pay back depositors out of personal assets, up to the amount of his original investment in the bank. For example, if he initially invested $1,000, he could lose that investment plus an additional $1,000. Bank presidents – who were responsible for the day-to-day operations of the bank – were major shareholders, typically owning 10-20% of their bank’s stock.

The early part of the National Banking era coincides with a change in the marital property laws of certain US states. Under traditional American common law, when a woman married, her property became her husband’s. Starting in the 1840s, states started to pass Married Women’s Property Acts (MWPAs), which allowed married women to own property in their own right. However, these laws only applied to couples married after the passage of the MWPA. Crucially, the MWPAs protected a married woman’s property from claims against her husband. If her husband was a national bank president, this included double liability claims on his bank’s shares.

The typical national bank president during the 1860s and 1870s was a middle-aged, married man. Depending on his birth year, age at marriage, and state of marriage, he may have been married before or after the passage of a MWPA in his state. In the latter case, his wife’s property would have been protected from any double liability claims if his bank failed. As such, his household liability would have been less than that of an otherwise identical banker who was married before a MWPA.

Here’s a simple example. A banker with $100 in assets marries a woman with $100. The banker invests $75 in his bank. If this marriage occurred before a MWPA, depositors (represented by the regulator) could lay claim to $75 of the household’s remaining personal assets if the bank failed. However, if the marriage occurred after a MWPA, depositors would only have a right to the $25 the banker individuallyhad left. This reduction in personal liability may have led the banker to put his depositors’ money into riskier but higher-yield investments.

We collect data on the activities of New England national banks during the 1860s and 1870s, as well as information about bank presidents’ marriage histories. This allows us to classify bankers as ‘protected’ (i.e. married after a MWPA was passed in his state) or ‘unprotected’. We then compare the risk-taking behaviour of protected and unprotected bankers.

A key measure of bank risk-taking is leverage. We define this as loans and securities  – inherently risky investments made by the bank – relative to capital invested in the bank by shareholders. A bank that extends more loans relative to capital is more likely to suffer losses that render it unable to pay back depositors.

As it turns out, bankers with less personal liability managed more highly levered banks. More precisely, a bank’s ratio of loans and securities to capital was 7 to 10 percentage points higher if its president was married after a MWPA. This does not reflect underlying differences between protected and unprotected bankers (such as age), or the characteristics of counties or towns that they live in. It also does not reflect characteristics of the banks themselves – when an individual bank switches from having an unprotected president to a protected president (through turnover, or a change in the president’s marital status), leverage increases in that bank.

Not surprisingly, the impact of a president’s protection status is contingent on the relative wealth of his wife. Figure 1 plots the difference in leverage between banks with protected and unprotected presidents with different intra-household allocations of property (inferred from the ratio of the wife’s family wealth to the husband’s family wealth). Being married after a MWPA only increases leverage for bankers whose wives own a sufficiently large share of the household’s property.

Figure 1 The effect of limited liability on bank leverage 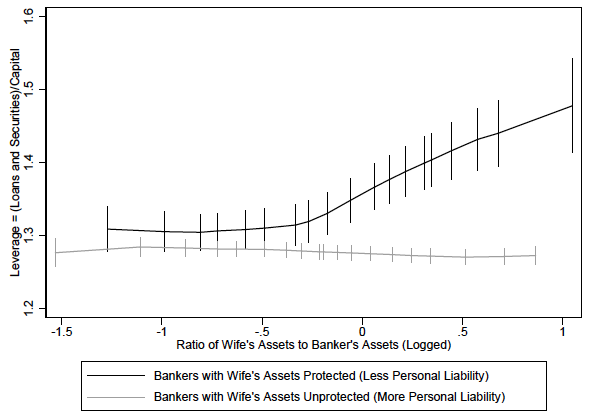 Limited Liability and Financial Crises: The Panic of 1873

What were the consequences of protected bankers’ risky behaviour? We look at what happened to banks managed by presidents who faced different degrees of personal liability after the Panic of 1873. The Panic of 1873 was a nationwide financial crisis, triggered by the failure of an East-Coast investment bank, and followed by a string of bank failures and a lengthy recession (sound familiar?).

In fact, banks managed by bankers with less personal liability fared worse after the Panic. Banks managed by bankers married after a MWPA experienced a larger decline in earnings relative to capital over the course of the depression (Figure 2). Moreover, this effect is most pronounced for bankers with relatively wealthy wives, whose personal liability would have been most limited by a MWPA (Figure 3). 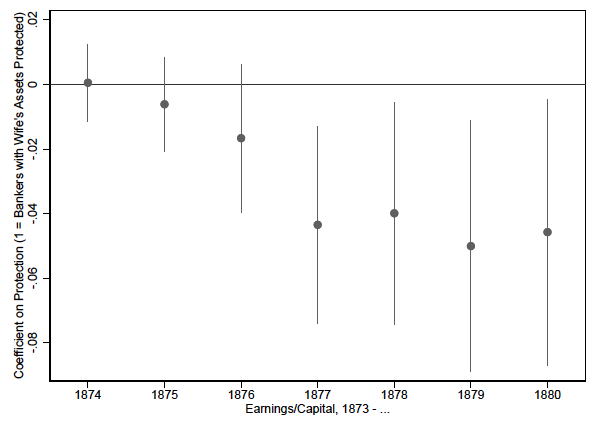 Source: Figure 2, Panel A  in Koudijs et al. (2018).
Note: Figure plots coefficients from regressions of aggregate earnings over capital on the protection status of the banker in 1873, including fixed effects and other controls. The vertical lines denote the 5thand 95thconfidence intervals. 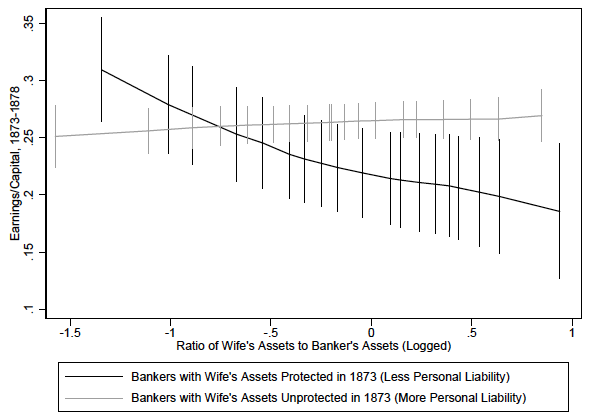 In short, limited liability induced bankers to take more risks, and this had real consequences for performance during a financial crisis.

Our findings strongly suggest that increasing bank managers’ liability would discourage bank risk-taking, subject to the usual caveats about extrapolating from a historical period to the present.

What does this imply about optimal bank regulation? One thing to consider is whether limiting bank risk-taking is a good thing. While less-risky banks may reduce the likelihood of a major financial crisis, they may also limit beneficial lending to innovative new businesses. We find no evidence, however, that this was the case in the 19th century – the protection status of local bankers did not affect innovation in manufacturing firms, measured through the adoption of steam power. Still, this evidence is only suggestive. More work remains to be done to establish the ‘right’ amount of banker liability.

One important lesson is that, in terms of policy, one size does not fit all. The effectiveness of a policy that increases banker liability will depend on bankers’ individual circumstances. Bankers with a comfortable ‘cushion’ (through marriage or an independent source of wealth) may respond differently than those who do not.

So long as our laws allow bankers to shield the profits from risky investments from the claims of creditors, bankers will find clever ways to do so. Which brings us back to Dick Fuld. In 2009, when calls for personal lawsuits against bankers were loudest, Fuld ‘sold’ his $13.5 million Florida beachside getaway to his wife for a mere $100—a modern twist on the concept of limited spousal liability that began with the MWPAs. Regulators should ask themselves whether the benefits of limited liability outweigh the costs. Our research suggests that they may not.