If you can make sense of the Brexit press you are a better man (metaphorically speaking) than I am.

The rumors over the last week were hopeful but bizarrely non-convergent, with verbal mini-bouquets from Donald Tusk and Jean-Claude Junkcer matched by cheery rumors from unnamed sources who supposedly knew what was up on the UK side. The EU was supposedly making concessions. Wellie, those concessions might simply mean the EU would let the UK have a pretty-close-to-content-free “future relationship” section. Theresa May was very secretly working on Chequers II. And the DUP’s Arlene Foster was wobbling just a little bit.

That was two days ago. Bloomberg reported, with no specifics, that the UK indicated a breakthrough was not nigh. Then the Sun said May was digging in her heels and demanding the EU make major concessions and give “a precise Brexit framework.” And she insisted the EU “accept a UK wide customs solution as a backstop to keep the Irish border open” and said she won’t propose anything else.

Today, the Financial Times, consistent with earlier reports, said that as many as 30 Labour MPs might join the Tories to back May’s Brexit agreement….assuming she gets one. This story is silent on whether the Tories are whipping Labour members or wether the Labour MPs have concluded on their own that they don’t want to vote for a no deal outcome. If they are being solicited by No. 10, that would suggest that May is not on to Chequers II, since it would be exceptionally bad form to give Labour members an information lead over Tories, and you’d expect to see some leaks about what Chequers II might be if May were trying to get backing for it.

Consistent with the talks gridlocking again, Barnier put off releasing a report scheduled for October 10. According to RTE (hat tip PlutoniumKun):

Senior officials have played down the prospects of the EU’s chief negotiator, Michel Barnier, bringing forward a text to be approved by the European Commission at its weekly meeting…

It had been widely expected that the commission would adopt its version of that blueprint, known as the Joint Political Declaration, on Wednesday….

However, officials have stressed that Mr Barnier would be more likely to produce an “annotated” document, containing little more than headings, and even then that may not be formally adopted by the College of Commissioners on Wednesday…

A number of high-ranking sources in Brussels have, however, played down the optimism that was expressed over the weekend that a deal was imminent.

Oh and Arlene Foster had a thing or two more to say about the Irish border matter, and the DUP’s old red lines are very much in place.

So where does this leave things?

If nothing else, this is the second time Theresa May has won on process. Recall that the EU tried to set the order and timing of negotiations with an April 2017 EU directive. The UK did not attempt to negotiate that in advance, and it squealed at some of its requirements, most important, on settling the so-called exit bill as one of the first orders of business. But the EU designated the Irish border question as one of the first three items to resolve, and let that slip to December 2017, only to let it slip again with the Joint Agreement.

Admittedly, May lost with her ploy to try to win EU leaders over to her point of view with a personal appeal in Salzburg last month. But even though the EU told her firmly, “No Chequers” and “come back with a new plan by October 18 or no November talks,” May has successfully stared down the EU on changing the order of battle. That might not be entirely her doing. I’m not clear on EU protocol, but Tusk (and Juncker) may not have had authority to make this change on their own, and some countries that are nervous about a crash-out Brexit might have pressed them to relent.

But winning a power struggle over process isn’t at all the same as winning one on substance, and the fabulously stubborn May may well have misinterpreted the first as a sign that if she persisted with her submarine routine, she’d get the EU to agree to Chequers too, when that is simply never going to happen, and if she understood at all how the EU or even a real regulatory framework operated, she’d understand why. Politico has an oddly chipper article listing five major areas where they are schisms among key parties:

The big idea at the heart of the U.K.’s backstop proposal for avoiding a hard border between Northern Ireland and the Republic of Ireland (the key to a Brexit deal) is the “bridge.” This is the term senior officials use for the Temporary Customs Arrangement (or TCA) proposed by the U.K. in June.

It’s essentially a temporary customs union with the EU — the U.K. will apply the EU’s Common External Tariff, will abide by the Union Customs Code “and such other parts of the Common Commercial Policy that are required.” It will apply after the transition period if, by then, there is not a signed and sealed U.K.-EU free-trade agreement to bring into force. (Spoiler: There won’t be, these things take years.)

The EU opposes the idea because, under its definition, the backstop can only apply to Northern Ireland, not to the whole U.K. EU chief negotiator Michel Barnier has spoken out against a “U.K.-wide” backstop since June, and EU officials insist the position has not changed…

Let me stop here and scream because even if the EU weren’t opposed, this scheme wouldn’t accomplish the UK’s aims. A customs union does not confer “frictionless trade”. All it does is stop tariffs from needing to be collected. It does nothing to assure consistent regulatory standards and enforcement, as so would not prevent all sorts of non-tariff trade barriers from coming into play.

Quite a pretty picture, no? And the UK tried increasing pressure on the EU on a different front. From the Financial Times:

The Bank of England and the financial services industry on Tuesday pressed the EU to urgently tackle legal uncertainty surrounding vast amounts of derivatives because of Brexit.

Calling for “timely action” by EU authorities, the BoE’s Financial Policy Committee said if the UK crashed out of the bloc without a withdrawal agreement it risked rendering void £41tn of derivatives. 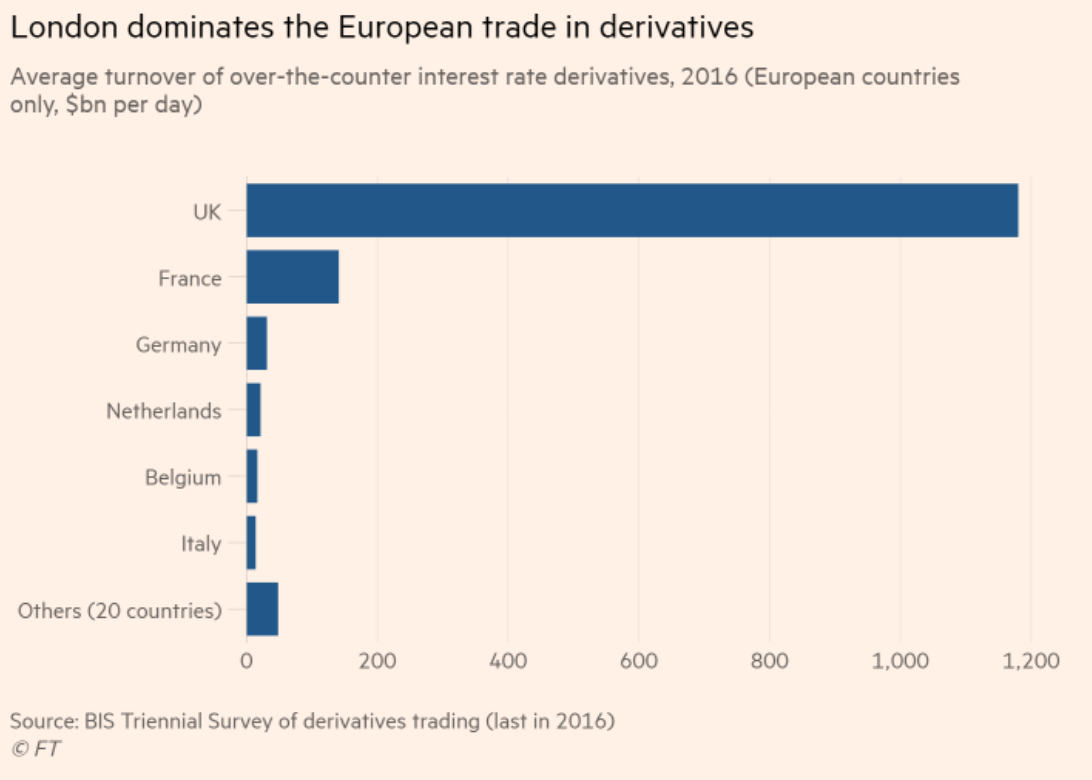 For EU banks to transfer derivatives business from the City to clearing houses in the bloc would involve closing out of thousands of contracts and opening new ones elsewhere. That would result in the banks having to lodge millions of dollars in extra margin payments with EU clearing houses to cover their derivatives positions, as well as setting aside more risk capital.

There are also significant practical impediments to EU banks moving derivatives business because their vast portfolios of contracts are complex.

For some kinds of swaps, there are few alternative clearing houses in the EU to those in London. For other derivatives, there are no other options.

This appears to be the sticking point:

In an effort to prod the commission into action, the BoE suggested the EU has got more to lose than the UK over this issue. It flagged how the European Central Bank estimates 90 per cent of interest-rate swaps coming from the EU are cleared through London. But for LCH, derivatives business secured from EU banks is just 14 per cent of the global total.

So is this a very high cost, high risk way to force more business to the Continent? Or is there a big piece we are missing, like most of the derivatives are short term, and so conceivably could be rolled over at maturity (still risky due to basis risk, but perhaps not as bad as trying to book new position that replicate current ones (as in having not just extra margin needs but potentially double exposures due to not being able to match close-out/new booking times very precisely?) Or are overwhelming majority of derivatives placed by trading desks and hedge funds, as opposed to commercial customers, and the EU isn’t charitably disposed towards them?

In any event, the looming Brexit car crash continues to be interesting, and not necessarily in a good way.