Lambert here: Our own Richard Smith, in “A suspicious sniff at CoCos” from 2011 (!) defines CoCos:

CoCos are interest bearing instruments that convert, mandatorily, into common equity, when some capital-related trigger is breached; the idea is that banks are automatically and mechanically recapitalised as their capital is eroded by the latest daft lending fad, runs are averted, and all is well with the world.

Takes a stroll through what the financial markets will actually do:

Groovy: CoCo hedging sets off a shorting binge, which sets off a run. File that under ‘unintended consequences’.

And after looking at the kludges to avoid such consequences, concludes:

All that nice automatic recapitalisation we thought we were getting is now qualified by making the instrument more complex, or by invoking market restrictions, or by placing exacting requirements on where the conversion triggers are wired in.

Proponents of contingent convertible bonds, or CoCos, argue that they are effective instruments for bank recapitalisation. Sceptics argue that they introduce too much complexity, with potentially destabilising consequences. This column addresses this dispute empirically, using the dynamics of the CoCo market in 2016. The CoCo market at the time exhibited adverse dynamics that can’t be explained by banks’ fundamentals. Though some of this instability may have been transitory, the findings imply that the market should be monitored as it develops.

The Global Crisis highlighted a number of weaknesses in the banking sector. Excessive leverage, low liquidity buffers, and inadequate levels of capital were seen as the main sources of banks’ fragility. In response, policymakers approved the Basel III regulatory reforms to enhance banks’ resilience. On the capital side, regulation has been tightened by introducing higher requirements. Under Basel III, banks can meet a fraction of their Tier 1 capital requirement with hybrid debt-capital instruments, such as contingent convertible bonds (CoCos). These instruments allow for the recapitalisation of the bank as a going concern. A CoCo is in fact a perpetual security that pays a non-cumulative coupon and whose principal is automatically written down or converted into equity when its issuer’s CET1 ratio falls below a certain trigger.1 The privileged regulatory treatment – foreseen also by the transposition of Basel III standards in EU law, with the CRD IV and the CRR coming into force in January 2014 – has spurred the growth of the CoCos market in Europe. The volume of outstanding CoCos has risen from €33.8 billion in January 2014 to €107.4 billion in November 2016 (Figure 1). 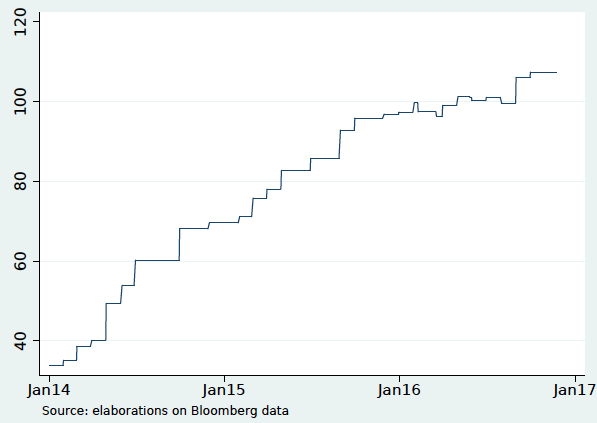 Supporters and Sceptics of CoCos

There is nevertheless a vivid debate on the convenience of allowing CoCos as capital instruments for regulatory purposes. CoCos’ supporters claim that their contingent debt-equity nature represents a plus – first, as debt instruments, they carry a lower issuing cost relative to common equity; second, as equity instruments, they provide a ‘pre-committed’ capital injection enabling the bank to strengthen its capital position precisely when raising equity would otherwise be difficult (e.g. Duffie 2009, Squam Lake Working Group 2009, Flannery 2016, Vallée 2016). Sceptics of CoCos in contrast argue against this double nature which – although theoretically appealing – introduces into practice too much complexity, with potential destabilising consequences on financial markets in the case of conversion (e.g. Goodhart 2010, Admati et al. 2013, Allen 2012).

In a recent paper, we use the CoCo market dynamics observed in 2016 to empirically address the question about whether these securities are effective instruments for bank recapitalisation (the supporters’ view) or if they are rather destabilising (the sceptics’ view) (Bologna et al. 2018).

Contagion in the CoCos’ Market?

The market of CoCos experienced two periods of significant turbulence in 2016. The first took place in January after the announcement of negative earnings expectations by Deutsche Bank, which came as a surprise for market participants. This period was accompanied by great uncertainty, as investors were concerned that the coupons on Deutsche Bank’s CoCos would not be paid. The second market distress event started in September 2016, when a number of articles in the press announced that Deutsche Bank had received a large fine by the US Department of Justice. During both events the yield-to-maturity of Deutsche Bank’s senior bonds and CoCos peaked to historical maxima. The CoCos issued by the most important European banks also experienced severe tensions, especially during the January episode when their average yield-to-maturity attained historical maxima (Figures 2 and 3). 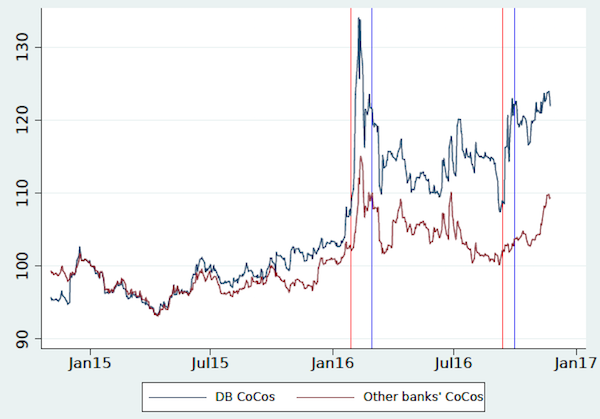 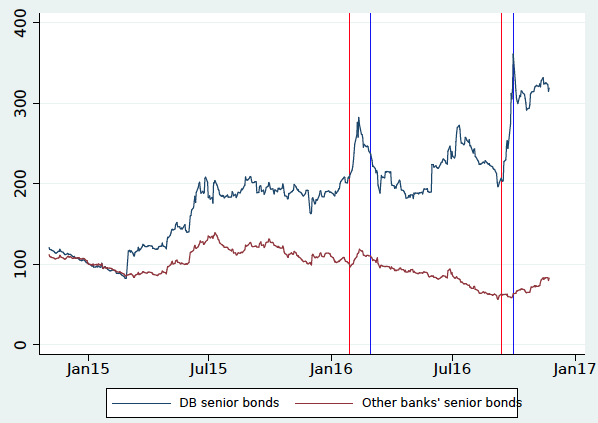 These market dynamics could have been the result of the contagion from a systemically important institution (as is Deutsche Bank) to other banks through ‘fundamental channels’ stemming, for instance, from the network of interbank exposures or the possibility of fire-sales. Yet, the overreaction of the CoCos market relative to the senior bonds market suggests that, in addition to possible fundamental distress propagation, the CoCos market could have been further destabilised by a sudden repricing of the risk of these instruments following the unexpected news about Deutsche Bank. Such a ‘CoCo-specific contagion’ constitutes the type of concern raised by the sceptics of these instruments and was frequently emphasised by informal commentators of these events.

Based on a large dataset on CoCo bonds issued by 22 major European banks between January 2014 and November 2016, we try to identify whether, on top of a ‘fundamental’ contagion channel, there is evidence of a ‘CoCo-specific’ one during the two above mentioned events (Bologna et al. 2018). For that purpose, we regress the daily yield-to-maturity of the CoCos issued by the European banks excluding Deutsche Bank on:

The first set of controls aims at capturing the extent to which the CoCos yield-to-maturity can be explained by the banks’ fundamental variables such as their solvency risk (proxied by the yield-to-maturity of the banks’ senior bonds) and their expected profitability (proxied by the banks’ stock return). These variables allow us to control for the fundamental contagion from Deutsche Bank during the two episodes, by capturing how such contagion may have affected CoCos prices. The second set of controls aims at identifying whether any interdependence between the CoCos of Deutsche Bank and those of other banks increased due to a CoCo-specific contagion when Deutsche Bank was under stress.

Our results show strong evidence about the existence of a CoCo-specific contagion channel in the distress propagation in both episodes, which supports CoCos sceptics’ claim that these instruments might be a source of financial instability when negative shocks occur. Moreover, we find that the behaviour of the CoCos issued by riskier banks does not significantly differ from that of CoCos issued by safer institutions, which further suggests the existence of non-fundamental factors affecting the CoCo market dynamics in both episodes. In addition, when comparing the CoCo-specific contagion between the two events, we find that its magnitude was significantly weaker during the September episode. We propose a tentative explanation of this finding considering two possibilities. First, this evidence could be the result of investors’ learning on the specificities of these products; second, the clarification after the January episode by the European Banking Authority and by the ECB with reference to the supervisory treatment of these instruments could have also played a stabilising role in the second distress episode.2

The motivation for allowing banks to also rely on CoCos to meet their regulatory capital requirements is that, while most of the time cheaper than common equity due to their debt features, they should, similarly to equity, provide loss-absorption capacity by enabling the ‘automatic recapitalisation’ of an institution when it is in distress. Our results show that, during 2016, the possibility that the coupon payment on the CoCos issued by a single bank might be suspended led to very adverse dynamics in the entire market for CoCos that cannot be totally explained by banks’ fundamentals. Although we find some evidence that part of the instability in the CoCo market could be transitory, authorities should keep on monitoring the development of this market and its behaviour under stress. The recapitalisation of the banks as a going concern provided by CoCos cannot be detrimental for the stability of the rest of the market. Should the operational features of CoCos keep on proving destabilising in future stress situations, rethinking their role as bank regulatory capital tools would be necessary.