This is Naked Capitalism fundraising week. 923 donors have already invested in our efforts to combat corruption and predatory conduct, particularly in the financial realm. Please join us and participate via our donation page, which shows how to give via check, credit card, debit card, or PayPal. Read about why we’re doing this fundraiser and what we’ve accomplished in the last year, and our current goal, thanking our guest bloggers.

It takes a lot of doing for a private equity firm to become insolvent, particularly if it has a good track record and is in the middle of raising a new fund. But Abraaj, a Dubai-based fund that was the darling of the Davos set and had attracted the bluest of blue-chip investors like the Bill and Melinda Gates Foundation and the Overseas Private Investment Corp. The Washington State Investment Board invested in Abraaj funds last year, which given the timetable means not long at all before the firm filed for insolvency.1 Similarly, in a sign of what passes for due diligence in private equity, consultant and supposed expert Hamilton Lane signed off on a $345 million investment last last year, less than nine months before the funds imploded, despite receiving an e-mailed warning about misuse of cash.

As the Wall Street Journal tells the story in an impressively detailed account, Abraaj’s Pakistani founder Arif Naqvi scored early successes in private equity investing. His first important deal, the 1999 purchase of the Middle Eastern grocery and liquor-retailing assets of Inchape, netted a $75.4 million profit on a $4.1 million equity investment. There was a warning of things to come in that Naqvi got in a dispute with his backers over what they should have gotten that was eventually settled out of court.

In 2002, Naqvi founded Abraaj with $116 million from wealthy Middle Eastern families. The fund initially did well, for instance, buying a $505 million interest in Middle Eastern investment bank EFG-Hermes and flipping it in a year for two times as much. Abraaj greatly expanded its network when it bought a London private equity firm, Aureos Capital, that had Western institutional investors as its limited partners.

Naqvi had been wooing elite investors with a pitch that he would make attractive returns while doing good by investing in low-income countries. One of his funds was to invest in city hospitals in Africa and Asia.

In addition to Naqvi networking at Davos and other exclusive social events, Abraaj also hired and engaged top names, such as Obama’s college roomie Wahid Hamid and Kito de Boer, a long-standing McKinsey director who had also served as Tony Blair’s successor as Middle East peace envoy. In 2017, Abraaj hired John Kerry to speak at its annual conference.2

By 2016, Abraaj had raised most of the funds for a $1 billion health care fund. From the Journal:

The fund invested in companies such as Pakistan’s Islamabad Diagnostic Centre and the hospital chain Quality Care India. The fund’s hospitals and clinics employed a total of 3,800 nurses at the start of this year.

Note the investments are sufficiently new that it is not clear whether they were panning out.

While the very detailed story can’t fully connect the dots of how the fund fell apart, there look to be at least two big causes of its cash crunch. One was that the sale of a major asset fell apart due to the Pakistan corruption scandal that engulfed former Prime Minster Nawaz Sharif. Abraaj owned part of K-Electric Ltd., Karachi’s electricity utility. Naqvi offered a $20 million bribe, erm, payment, to Navaid Malik to secure the support of Sharif and his brother for the deal, since the government was part owner and would have to bless any equity sale.

In 2016, Abraaj announced that Shanghai Electric Power Co. would buy its stake for $1.77 billion. But the approval was delayed and the deal was had not been consummated. Based on the timeline, Shariff’s removal as Prime Minister in July 2017 looks to have played a part.

A second contributor was that Naqvi was skimming funds from Abraaj. As the Journal explains:

Abraaj used investor funds for its own expenses, according to former executives and investors. The firm further muddied its finances with the “unusual practice” of borrowing money secured against its own stakes in its funds, creating “a highly unstable business model,” liquidators wrote in a report. Abraaj has defaulted on more than $1 billion of debt. 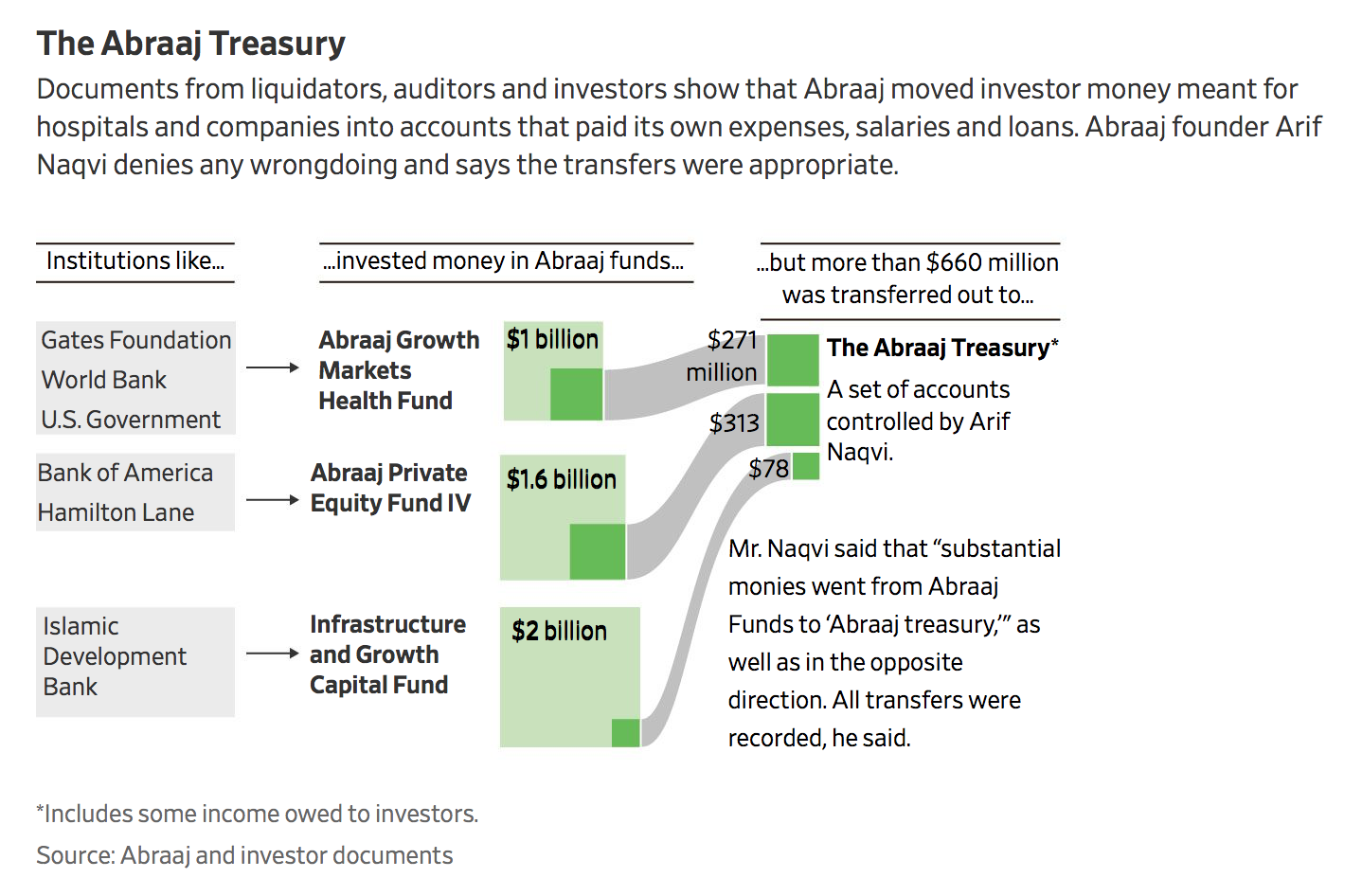 As investigators and investors dig further, more details are emerging that reveal the scope of the problems. At least $660 million of investor money was moved without the knowledge of most investors into bank accounts that forensic accountants call the Abraaj treasury, according to documents and people familiar with the situation.

More than $200 million flowed from those accounts to Mr. Naqvi and people close to him, according to company documents and people familiar with the situation.

In May 2017, after being asked to send payments to one of Mr. Naqvi’s sons and a company run by his former assistant, Abraaj finance executive Rafique Lakhani emailed his concerns about a “cash crunch” to Mr. Naqvi. He wrote: “The tension and stress is unbearable for me and it is affecting my health and my efficiency, and performance at work. I don’t know what else to say.”

The Bill and Melinda Gates Foundation was one of the investors that started suspecting something was amiss in 2017: 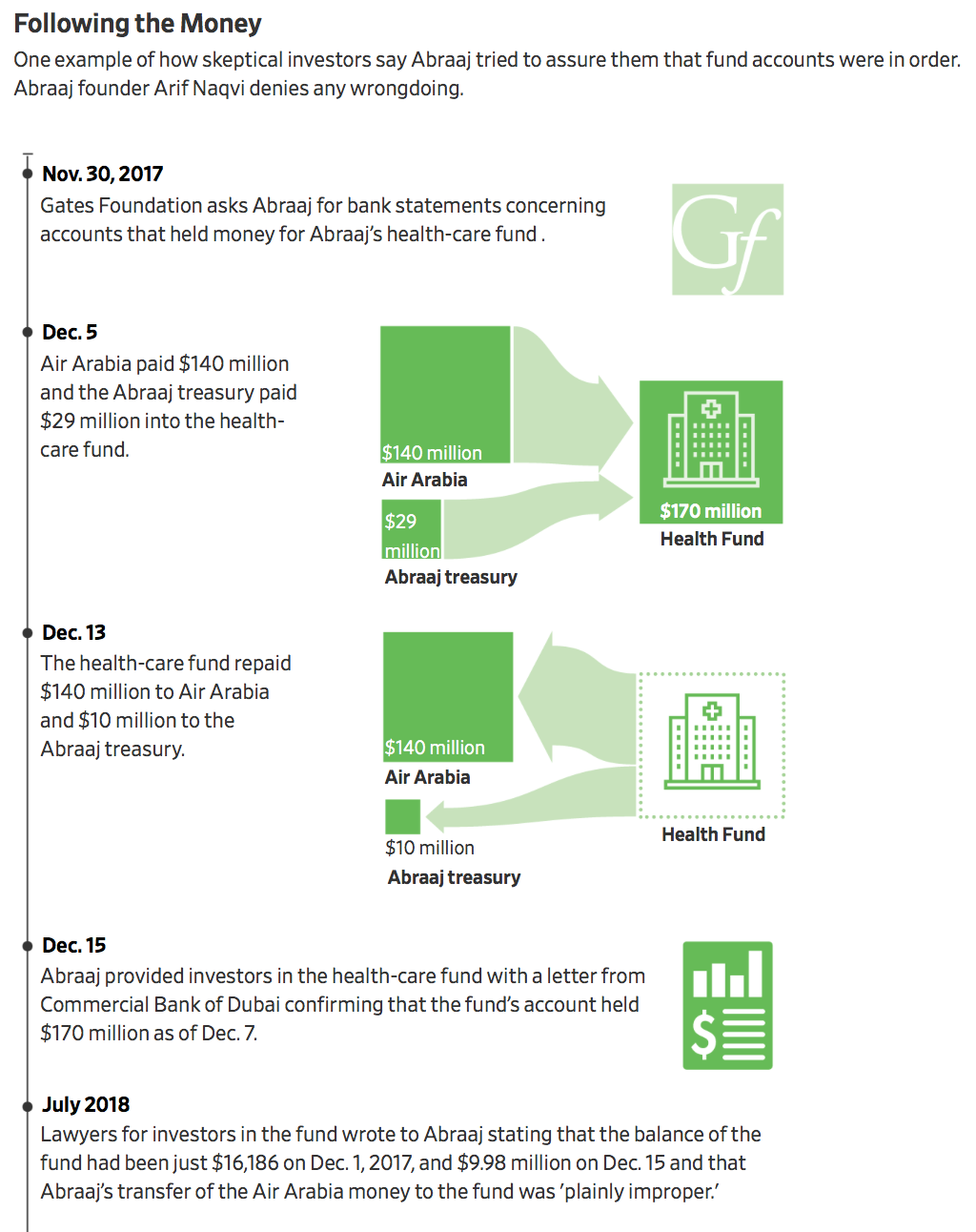 Naqvi of course denies vehemently that he did anything improper.

Oh, and let us not forget the due diligence failure of Hamilton Lane, a firm we’ve caught out treating due diligence as repackaging general partner marketing materials. Again from the Journal:

Hamilton Lane, a Pennsylvania-based firm that advises pension funds and other institutions on more than $400 billion in private-equity investments, persuaded its clients to invest at least $345 million with Abraaj last year—despite receiving an anonymous email on Sept. 23, 2017, urging against investing.

“Cash is used to fund the working capital,” the email said. “Get to the bottom of the Karachi electric story” and “don’t believe the slides and presentations,” it said.

Private equity is all about selling hope, and Abraaj offered a seductive twofer: participating in investing markets, which in theory can deliver great returns but too often leave investors holding the bag, and socially responsible investing, made even more attractive by helping impoverished populations. As this case unfolds, the public will get a better sense of when Naqvi started playing fast and loose with investor monies and when warning signs started appearing. Again from the Journal:

One former employee described Abraaj’s work as “inspirational capitalism at its most enlightened.”…

The collapse has led some investors to question whether Dubai’s regulatory environment is sufficiently safe—and privately, some worry it has damaged trust in the movement to use private capital to solve social problems in emerging markets.

The lesson may be simpler: if something sound too good to be true, it may well be and therefore warrants more inspection. Microlending also had a great following among the Davos set, grew to a $60 billion business that did not get people out of poverty and if anything, increased the amount of suicides in India. Or consider what happened in South Africa, per The Conversation:

South Africa saw a dramatic fall in average incomes in the informal economy – around 11% per year in real terms – from 1997-2003. This was brought about by two things:

What then happened was that the self-employment jobs created by the expansion of the informal sector were offset by the fall in average informal sector incomes. Increased competition softened prices and reduced turnover in each microenterprise as existing demand was simply shared out more widely. Poverty inevitably spiked.

In the meantime, the Wall Street Journal deserves kudos for this impressively researched story. I’m sure the Journal will provide more updates as the insolvency proceedings and related litigation move forward. If you can, do read the article in full for more juicy details.
____

1 Unless Middle Eastern funds run on very different lines than US and European funds, that means the Washington State Investment Board took more reputataional than financial damage. Private equity limited partners make commitments when a fund closes, but send money only when they get capital calls for specific deals. It is thus very probable that the SIB had sent well less than half of its committed capital.

2 The Journal finesses the issue of whether Kerry was paid, but big PE funds routinely pay top dollar for their annual conference “entertainment”. A guy at Kerry’s level would never do a gig like this for free.