This is Naked Capitalism fundraising week. 1586 donors have already invested in our efforts to combat corruption and predatory conduct, particularly in the financial realm. Please join us and participate via our donation page, which shows how to give via check, credit card, debit card, or PayPal. Read about why we’re doing this fundraiser and what we’ve accomplished in the last year, and our current goal, more original reporting

Recall that the global financial crisis, the Great Depression and the Asian market crisis, to name a few, all were nasty events because they were credit contractions that threatened to or actually did impair banks and the payment system. So even though stock market train wrecks are very dramatic, unless they do damage to banks or to quasi banks that collectively provide a lot of essential lending, the real economy impact will be limited. Admittedly, China’s stock markets allow investors to margin their shares heavily, so there could be blowback from a stock market bust.

As we’ll discuss a bit more, the market plunge at the end of the US trading day got some pros panicked, to the degree that if the selling picks up again tomorrow, it could feed on itself.

Yet even though, as headlines blared, the selloff in October wiped out the gains for the S&P 500 and the Dow for the year, they’re still up over the last 12 months. And the wave of selling continued overseas. The Nikkei fell 3.7%. China’s CSI 300 was off by as much as 2.8%. As of this writing, the FTSE was down by 1.5% and the Dax by over 2.6%. US futures are up but the US markets were in and out of positive territory yesterday before taking their swan dive. And with 80 companies reporting earnings today, fund managers will have a lot to digest. 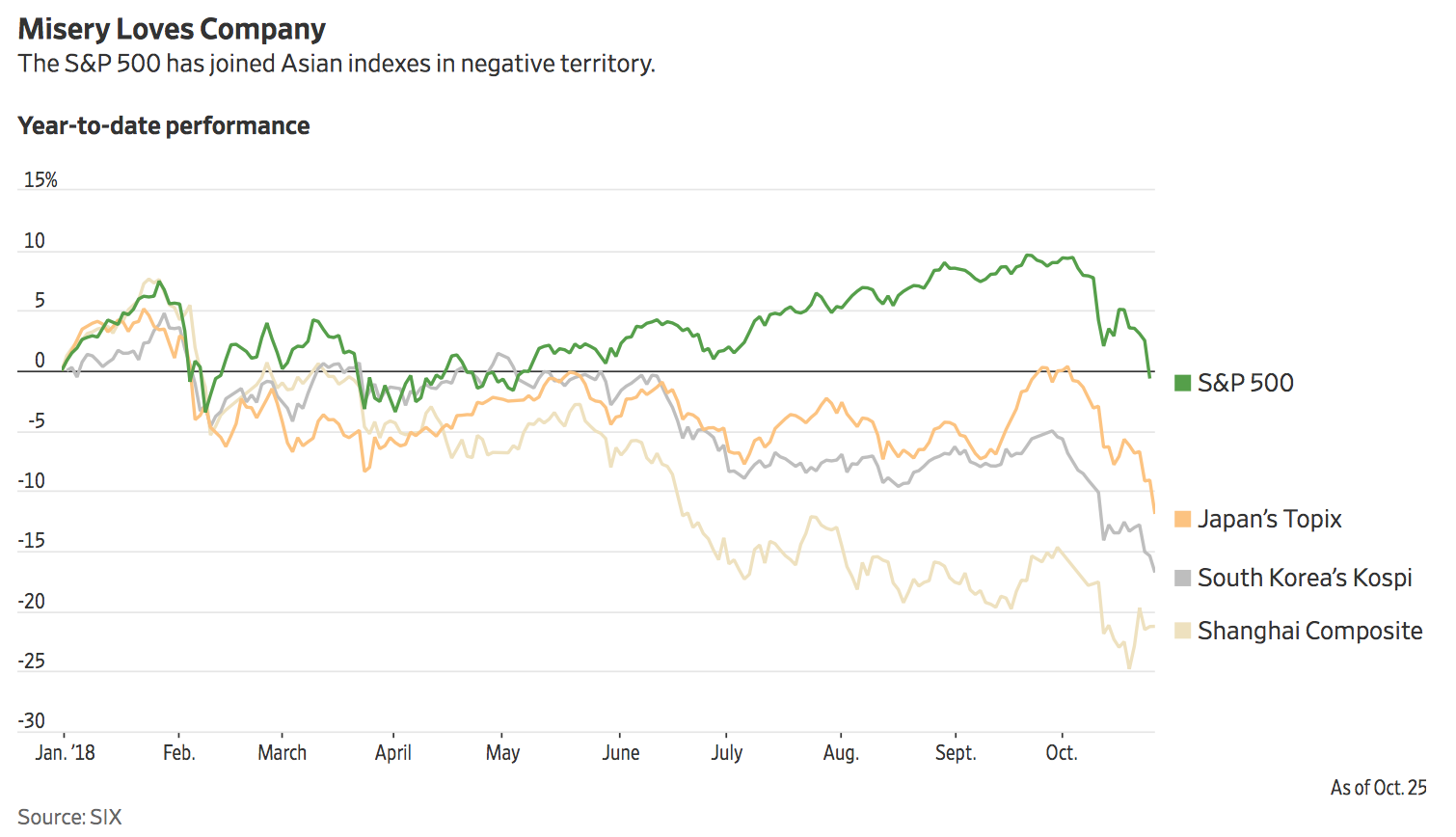 If the US stock market continues to be sloppy or worse today, it might have more significance that it would normally due to the proximity to the midterms and the importance of the stock market to Republicans. One of the reasons Trump voters regularly cite for why they still approve of him is that their personal portfolios are up significantly. An October wipeout would dent that satisfaction.

In terms of “why?” who knows? Yale economist Robert Shiller claims there was no reason for the 1987 crash, although the Brady Commission begged to differ (they saw a proposed rule change by Treasury to make the tax treatment of highly leveraged transactions, as well as some weak Treasury bond sales, as triggers). It would seem a broad revaluation is overdue as central banks are trying to engineer a way out of the protracted post crisis new normal of super low interest rates. Super low interest rates, as we’ve seen for years, goose asset prices because future cash flows are discounted at a low rate. Increase the discount rate and everything is worth less. So if you believe that the Fed really is going to keep increasing interest rates, even in a very measured way, it means that earning multiples will fall. And even if the ECB and Bank of Japan don’t seem as bloody-minded, they aren’t in the monetary stimulus game right now.

But what seems to have focused investors’ minds are trade tensions, which threaten global supply chains and creates all sorts of uncertainties as to how much particular companies might be hurt, and some negative earnings surprises, not all of which are due to tariff-related hits.

Some snippets on the rattled nerves, first from the Financial Times:

“It’s super-ugly, and who knows when it will be over,” said Adam Sender, chief investment officer of Sender Company and Partners, an investment group. “I’m very defensively positioned.”…

“There are a multitude of reasons why markets came down in early October, but everyone said it would be OK because US corporate earnings would prop them up,” said Kerry Craig, a global market strategist at JPMorgan Asset Management. “But they have not been as strong as expected — cracks are appearing in earnings.”

Against a backdrop of rising interest rates and growing trade tensions, a feeling that the best days of the economic cycle were in the past was taking hold, fed by the results of bellwether industrial companies such as Caterpillar and 3M this week.

“That is definitely the fear — that we are at peak earnings,” said Max Gokhman, head of asset allocation for Pacific Life Fund Advisors.

Investors have been grappling with a range of uncertainties this month, including rising interest rates, concerns that earnings might have peaked and the possibility that rising trade tensions have weakened Chinese and global economic growth…

Some investors have also apparently lost conviction that a strong economy in the U.S. was enough to insulate it from gloom elsewhere.

“It seems like people are finally coming to a point where they are questioning if the U.S. is very different from global markets,” said Felix Lam, a portfolio manager at BNP Paribas Asset Management. “We are still quite globally linked,” he said, adding that trade tensions will ultimately affect the U.S. as well.

“The fear is palpable in stock markets at the moment,” Greg McKenna, a markets strategist at McKenna Macro, wrote in a note Thursday. “When folks are struggling to explain the driver of a move that means an obvious circuit breaker is also not in evidence. So this could get much worse before it gets better. Collapses happen after falls. That’s the danger.”

Now having given all that gloomy talk, Bloomberg’s headlines depicted European markets as stabilizing and pointed out that US futures are up. So yesterday’s action could prove to be a case of jitters that Mr. Market shakes off today. But technical maven Jesse thinks the trajectory is baked in:

The decline in the equity markets was very real today, although there was a distinct lack of tangible fear amongst the wiseguys. Although the professional cheerleaders and spokesmodels were uncharacteristically at a loss for words and rationalizations, being suitably confused by the selling— homina homina homina…

We will likely see some bouncing around since we are still in monetary la la land. But the handwriting is clearly on the wall.

I mean I even labeled these ‘blow off tops’ pretty much in near real time. I added a ‘ding ding ding’ to the big cap tech chart in case you missed the hint. Sometimes they do ring a bell, right?…

There may be some bright moments ahead. There always are.

But things are probably going to get worse, and maybe a lot worse if we continue to be stiff-necked, easily manipulated, and refuse to reform. History does not hold out much hope if we do not.

I just wish there were not so many innocents in the blast radius of this madness.

Markets aren’t terribly rational, so your guess is as good as mine.

Update 2:00 PM: Even though US stocks are on the mend, investors are sulking that the Fed didn’t run to their aid. The Wall Street Journal has only a smallish headline, Stocks Gain After Rout, above the fold now; you have to look to the right to their little “Markets” chart to see that the Dow is now up 1.46% and the S&P 500, 1.7%. From Bloomberg:

Besieged global investors swimming in a sea of red are consumed with one magic number: the strike price of the so-called Powell Put — or how much more blood stock markets need to shed before spurring the Federal Reserve to temper its hiking plan.

For now, a chorus of Wall Street voices say the $2 trillion tumble in U.S. equities this month has yet to tighten financial conditions to levels that would spark a dovish monetary offset. That’s even as traders in eurodollar markets lower wagers on interest-rate increases next year….

And the Fed is of our view: wake me when there’s a credit market issue:

The market rout has yet to inflict much pain on corporate bonds, a key component of financial conditions monitored by central bankers. The spread of junk bonds over investment grade corporate credit has narrowed about 14 basis points this year….

“He tackled it twice — first by pointing out that market valuations are at the higher end of historic ranges, and from that perspective a correction would not be unusual,” the Hong Kong-based investor said. “Second, after a repeat question on the topic, he stated that the Fed looks at secondary effects and the nature of corrections.”

The S&P 500 has returned about 35 percent since the Fed began its tightening cycle in December 2015.