Yves here. It’s too easy to assume that if someone is behaving badly, the party opposed to him must be a good guy. Yanis Varoufakis argues that in the fight over the Italian budget, Brussels and the Italian government are serving their own interests rather than trying to increase citizen’s prosperity. He describes how economically, even though the EU fiscal rules are deeply misguided and destructive, Italy’s budget has misguided priorities and won’t boost the economy much. So the Italian debt overhang would probably get worse, confirming the Eurocrat’s claims that deficit spending is a bad idea.

By Yanis Varoufakis,  the former finance minister of Greece, Professor of Economics at the University of Athens, Visiting Professor at the Lyndon B. Johnson Graduate School of Public Affairs, University of Texas, Austin and co-founder of DiEM25. He is the author of Adults in the Room: My Battle with Europe’s Deep Establishment. (Bodley Head, 2017) and Talking to My Daughter About the Economy: A Brief History of Capitalism (Bodley Head, 2017).  Originally published at his website

Ladies and Gentlemen, we are here because Italy is being torn by two destructive forces: Brussels and Salvini. By the failed establishment of Renzi-Merkel-Juncker-Moscovici and by the reckless, racist anti-European Salvini project.

Tragically, Brussels and Salvini are working very well together against the interests of Italians in particular and of Europeans in general.

On the Italian Government Budget

Both Brussels and the Lega-5S government are profoundly, and intentionally, wrong.

Even worse, both Brussels and the Lega-5S government know that they are profoundly wrong. Brussels is choosing to be wrong because they are more interested in maintaining a semblance of control over our countries than they are in shared prosperity across Europe. And the Lega-5S government is choosing to be wrong because Salvini and Di Maio are more interested in maintaining their precarious alliance that in the prosperity of the Italian people.

Italy stagnates because its centrist establishment agreed to EU rules that choked Italy, causing its own political demise and paving the ground for Salvini.

We Must Act. Now!

Italy has an urgent need for a new progressive alternative to the implicit but destructive alliance between the oligarchic establishment and Salvini’s nationalism.

Italy, however, does notneed yet another sad leftist alliance of the usual suspects. Italy does not need another Frankenstein list that stitches together dead parts of what used to be Italy’s glorious left. The last thing Italians need is another list of leftist candidates lacking a coherent program of change and united only by a desperation to get elected on the basis of vague promises, wishful thinking and high-minded rhetoric.

No, what Italian voters need, and deserve, is a progressive list with a single, coherent, credible program that everyone agrees has genuine, implementable answers to the problems keeping people up at night and making them fear for their children, for their future, for the future of Italy and Europe.

This is why we are here today. To announce such a list and such a single, coherent, credible program.

Last March, colleagues from DiEM25, myself, comrades from Poland, Denmark, Portugal, Benoit Hamon from France, we met in Napoli under the auspices of my friend Luigi de Magistris, Napoli’s Mayor, and announced that we are beginning. That we are constructing a single paneuropean list with a single program for Italy, for Greece, for France, for the whole of Europe – a program that we will put to the people of Europe in May 2019 in the European Parliament elections. This program is now complete, after many months of very hard work. It is the progressive, ecological, feminist, humanist, rational program of the paneuropean coalition that we now call EUROPEAN SPRING.

What Do We Propose viz. the Italian Budget?

What Do We Propose for the European Union?

DiEM25 has helped produce the EUROPEAN SPRING’s comprehensive New Deal for Europe program that we shall present it to European voters across Europe in May 2019. 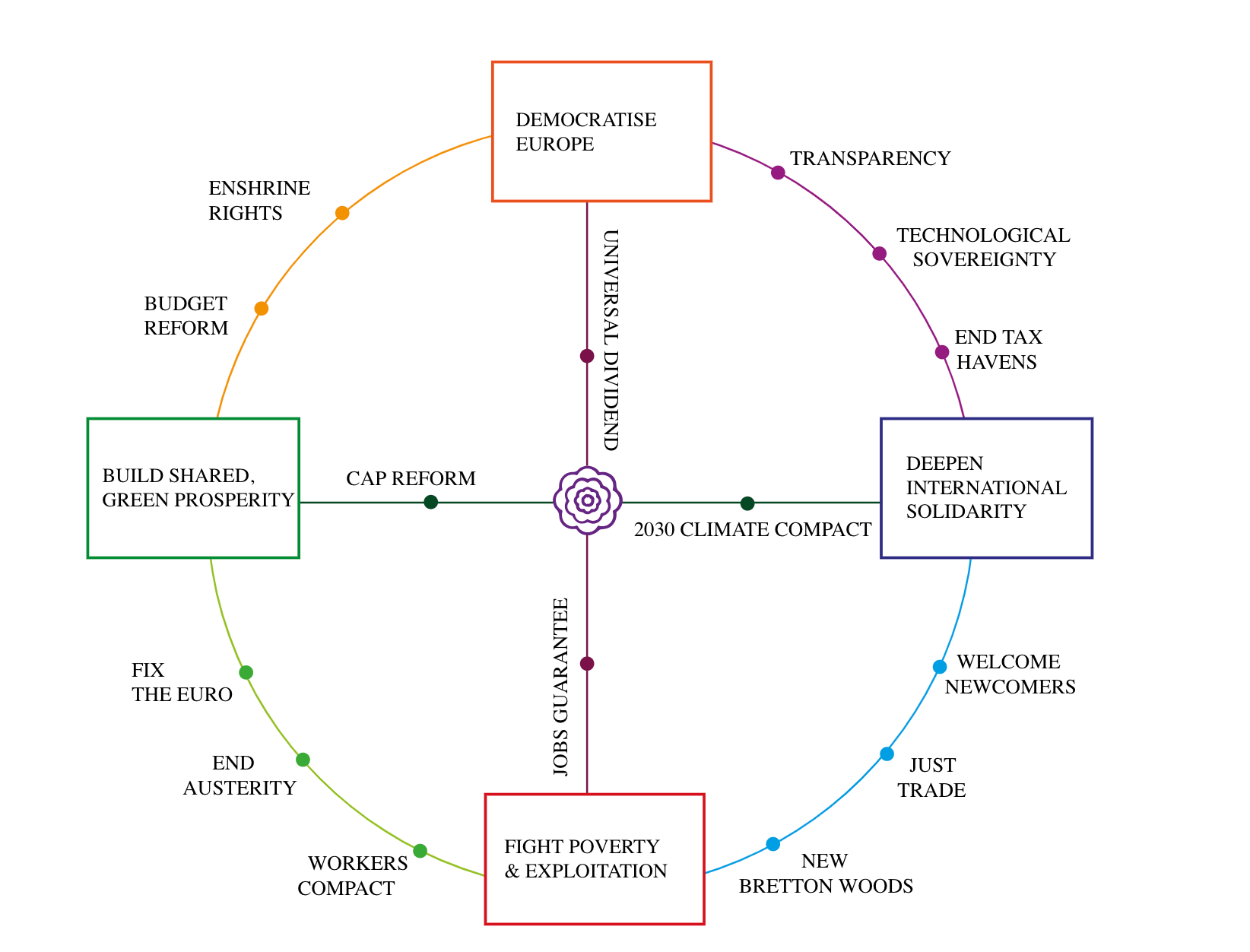 Austerity for the many and socialism for the bankers has given rise to the present Fascist Moment in Italy, to the collapse of the political centre everywhere, to the reactionary, divided Europe that Donald Trump was hoping for.

Today, here in Rome, we are saying: Enough! We are saying: Another Italy, another Europe, is not only possible. It is here in the form of our transnational movement with a SINGLE COHERENT PROGRAM that people can believe in – because it makes sense and because it can be implemented.

Today, we are here to announce that DiEM25 is moving ahead on the basis of the only rational plan for Italy, the only rational plan for Europe. The Brussels-Salvini duet is wasting no time to wreck Italy, to disintegrate Europe. There is no more time to wait for our partners to complete never-ending internal deliberations. So, DiEM25 is moving ahead.

During November we will stage three large events across Italy to announce our list and begin our primaries. By 1stDecember we shall begin collecting the signatures necessary to contest the May 2019 European Parliament election.

The DiEM25 Italia train is leaving the station, slowly and with its doors wide open for our partners to jump in. We invite them to do so.

The European Parliament elections are only a start. They give us an opportunity to have this debate. We shall use the May elections to transcend the fake conflict between Brussels and Salvini, between the authoritarian incompetent establishment and the misanthropic Nationalist International.

DiEM25 Italia is here. With an economic agenda. But also as a political force.

We are here to bring to the people of Italy a scent of next May’s European Spring.

Italian progressives are no longer alone.