Patient readers, I am finishing up a post on the California wildfires, so talk amongst yourselves. –lambert

But here’s a conversation starter, since the 2020 campaign season has already begun:

Penn, a frequent contributor to The Hill, co-wrote a Sunday op-ed for The Wall Street Journal with Andrew Stein, a former Democratic Manhattan borough president and president of the New York City Council. (Stein is the brother of James Finkelstein, chairman and CEO of The Hill.)

“You can expect her to run for president once again,” [Penn and Stein] predicted. “Maybe not at first, when the legions of Senate Democrats make their announcements, but definitely by the time the primaries are in full swing.”

“She has decisively to win those Iowa caucus-goers who have never warmed up to her,” they wrote. “They will see her now as strong, partisan, left-leaning and all-Democrat—the one with the guts, experience and steely-eyed determination to defeat Mr. Trump.”

“Mrs. Clinton knows both Mr. Clinton and Mr. Obama declared they weren’t running, until they ran,” the pair argued. “She may even skip Iowa and enter the race later, but rest assured that, one way or another, Hillary 4.0 is on the way.”

It is true that Clinton hasn’t made anything like a Sherman statement. It is also true that the Clinton camp has never accepted they were defeated in 2016, and she’s still surrounded by the same people, whose sycophancy and lack af ability to self-reflect is notable. It’s also true that in the event of a deadlocked convention, the superdelegates could play a decisive role on her behalf, as they did in 2016. Finally, Clinton’s base is still extremely influential in the party (rebranded as Indivisible, etc.). One barrier: It’s not clear to me she could fundraise at the same level. Personally, I think the idea of Clinton running again is so crazypants it can’t possibly come to anything. Penn has been peddling this line for some time (ka-ching). Clinton needs to sell tickets and books (ka-ching). But stranger things have happened, as we know. And she’s only 71….

Readers, feel free to contact me at lambert [UNDERSCORE] strether [DOT] corrente [AT] yahoo [DOT] com, with (a) links, and even better (b) sources I should curate regularly, (c) how to send me a check if you are allergic to PayPal, and (d) to find out how to send me images of plants. Vegetables are fine! Fungi are deemed to be honorary plants! If you want your handle to appear as a credit, please place it at the start of your mail in parentheses: (thus). Otherwise, I will anonymize by using your initials. See the previous Water Cooler (with plant) here. Today’s plant (EM): 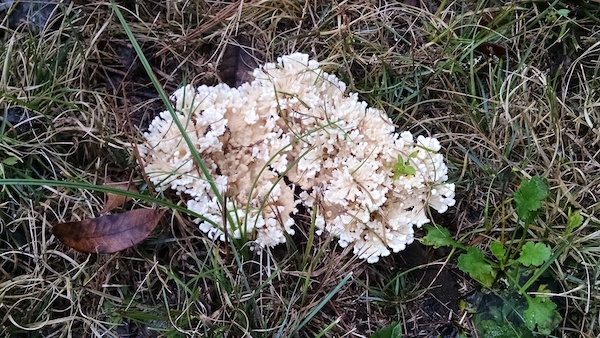 A coral mushroom. Apparently some are edible, but proper identification is key!

Readers: Water Cooler is a standalone entity not covered by the annual NC fundraiser, now completed. So do feel free to make a contribution today or any day. Here is why: Regular positive feedback both makes me feel good and lets me know I’m on the right track with coverage. When I get no donations for five or ten days I get worried. More tangibly, a constant trickle of small donations helps me with expenses, and I factor that trickle in when setting fundraising goals. So if you see something you especially appreciate, do feel free to click below! (The hat is temporarily defunct, so I slapped in some old code.)