CalPERS is engaging in yet another one of its Big Lies,1 this time in calling what can at best be called an astroturf show of support for embattled CEO Marcie Frost genuine. As you’ll see from the image below, CalPERS employees are being exhorted to don burgundy ribbons to demonstrate that they back CEO Marcie Frost.

As to the claim that no one is under pressure to wear the ribbons, let me turn the mike over to the employee who told me about this boneheaded idea:

Now executives are making employees wear badges to show if they support Marcie or not!!! These are in every break room at CalPERS!!! They say participation isn’t mandatory but you know they’re making note of who is wearing them and who isn’t.

Readers, you tell me:

Do you believe that participation is voluntary?

Can you ever think of an instance of a CEO feeling it necessary to go to such bizarre lengths to pretend that she has the backing of the rank and file?

Now it is conceivable that one of Frost’s direct reports came up with this idea originally. But even this best case does not reflect well on Frost. First, she has to have known that others would participate whether or not they still had confidence in her out of fear of standing out and making themselves a target for retribution. And that fear would be well founded. Former senior individuals who worked for Frost in Washington for many years reported that she would scapegoat and publicly humiliate employees. Second, the apparent need for visible support suggests that Frost is so emotionally fragile that she can’t take the heat of the position she has put herself in via her history of fabrications and even perjury. Third, it should have occurred to Frost and her toadies erstwhile fans that this move would create resentment among those that were already upset at the lack of leadership shown by CalPERS’ board by its refusal to investigate Frost and clear her name. Their refusal to do so lends credence to the idea that the notion that Frost has made misrepresentations for years is true.

The closest thing I can think of is the famed Potemkin villages. Per Wikipedia:

The term comes from stories of a fake portable village built solely to impress Empress Catherine II by her former lover Grigory Potemkin during her journey to Crimea in 1787…..the original story was that Potemkin erected phony portable settlements along the banks of the Dnieper River in order to impress the Russian Empress; the structures would be disassembled after she passed, and re-assembled farther along her route to be viewed again as if another example.

But at least historians now believe that the stories about Potemikin villages were exaggerated, while we see the evidence of faked-up support below. And if you think this gimmick was organic, think again. Frost has orchestrated external astroturf support to try to combat fully deserved criticism for misrepresentations she made during the hiring process and after she joined CalPERS. From a September post:

CalPERS CEO Marcie Frost has been waging a concerted battle to keep her job after we documented multiple misrepresentations she made during and after she was hired at CalPERS, as well as misrepresentations made in her own handwriting on a 2013 form filed under penalty of perjury in the state of Washington. As Los Angeles Times reporter Mike Hiltzik stressed last week, even executives with long, celebrated careers have lost their jobs over resume lies.

In another sign of questionable leadership, Frost has been reactive when her own professional survival is at stake. As we’ll discuss below, Frost has been personally soliciting letters of support from organizations that are close to CalPERS. The fact that I am hearing about it at my considerable remove says people see this behavior as crass. In addition, a union leader issued a letter of support for Frost on behalf of other unions, when at least one was not consulted and not happy about that.

This childish effort is a sign that Frost is desperate and needs positive reinforcement from her immediate environment to maintain what looks to be a tenuous hold on authority. The fact that this push for employees to wear ribbon more than two months after the scandal broke, on the first day of the monthly two and a half day board meetings, also suggests that she or her key staffers suspect that Frost is still in a rocky position with the board. And the note pumping for the ribbon show is a diss to State Treasurer John Chiang, by pretending that his request for an independent investigation of Frost’s claims before and after she was hired didn’t exist.

Calling the new private equity scheme CalPERS Direct when it is not direct investing and CalPERS staff admitted today it would be a garden variety general partner, begging the question of why CalPERS was taking additional cost and risk as opposed to just setting up a separately managed account with an existing GP.

Having spokesman Wayne Davis claim he was responsible for Frost’s resume misrepresentations, which has been debunked by the Financial Times, the Los Angeles Times’ Mike Hitzik, and former board member George Diehr, among others.

CalPERS saying no one could get private equity carry fee information.

Frost defending then CFO Charles Asubonten as an “excellent candidate” even after we had documented extensive misrepresentations on his resume and Form 700. He was dismissed by CalPERS shortly after they finally felt pressured enough to investigate. 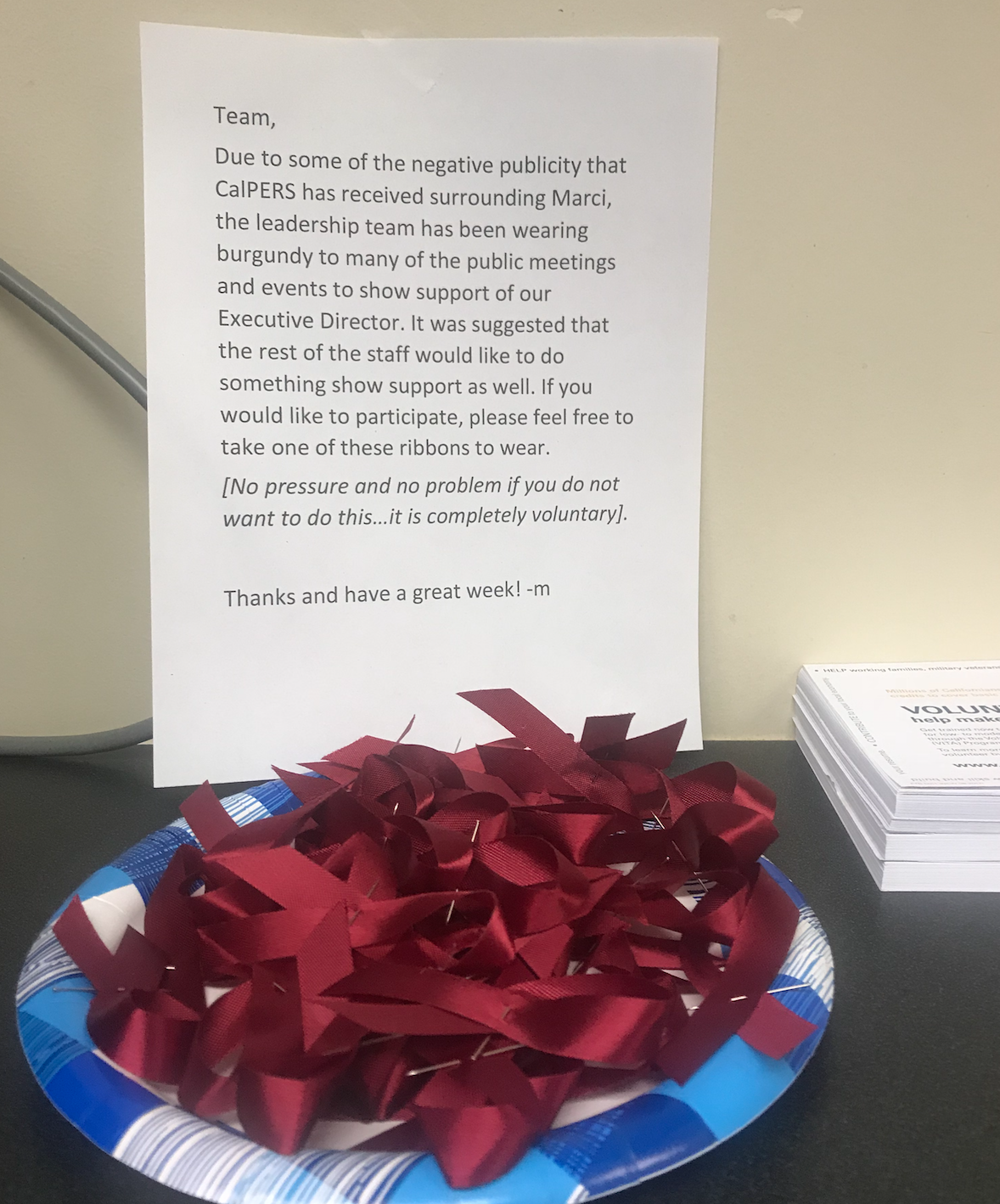