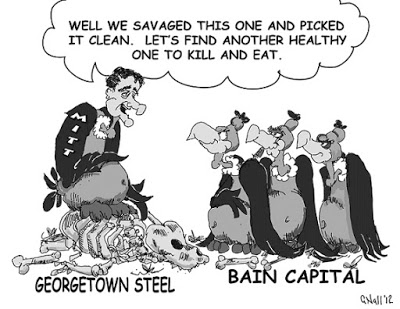 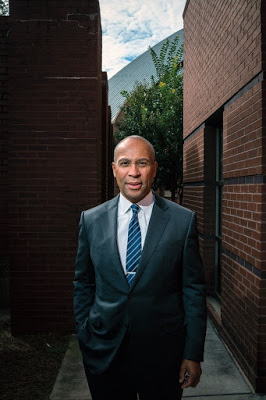 Bain Capital’s managing director and the Obama circle’s choice for next president. “We get the government we deserve in a democracy,” Deval Patrick unironically said, according to the original caption (Photograph by John Trotter/MAPS for The New Yorker).

Yet another agent of wealth is being touted as a Democratic Party candidate for president — it seems there’s no end of them. This time the candidate is no Mike Bloomberg, with his suspect past, his narcissistic sense of entitlement, and openly limousine lifestyle, but an under-the-radar Democratic governor named Deval Patrick.

Patrick ticks all the boxes. He’s loved by the Obama organization, he has that next-Obama feel on the stump, and he’s a “moderate” (meaning corporatist) in a year when Third Way organizations are searching hard for a “sounds progressive, serves the donors” candidate to throw against the Donald Trump or Mike Pence wall in 2020.

And now he has the the big New York media pushing his candidacy, firing his big opening salvos for him. Jeffrey Toobin, not a no-name writer, has an absolutely glowing piece about Patrick in The New Yorker. Let’s take a look (emphasis mine throughout):

On Election Night last week, Deval Patrick, the former governor of Massachusetts, went out to dinner with his wife, Diane, near their apartment, in Boston’s Back Bay. They propped up their iPads on the table, trying to synchronize their schedules after a hectic couple of months. On weekdays, Patrick had been on the road for his job, as a managing director at Bain Capital, the investment firm founded by his predecessor as governor, Mitt Romney. On weekends, he had travelled to a dozen states, to campaign for Democratic candidates in the midterms, and, in the process, to generate the kind of good will and name recognition that could help him if he chooses to run for President in 2020. Diane, meanwhile, had been winding down her law practice, as a management-side labor lawyer at the major Boston firm Ropes & Gray, where she had recently given up her partnership after working there since 1995. Back at home, after dinner, Patrick took a quick look at the election results, and then turned in early, rising, as is his custom, at dawn, to take stock.

Notice, among the down home details of this warm portrait, these critical facts: Deval Patrick is managing director of Bain Capital. His wife Diane is a labor lawyer, but on the management side, meaning she helps corporations fend off unions.

Toobin clearly doesn’t see any of that as a minus, but he should. Bain Capital, worth nearly $100 billion in privately held assets, is an acquirer and destroyer of companies:

In his 2009 book The Buyout of America: How Private Equity Is Destroying Jobs and Killing the American Economy, Josh Kosman described Bain Capital as “notorious for its failure to plow profits back into its businesses,” being the first large private-equity firm to derive a large fraction of its revenues from corporate dividends and other distributions. The revenue potential of this strategy, which may “starve” a company of capital, was increased by a 1970s court ruling that allowed companies to consider the entire fair-market value of the company, instead of only their “hard assets”, in determining how much money was available to pay dividends. In at least some instances, companies acquired by Bain borrowed money in order to increase their dividend payments, ultimately leading to the collapse of what had been financially stable businesses.

A classic “leveraged buyout” company, a vulture capital operation. Here’s what Bain did to Toys ‘R’ Us in 2018:

Just a few years ago, Toys ‘R’ Us was an iconic American retailer. Six months ago, it filed for bankruptcy. Two days ago, it announced that all 800 of its American stores, and all 100 of its British ones, are closing or being sold. As many as 33,000 workers could lose their jobs.

One of those vultures was Bain Capital. Deval Patrick was its managing director, the man in charge, when this occurred.

So why is Jeffrey Toobin writing about him? Maybe because Patrick is much loved by the Obama inner circle:

Patrick would enter the race with one significant distinction: he is a kind of political heir to Barack Obama, and enjoys broad support from people close to the former President. Valerie Jarrett, Obama’s former senior adviser and still a close friend, told me, “Deval would make an outstanding President. He’d make a terrific candidate.” She added, “President Obama and Deval are very much alike in terms of their core values, what drove them into public service, their willingness to lend a hand, the responsibility to give back. I think they share a basic philosophy about what it means to be a good citizen.” Obama and Patrick also have in common roots in Chicago, Ivy League educations, and complicated relationships with largely absent fathers (which both men have chronicled in memoirs that feature youthful pilgrimages to Africa). They espouse a politics of unapologetic idealism, with a largely moderate, center-left orientation. On the stump, both are part teacher and part preacher. “Deval is a very genuine person, a very empathetic person,” David Axelrod, who has been a strategist for Patrickas well as for Obama, told me. “He is a guy who makes people feel comfortable. He’s very principled, you can see that—just like Obama.”

Ignore the adoring prose layered into that paragraph — “They [Obama and Patrick] espouse a politics of unapologetic idealism, with a largely moderate, center-left orientation. On the stump, both are part teacher and part preacher” — and focus on the endorsements. Patrick’s “unapologetic idealism” is just not true; both Obama and Patrick are corporatists who serve wealth first. Being “part teacher and part preacher” just means he, like Obama, is a good Elmer Gantry.

As for Patrick being “principled,” indeed he is; he’s principled “just like Obama,” though I’m sure Toobin doesn’t mean this as ironically it sounds to any real student of Obama.

Most of the piece is like that — painfully praising, and painfully revealing in a way unintended by Toobin. For example, here’s Toobin on why Patrick was opposed to Brett Kavanaugh’s nomination:

That afternoon, Patrick and I sat down at a diner in Asbury Park. In Washington, Brett Kavanaugh was being confirmed as a Justice of the Supreme Court, and Patrick explained his opposition to the nomination. “Some of it is very personal,” he said. … In 1993, Patrick’s brother-in-law was convicted of raping Patrick’s sister, and Diane has talked openly about being a victim of domestic abuse during her first marriage. “I can confirm that the experience of not being believed or having the experience not taken as seriously or treated as seriously is extremely painful,” he said. He spoke with sorrow and emotional distance, and [Toobin couldn’t bring himself to write “but”], notably, didn’t denounce Kavanaugh directly, or Trump for choosing him.

Note in this passage the compelling verbal portrait of a man whose sister had been raped, speaking “with sorrow and emotional distance,” followed immediately by the lack of condemnation of either the rapist, the radical who nominated him, nor the destructive agenda the Kavanaugh court will enact. Toobin’s personal access to Patrick (“That afternoon, Patrick and I sat down at a diner in Asbury Park”), his front-and-center self-placement as the writer picked to roll out Valerie Jarrett’s front-runner, also stands out. The piece is a paint job, and deaf to its ironies.

None of this means that Patrick won’t be a force to be reckoned with in 2020. Both Toobin and David Axelrod attest to Patrick’s preacher power on the stump. Toobin: “Soon after Patrick started to campaign, Axelrod got a phone call from his sister Joan, who lives in Massachusetts … “She had never done anything like this before, but she gets on the phone and says she’s just met Deval and he is incredible. ‘He’s the real deal. You have to come here and work for him.’” … Patrick beat Reilly by twenty points in the primary.”

As a sleeper, Patrick is well positioned to surprise. Be prepared to find him in the running as the race evolves, with both money and power behind him and yes-we-can media angels at his shoulder.

“It struck me that something is so wrong when we learn to shout our anger and whisper our kindness,” he went on. “We have got to learn to stop being ashamed of being kind.” In the church and elsewhere, Patrick left a message of hope and kindness. The question, for Patrick and everyone else, is whether there is a wider audience for it in this fierce and broken political moment.

Is there a place for “hope and kindness” in this “fierce and broken moment”? Let’s ask the broken employees of Toys ‘R’ Us before seeking kindness from Deval Patrick, their destroyer.