Yves here. Another reason to push for higher minimum wages. And someone needs to clue in conservatives that their alternatives are not so hot. Fewer people are interested in becoming cops due to news coverage of police brutality.

Individuals with a criminal record face difficulties in the labour market that can compel them to reoffend. This column reveals how increases in the minimum wage in the US reduce the likelihood of recently released felons being reincarcerated, while an income-related tax subsidy has a similar effect for women, but not men. The results suggest significant welfare benefits from policiesthat help raise wages above the potential income from criminal activity.

The 10,000 people released from prison each week in the US face the stigma of a criminal record and limited job opportunities, as well as a set of public policies that are largely stacked against them (Pager 2003, Agan and Starr 2018). The net result is that more than a third of released prisoners are re-incarcerated within three years, which is our definition of recidivism for this study (Yang 2017). Policy efforts targeted at supporting people with records and their reintegration into the workforce to shift this balance have had mixed results. While targeted policies have had limited success, however, research has demonstrated that strong labour markets lead to considerably lower rates of re-incarceration (Yang 2017, Schnepel 2017, Galbiati et al. 2018). This raises the question: can broad labour market policies help to mitigate the deleterious effects of a criminal record?

Minimum Wages and the EITC

The minimum wage is arguably the most prominent (and studied) labour policy in the US. Identifying and measuring any changes in unemployment from minimum wages has kept economists busy for decades. The literature in question has largely focused on the demand-side of the equation – does employer demand for low-skill labour decline in the face of minimum wages? For individuals with a criminal record, however, an increase in participation in the legal labour market has potentially important public consequences – a higher return to legal jobs may correspond to a lower supply of illegal labour, i.e. crime.

While minimum wages may be the most prominent, they are not the only policy designed to support lower wage earners. The Earned Income Tax Credit (EITC) is a federal wage subsidy for low-wage workers. Twenty-six states have piggy-backed onto the federal credit, supplementing it with a state ‘top-up’. These policies should, in theory, not suffer from the potential negative employment effects inherent to minimum wages. EITCs suffer from a different set of potential problems: policy specificity and access. The benefits of the EITC, as it is currently designed, primarily accrue to individuals with legal custody of dependent children. For men recently released from prison, this more often than not precludes them from benefiting.

There stands to be potential benefits for released prisoners from the minimum wage and EITC. If market wages for those with criminal records are inferior to income generated from criminal endeavours, then higher minimum wages might pull men and women into the legal labour market and reduce rates of recidivism. On the other hand, higher minimum wages may make employment harder to find for people with records in particular, which could exacerbate recidivism further. The EITC, by supplementing incomes and encouraging labour force participation, does not present potentially deleterious effects, but can only reduce recidivism for those who have access to it.

Using data on prison spells from the National Corrections Reporting Program from 2000-2014, in our recent paper we consistently identify a negativerelationship between the minimum wage and an individual’s risk of returning to prison – higher minimum wages are associated with a lower probability of returning to prison (Agan and Makowsky 2018). In Figure 1, we can clearly see this negative association for both men and women. 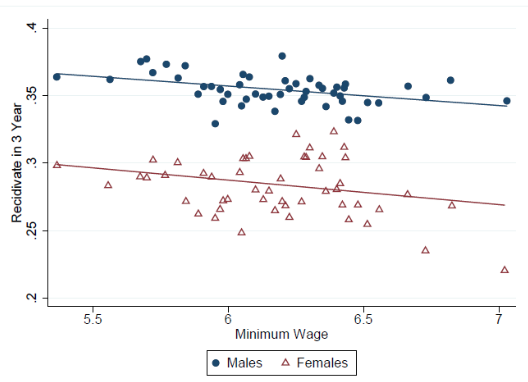 The relationship between recidivism and state EITC top-up percentages is similarly plotted in Figure 2. Here we see a different story. A consistently negative correlation between the EITC and recidivism for women standing in contrast to the weak relationship for men.  It appears that higher state EITC top-ups are associated with a reduced probability of women returning to prison, but not men. 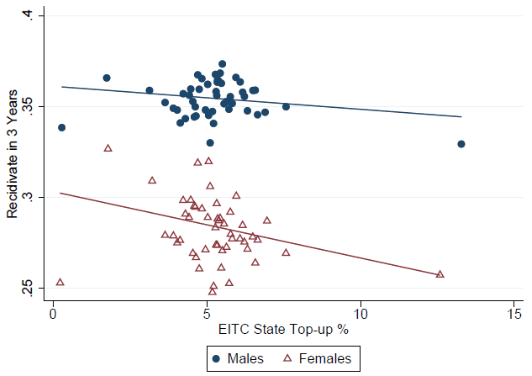 Note: To construct the binned scatter plots we plot the mean offender probability of recidivism within 3-years of release (y-axis) over the minimum wage and EITC (x-axis) for each of the 442 state-year combinations in the data, demeaning for state and year fixed effects. The observed state-year residual rates of recidivism are divided into fifty equal-sized bins and plotted over the mean minimum wage for each bin.  The line shows the best linear fit.

Controlling for a host of state and individual characteristics, we confirm these results, finding that a $1.00 increase in the minimum wage is associated with a 0.97% decrease in the probability an individual returns to prison within one year. The average probability of returning to prison within 1 year is 17.3% – this implies that the average minimum wage increase of $0.50 reduces the probability of returning to prison within one year by 2.8%. The existence of a state top-up to the federal EITC decreases the probability a woman returns to prison within three years by 3 percentage points (11%). Higher minimum wages are associated with decreases in property and drug crimes, which one might consider income-generating crimes, but not violent and other crimes. This further corroborates a story where higher minimum wages, even if they lead to fewer total jobs, are resulting in more employment opportunities for released prisoners whose prospective earnings are superior to the income generated from criminal activity.

As of 2016, there were 6,392 separate state restrictions on employment eligibility for individuals with felony records (Frederickson and Omli 2016) Our results raise the possibility of significant welfare benefits from broad wage policies through their support of released prisoners trying to re-enter the labour market. The minimum wage may serve as an efficiency wagethat, while paying more than market estimates of released prisoners’ marginal products, provides a public good in the form of reduced criminal activity. Similarly, the EITC can serve to push net wages above those available from criminal activity, increasing the opportunity cost of crime without the potential increases in unemployment associated with minimum wages, at least for women. These results speak to the potential impact of expanding access to the EITC for individuals who are not custodial parents.

The NCRP data do not contain information on the actual employment of people with records, only whether they return to prison. Thus, it is difficult to speak to the exact mechanism behind this result.  Higher minimum wages and state EITCs could improve outcomes for the individual themselves or for others who can support them.  Future research should explore these mechanisms further. In addition, we note that the NCRP data we used run until 2014 and, as such, the largest minimum wage in our study is $9.50 an hour. Caution is warranted in any extrapolation of results to states and localities which have subsequently implemented or are considering markedly higher minimum wages.