Lambert here: Makes our own Civil War look like a blip. However, at least some of the conclusions seem to be borne out for our Civil War, too: Increase in state capacity, for example.

The Taiping Rebellion, from 1851 to 1864, was the deadliest civil war in history. This column provides evidence that this cataclysmic event significantly shaped China’s Malthusian transition and long-term development that followed, especially in areas where the experiences that stemmed from the rebellion led to better property rights, stronger local fiscal capacity, and rule by leaders with longer-term governance horizons.

How do civil wars shape a country’s development? And what are the underlying mechanisms? The past decades have witnessed a surge of this literature (e.g. Blattman and Miguel 2010), most of which deals withthe economic legacies of war and conflicts. Still, the long-term impacts of war, as well as the key mechanisms that underlie these impacts, remain poorly understood. As Blattman and Miguel (2010, p. 42) point out, “[u]nfortunately, we have little systematic quantitative data with which to rigorously judge claims about the evolution of institutions during and after civil wars… the social and institutional legacies of conflict are arguably the most important but least understood of all war impacts”. In a recent paper (Xu and Yang 2018), we add to this literature of civil wars by examining the long-term consequences of the Taiping Rebellion. 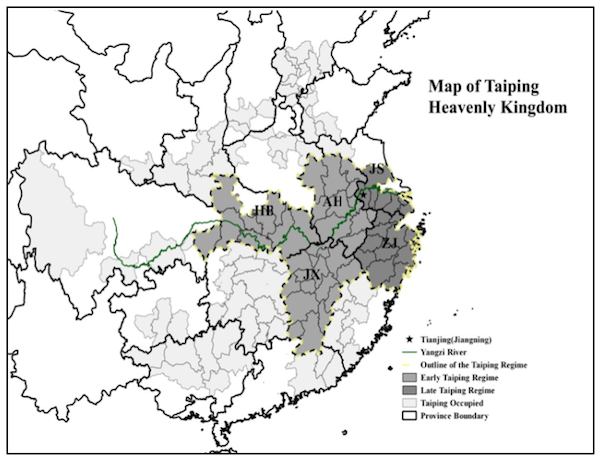 Unfolding in the mid-19th century amid what Galor (2005) calls the Malthusian regime, the Taiping Rebellion was the deadliest civil war in human history, and a critical juncture for China’s turn to modernity (Ho 1959, Fairbank 1992, Pinker 2011). Recent estimates from Cao (2001) suggest that the casualties amounted to 70 million. Indeed, the devastation left behind after the Taiping Rebellion gave those densely populated regions a new lease of life during the years of restoration that followed. However, the attention of historians has been drawn again and again to the revolt largely because the Taiping Rebellion was a watershed moment in Chinese history. The modern history of China has been drastically changed by those tumultuous years – to fight the rebellion, the Qing government was forced to decentralise, putting regional armies and public finance under the control of local leaders and fundamentally altering China’s evolution (Fairbank 1992). Strong provincial leaders emerged – warlords began to segment China, and to experiment with various forms of governance in these regions.

Against this backdrop, we investigate the rebellion’s long-term impacts and the underlying mechanisms responsible for them. To proceed, we draw from the institutional background and the literature to derive hypotheses. We focus on several aspects of the rebellion and Qing’s responses.

We analyse a dataset of prefectures in China Proper that were and were not affected by the rebellion from 1820 to the present day. We focus on population levels and cross-sectional development outcomes between 2000 to 2010. Population growth is a common measure of long-term development (e.g. Acemoglu et al.2002, Jia 2014), and it serves as an indicator of the Malthusian transition. We also examine other complementary aspects such as income levels, fiscal capacity, industrialisation, and human capital, which shed light on the mechanisms of the Malthusian transition. When looking at the population impact, we use a difference-in-difference (DID) approach, and we estimate the differences of the population growth rates (from the base period) between the control group (i.e. the prefectures that were unaffected by the rebellion) and the treatment group (i.e. the prefectures in which the rebellion took place). To address potential omitted-variables biases and measurement errors when examining the impact of the rebellion, we also apply the instrumental variable (IV) approach. 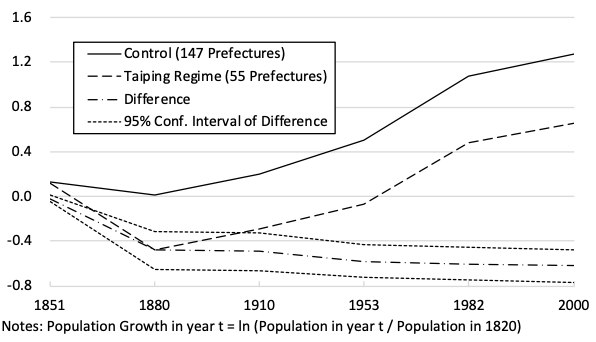 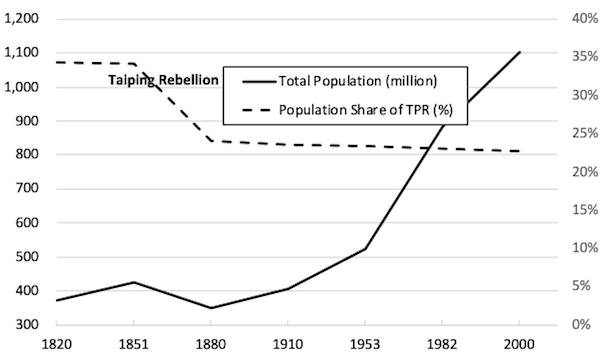 Moreover, the rebellion’s long-term effects on development are similar to those that emerged in Europe following its devastating experience of the Black Death (Voigtlander and Voth 2013). When augmented with favourable changes in institutions and fiscal capacity, the Rebellion facilitated China’s ensuing Malthusian transition – that is, from the Malthusian regime of high population growth and no real-income growth to the modern growth regime of sustained income growth with limited population growth (Galor and Weil 2000). This conclusion is supported by several pieces of evidence.

Based on the OLS and 2SLS estimates, in 2010, one-and-a-half centuries after the Taiping Rebellion, fiscal revenue per capita in the Taiping areas are at least 50% (0.6 standard deviations) higher than in other areas – a huge effect. This supports the war-induced state-capacity hypothesis. Furthermore, based on the OLS, Taiping areas have a significantly higher share of modern sectors – these areas’ share of manufacturing in GDP is higher by 4.6% (0.4 standard deviations). Based on the 2SLS, the Taiping areas’ average schooling level is 13% higher – again a large effect. These results support the Malthusian transition hypothesis.

Furthermore, the Early and the Late Taiping areas have vastly different long-term development. Compared to the control groups, the Early Taiping areas are now similar except that they have lower GDP per capita by 22 log points. In sharp contrast, the Late Taiping areas have advanced much further in the Malthusian transition than the control group – GDP per capita is 60% higher, fiscal capacity is 160 higher, the manufacturing share in GDP is 17% (1.2 standard deviation) higher. These results support the Malthusian hypothesis. The strong positive effects in the context of good property rights (i.e., Late Taiping areas), and the negative effects in the roving-bandit Early Taiping areas support the idea that the large population losses associated with large wars exert positive long-term impact only when institutions are better.

There is one interesting exception to those observed in the rebel areas with good land property rights. Areas near the rebel capital exhibit higher levels of schooling than elsewhere. We hypothesise that in areas close to Nanjing, capitalist elites likely had more power than landed elites, and that their influence, coupled with rising fiscal capacity, led to increased schooling. Our reasoning is that human capital and physical capital are complements, and that the capitalist elites would have pushed for the provision of public schooling for the their own benefit (Galor et al. 2009). Indeed, we find that areas near Nanjing currently have significantly higher schooling levels than elsewhere.

We measure the strengthening of fiscal capacity using the intensity of Likin, an internal tariff introduced by the Qing Empire during the Rebellion for war financing, which was abolished in 1930s. Increasing the intensity of Likin by one standard deviation in 1910 (1.28) is associated with a drop in the population level by 7%. Furthermore, higher initial fiscal capacity developed in the Taiping area (say, its one SD increase, i.e. 3) is associated with higher GDP per capita (0.2 standard deviations), higher shares of manufacturing (0.15 standard deviations), and higher human capital (i.e. and increase in schooling, 0.5 standard deviations, and reduction in mortality rate, 0.6 standard deviations). These coherent results offer support to the ‘Likin as state capacity’ hypothesis, and to the viewpoint of the importance of developing a strong fiscal system for long-term development (Besley and Persson 2009, 2011). The positive and widespread association with all key aspects of long-term development are especially impressive in light of the contrast between the contexts in the literature and our own – the literature emphasises the positive impact of external wars, but not civil wars, and here we observe similar effects from a large civil war. The literature emphasises the positive effects of fiscal centralisation (Dincecco 2015 Hoffman 2015), and here we obtain the novel finding of positive long-term effect of fiscal decentralisation (in the presence of strong agency costs in a very large country).

In this research, we offer evidence that the Taiping Rebellion, and the institutional and fiscal changes that were an outgrowth of it, affected the evolution of population levels, current incomes, fiscal capacity, shares of modern economic sectors, and human capital and continue to do so to this day. The rebellion facilitated China’s demographic transition from a Malthusian regime to a modern growth regime. Our findings support some of the prominent hypotheses in the literatures that examine long-term development and/or war and state capacity. Among these are that wars facilitate state capacity, big population shocks at times of significant technological changes facilitate favourable demographic transitions. Also, fiscal capacity and institutional quality are complementary, and a Malthusian transition and significant technological changes facilitate schooling in situations in which capitalists’ interest are well represented. Finally, human capital has key long-term development impact (see Table 1 for a summary of the match between our findings and the hypotheses). 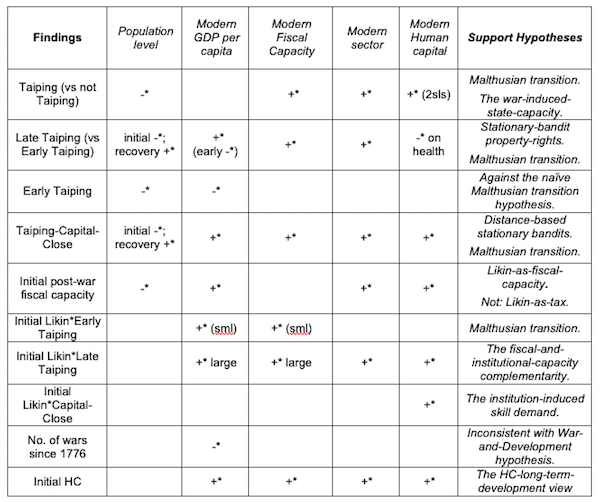