Following two tension-filled weeks at the UN climate talks in Poland, countries finally agreed on the operating manual to implement the Paris Agreement. While this rulebook is essential to kick-start the agreement in 2020, campaigners and scientists have warned of a stark disconnect between the urgency to prevent climate breakdown and the failed opportunity for radical action.

The rulebook covers a wide range of issues such as how countries should report their greenhouse gas emission reductions and who should pay what to help developing countries leapfrog fossil fuels and develop sustainably.

Given the elections of climate deniers Donald Trump in the US and Jair Bolsonaro in Brazil and strong obstruction from powerful oil and gas exporting countries such as the US and Saudi Arabia, the talks started in Katowice with low expectations.

Campaigners have accused the rulebook of being a compromise favouring corporate interests and countries which have been the most obstructive in the negotiation process.

Vitumbiko Chinoko, from CARE — an international humanitarian agency — in Southern Africa, accused “a few powerful countries” of holding multilateralism “hostage” during the conference.

“Vulnerable countries cannot carry the weight of the world on their shoulders. It is unacceptable for governments to continue to cower behind the inaction of the US and other big polluters,” he said.

Patti Lynn, executive director of NGO Corporate Accountability, said the climate talks had ended “without delivering what the world needs”.

“Governments fell far short of crafting a just and equitable roadmap to Paris’ implementation. The root cause of this failure — the fossil fuel industry’s interference — was on full display at these negotiations,” she said.

For those deeply involved in the process, the fact countries managed to agree on a single set of rules to implement the Paris Agreement — with flexibility in some areas — was a victory for multilateralism diplomacy in the face of growing populist movements rejecting climate action.

“Despite all the headwinds, the Paris Agreement has stayed course at COP24, demonstrating the kind of resilience it has been designed for,” said Laurence Tubiana, CEO of NGO the European Climate Foundation and one of the architects of the Paris Agreement.

The climate negotiations are a unique and very technical diplomatic exercise in which every country around the world have to agree on how to save the planet.

As Spanish ecology minister Teresa Ribera told the BBC, this is a “difficult” process.

“It is like organising a party for 200 friends, and there’s a single menu that everybody has to eat. It is not so easy but we have got it,” she said. 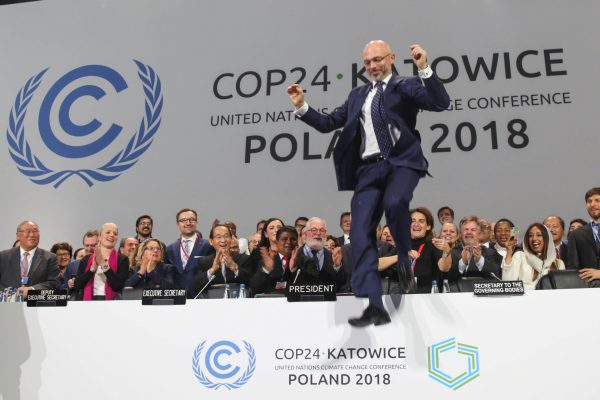 But there is also widespread acknowledgement that the package which was agreed late on Saturday night in Katowice is far from ambitious enough to deliver the level of climate action necessary to prevent climate breakdown.

Christiana Figueres, former executive secretary of UN Climate Change (UNFCCC), said the rulebook was “an important step” but that “no one is entirely happy with it”.

Faced with the lack of leadership during the talks, UN Secretary General Antonio Guterres was forced to intervene during the conference and warned: “To waste this opportunity would compromise our last best chance to stop runaway climate change. It would not only be immoral, it would be suicidal.”

In many ways, the talks have shown some of the limits of international diplomacy to deliver on climate action in line with the scientific consensus.

Urgency was very much the watchword for the talks.

In October, leading climate scientists from the UN Intergovernmental Panel on Climate Change (IPCC), warned that the world had 12 years to take “rapid, far-reaching and unprecedented changes in all aspects of society” to limit global temperature rise to 1.5 degrees Celsius and avoid the worst impacts of climate change.

To achieve the 1.5 degree target, global emissions need to fall by 45 percent by 2030, according to the report. But the current trend is in the opposite direction.

During the first week of the talks, the Global Carbon Project launched a report estimating that global CO2 emissions will rise by 2.7 percent in 2018 — the fastest increase in seven years.

One of the biggest setbacks in the negotiations was the joint effort from the US, Saudi Arabia, Russia and Kuwait to block the “welcoming” of the IPCC’s findings, and instead simply “note” the report.

The final text “welcomes the timely completion” of the report, rather than the findings themselves. Instead, the rulebook “invites parties [countries] to make use of the information  contained in the report”.

For campaigners and NGOs pushing for a radical system change, this was a failed opportunity to raise the level of ambition.

Mohamed Adow, international climate lead for Christian Aid, said: “This was the first opportunity since the IPCC report for countries to prove to the world that they were taking this seriously.

“But the fact countries had to be dragged kicking and screaming to the finish line shows that some nations have not woken up to the urgent call of the IPCC report.”

Countries’ current emission reduction pledges are on track to reach three to four degrees of warming — far from the 1.5 degree target. According to a UN report, countries have to raise their current targets fivefold in order to meet the 1.5 degree goal.

In the final text agreed at Katowice, countries are not specifically asked to increase their ambitions but simply “invited” to consider enhancing their pledges by 2020. The Paris Agreement will kick in that year, and countries are set to re-submit or update their climate pledges.

One of the most technical parts of the rulebook has been left as unfinished business.

Rules around “voluntary carbon markets” — known as Article 6 — were delayed because of obstruction from Brazil, which tried to water down efforts to stop “double counting” emissions cuts.

DeSmog UK reported that Article 6 is also one of the sections of the Paris Agreement most vulnerable to corporate capture. The CEO of IETA, a business lobby representing big corporations and fossil fuel companies, told DeSmog UK that the group was engaging in the negotiations under Article 6 and hoping to influence its outcome.

#COP24 just got a major shake-up – hundreds of people from around the world took over the main hall to demand real solutions & an end to polluter influence. The movement for climate justice is growing stronger by the day! #KeepItInTheGround pic.twitter.com/JEODh8YrZz

Lynn, of Corporate Accountability, said: “While Article 6 has been stalled, the current text to be negotiated at COP25 [next year’s climate talks] reflects big polluters’ wishlists, not people’s needs.”

Sara Shaw, co-coordinator of Friends of the Earth International, said: “We stand on the brink of catastrophe because corporate interests and fossil fuel money have infiltrated the climate talks to perpetuate the dirty energy system regardless of the cost for people and planet.”

Radical Action in the ‘Real World’

One of the most memorable part of this year’s talks was the presence of 15-year-old Greta Thunberg, who warned the conference that adults were behaving like children and that it was time for young people’s voices to be heard.

“We have come here to let them [world leaders] know that change is coming whether they like it or not,” she said.

Adow, from Christian Aid, said that “the most hopeful stories about climate change over the past two weeks have been from outside the walls of the summit,” pointing to school strikes for climate action, grassroots movements mobilising around the world and the rise of Extinction Rebellion.

“The global transition is under way and cannot be stopped. The question is will governments help it go fast enough to help the world’s poorest on the front lines of climate change,” he added.

Lynn, of Corporate Accountability agreed, adding that more than 250,000 people and 300 organisations from 129 countries signed a “People’s Demands” petition calling on world leaders to put people and the planet before corporate interests.

“With the People’s Demands as our guiding light, the movement to demand climate justice has never been more united, organised or determined,” she said.

You can read all of DeSmog UK’s coverage of the UN climate talks here.