Yves here. This is an important analysis. Even though it confirms what would seem intuitively obvious, that Airbnb helps investor/owners and hurts renters, Airbnb boosters have tried arguing that restrictions on short-term rentals would not produce the desired effect. The data from Los Angeles shows the reverse, particularly in tourist areas.

Short-term rental platforms such as Airbnb have grown spectacularly in recent years, and local governments around the globe have responded differently in regulating such rentals. This column analyses the effects of a policy change in several cities of Los Angeles County that restricted short-term rentals of entire homes and apartments. Airbnb has led to an increase in house prices that is particularly pronounced in popular tourist areas, and homeowners in these areas lose out from the regulation. Renters, on the other hand, benefit from the regulation.

Short-term rental platforms such as Airbnb have grown spectacularly in recent years. Since its launch in 2007, Airbnb has grown into a multibillion-dollar business, now offering more than 4.5 million listings in over 190 countries worldwide. Airbnb allows individuals to list their spare room or entire apartment for a self-established price to potential guests from all over the world. Particularly in heated housing markets, the new business model developed into an attractive opportunity for generating alternative income streams. However, the surge in popularity of these platforms has also led to substantial opposition because of decreasing housing affordability (Samaan 2015, Sheppard and Udell 2016), illegal ‘hotelisation’ and unfair competition (CBRE 2017), and other negative effects such as noise disturbance or overcrowding within and around buildings (Newling 2016).

Local governments around the globe have responded differently towards regulating short-term rentals. Most cities have not significantly regulated these platforms, but a limited number have put severe restrictions in place. Berlin, for instance, requires short-term-rental hosts to occupy the property for at least 50% of the time (O’Sullivan 2016). San Francisco imposes a cap of a maximum 90 rental days per year and a 14% hotel tax (i.e. Transient Occupancy Tax) (Fishman 2015), while Amsterdam will impose a 30-rental-days cap from 2019 onwards.

The effect of such regulations appears straightforward: basic economic theory tells us that in the absence of negative externalities, such regulation induces a reduction in housing prices (and rents) by restricting the most efficient use of housing. This reduction will be particularly pronounced in locations that are attractive to tourists. However, the presence of substantial negative externalities may lead to the exact opposite: regulation may induce prices (and rents) to increase because the reduction in negative external costs due to regulation will increase residential demand. Hence, the net effects of short-term rentals on the housing market are still unknown.

The Case of Los Angeles

There are numerous reports indicating a strong positive relationship between property values and the intensity of short-term rentals. However, calling out Airbnb as the culprit of rising housing prices and rents is problematic, since many cities have become increasingly popular among both locals and tourists in recent years, leading to higher housing prices and a higher number of Airbnb listings. In our paper (Koster et al. 2018), we overcome this challenge by relying on a quasi-experimental research design for Los Angeles County.

Similar to other cities, Airbnb rapidly grew in a decade from just a handful of listings to close to 40,000 properties in Los Angeles County (Inside Airbnb 2018). While many municipalities still struggle with putting up regulatory measures to curb the surge of short-term rentals, 18 out of 88 incorporated cities in Los Angeles County have severely restricted short-term rentals of entire homes and apartments by adopting home sharing ordinances (HSOs). These HSOs essentially banned informal short-term rentals: hosts renting out entire properties became subject to the same formal regulations as hotels and bed and breakfasts. Home-sharing through Airbnb (as well as long-term renting) is not prohibited but restricted. 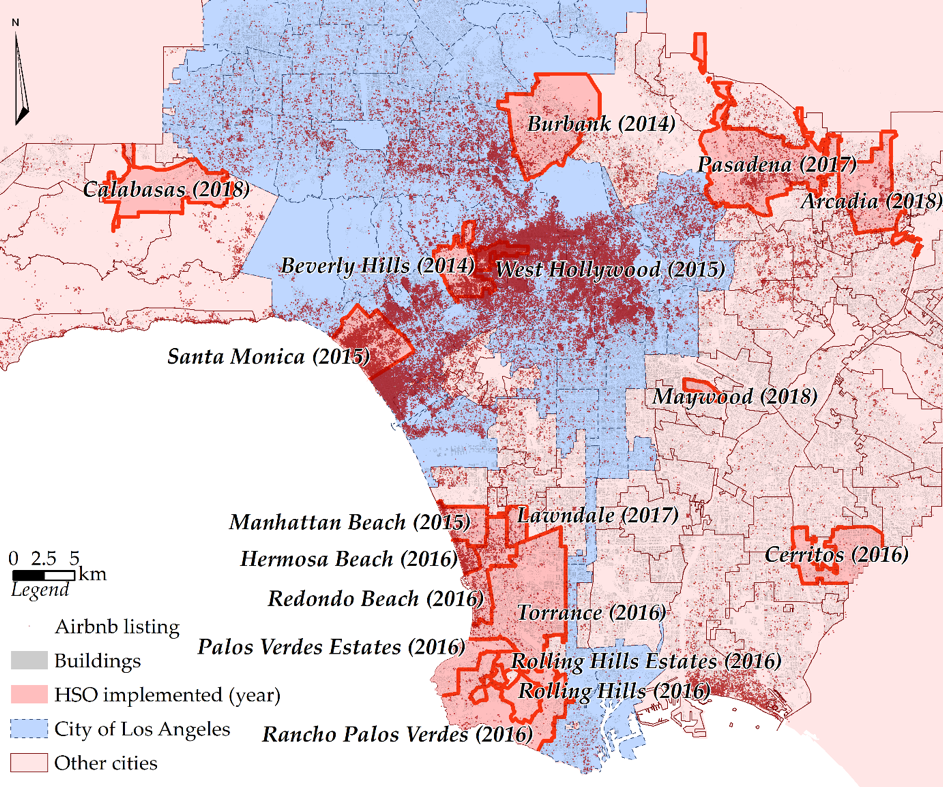 There are several reasons why we focus on Los Angeles County. First, it is the most populous county in the US and its main locality, the City of Los Angeles, has not yet formally regulated short-term rentals or enforced a comprehensive regulation (see Figure 1). This enables us to focus on changes in the number of Airbnb listings as well as housing prices close to the HSO-regulated places. We use micro-data on Airbnb listings and housing prices between 2014 and 2018.

Our empirical approach relies on a panel regression discontinuity design, where we compare listings that were affected by HSOs (treatment group) with nearby listings that remained unaffected by the legislation (comparison group). The borders of the HSO-affected cities serve as a geographic cut-off point, which assigns listings into either the treatment or comparison group. This quasi-experimental research design enables us to measure the causal effect of the HSO on Airbnb listings and housing prices.

Measuring the Causal Effect of Airbnb on the Housing Market

First, we estimate the effect of HSOs on a property’s probability of being listed on Airbnb. In Figure 2A, we plot this probability. We observe a sizable drop in listings in HSO-affected areas. Given an average probability of being listed of about 30%, the ordinance strongly reduces the number of Airbnb listings by around 30%. We plot the effect over time in Figure 3A and show that the reduction in listings is about 50–60% in the long run. Hence, in line with anecdotal evidence, this suggests that HSOs are very effective in reducing short-term rentals.

Note: Negative distances indicate areas outside HSO areas, and areas inside HSO areas before treatment. The dots are conditional averages at every 200-metre interval. The dotted lines denote 95% confidence intervals.

One expects a negative effect of the HSO on housing prices (except when negative externalities are substantial). We now compare changes in housing prices near the HSO borders. Figure 2B suggests that housing prices have been reduced by about 3%. The effect turns out to be highly significant statistically and although we examine effects at a very local level (within one kilometre of the border), we show with more elaborate statistical techniques that the estimated effect is very robust to the choice of the geographic focus. This effect becomes more pronounced over time (see Figure 3B). We also analyse the impact of HSOs on rents and show that the effects are essentially the same.

Using these estimates, we estimate the overall impact of Airbnb on property values and show that the effect can be large. For example, in areas within five kilometres of Los Angeles’s central business district, the price increase is 14%. Within 2.5 kilometres of beaches, the price increase due to Airbnb is almost 10%. Hence, in areas that are attractive to tourists, prices are substantially higher, while in areas without much tourist demand (e.g. Pasadena), effects are small.

What can we say about the distributional and welfare effects of Airbnb regulation? Using a back-of-the-envelope calculation, we show that regulating Airbnb has stark distributional implications. A regulation implies losses for homeowners, which are substantial for individuals who live in areas popular with tourists. The opposite holds for households who typically rent, who can only gain from such a regulation. Given the average housing price in HSO cities and given our assumptions, this therefore implies an annual welfare loss due to HSOs of about $680 per property. The intuition for such a substantial loss is that the investors’ willingness to pay is much higher than the willingness of the incumbent households being priced out of the market.

There are clear distributional implications of the HSO. We show that rents will decrease due to the HSO, so the average renter will gain. Because of the HSOs, homeowners lose, while renters tend to gain. This offers a plausible explanation as to why cities around the world that have heavily restricted short-term rentals typically have a high share of renters.