Yves here. Help me. This sort of thing gives economists a bad name. I am sure readers will manage to have even more fun with this, erm, Christmas piece, but consider one looming consideration they miss: shopping is work. Some people don’t like shopping. Other people who are indifferent don’t have the time. So having someone else shop for you is a part of why gift giving is a good thing. Did these economists miss that there are professional shoppers in the form of “personal shoppers” and decorators?

On top of that, even people who do shop often fall into habit, and a friend or family member can find things they like that they would not have unearthed on their own.

By Silvia Merler, an Affiliate Fellow at Bruegel who previously worked as Economic Analyst in DG Economic and Financial Affairs of the European Commission. Originally published at Bruegel

n 1993, Joel Waldfogel made the well-known seminal contribution in the American Economic Review, outlining the problem of the “deadweight loss of Christmas”. Waldfogel argued in favour of shifting the festive focus from the effects of Christmas spending on the economy onto the microeconomic implications of gift-giving. At the micro level, gift-giving is prone to a potential deadweight loss problem, because the best the gift-giver can do is to replicate the choice that the recipient would have made. While it is possible that the recipient may value the gift more than its price, it is more likely that the recipient will be left worse off compared to a situation in which he were to have made his own consumption choice with the same amount of money. In support to his thesis, Waldfogel ran a survey among Yale undergraduate students and estimated that gift-giving destroyed between 10% and a third of the value of gifts.

Waldfogel followed up with another paper in 2002, showing on the basis of a survey of both holiday gifts and items consumers purchase for themselves that consumers’ own purchases generate between 10 and 18% more value, per dollar spent, than items received as gifts. These estimates, Waldfold argues, support economists’ faith in consumer sovereignty, place some limit on the reach of the behaviouralist critique of economics, and, in addition, confirm the substantial deadweight loss of Christmas. A 2006 paper by Lerouge and Warlop compounds the argument by stating that many buying decisions require predictions of another person’s product attitude but consumers are often inaccurate predictors, even for familiar others. They provide evidence that target familiarity can even hurt accuracy in the presence of attitude feedback.

(**Note: Waldfogel then went on to publish a book titled “Scroogenomics: Why you shouldn’t buy presents for the holidays”. Available from Princeton University Press, it would make for an nicely inefficient Christmas gift.)

Again in 1993, John L. Solow wrote an opposite take titled “Is it Really the Thought that Counts?: Toward a Rational Theory of Christmas”. While acknowledging that as a social institution, the exchange of goods as gifts is difficult to reconcile with the theory of rational choice, Solow argued that when individuals’ utilities depend on others’ consumption of particular goods, gifts of goods can be preferable to gifts of money. Solow’s is therefore an externality-based argument, according to which gift-giving can indeed be a Pareto-superior equilibrium of non-cooperative individual behaviour. Altruism – defined in economic sense in the work by Beker (1981) – does not suffice to explain Christmas gift-giving, because it implies that cash is still optimal. The explanation, Solow argues, is to be found in the concept of paternalism (or “paternalistic preferences”, as in Pollak [1988]), i.e. the notion that the utility of one individual can depend on the quantities of goods consumed by other individuals.

Sara J. Solnik and David Hemenway responded to Waldfogel with a comment in the AER issue of December 1996, arguing that the non-representativeness of Waldfogel’s sample (above-average intelligence, wealthy, young, economics students) limits the generalisability of its result. Using a larger sample and a different method, Solnik and Hemenway found opposite results: more than half of their respondents valued the gift above its retail price, suggesting that Christmas giving actually represents a gain in social welfare. In another comment published in AER in 1998, John A. List and Jason F. Shogren argue that both Waldfogel’s and Solnik and Hemenway’s estimates can be challenged on two fronts: first, their loss estimates are hypothetical; second, the surveys were not framed as demand-revealing auctions. Re-estimating the deadweight loss with a different method, List and Shogren find a welfare gain to gift-giving.

A 2009 dissertation by Lydia Yao attempts at providing a rational theory of gift giving, in light of the  frequency of (supposedly inefficient) non-monetary gifts compared to more efficient cash transfers. She examines a model based on the idea that the sentimental value of a gift can be measured in terms of the time and energy the donor spent to select a desirable gift for the recipient and demonstrates that under a variety of circumstances, individuals choose to give non-monetary gifts over cash in order to signal to the recipient that they exerted this effort. Carlos Alvarenga notices that while in 1993 Waldfogel did not suggest a way out of the deadweight loss trap, in a 2013 interview with Paul Solman he seemed to have come to a position closer to that outlined in Yao’s by suggesting that “the thought is very important and doesn’t need to be communicated with a lot of money”. So, Alvarenga suggests, the key to the puzzle may be that by spending a little and thinking a lot, we can maximise the economic utility function of gift giving and minimise any potential deadweight-loss at this special time of year.

George Loewenstein and Cass R. Sunstein want to draw attention to the behavioural economics of Christmas. Behavioural economics – they argue – provides some straightforward lessons for gift-givers and gift-recipients alike. When people try to predict how another person will respond to a certain situation, they begin by imagining how they themselves would respond, and then make adjustments for differences between themselves and the other person. At both stages, they make big mistakes. Gift-givers should therefore beware of projecting themselves and their current mood onto your purchasing decisions. For gift recipients, the lessons is that psychologically astute recipients should realise that they risk disappointing people who are trying to please them and should avoid the common mistake of failing to display enthusiasm commensurate with the giver’s hopes. In other words: even if the gift confirms your worst fears, under no circumstances should you display these feelings.

When asked about the inefficiency of gift-giving, big-names economists cannot reach consensus. A survey ran in 2013 on Chicago Booth’s IGM Forum found that 54% of the expert panel of economists interviewed disagreed or strongly disagreed with the idea that gift-giving is inefficient. (See figure below). Alberto Alesina, Abhijit Banerjee, Barry Eichengreen and others pointed out that the choice of the gift-giver is a signal of intensity of search effort. Joseph Altonji, David Autor pointed out the interpersonal relationships factor that is involved in gift-giving. Recent Nobel prize laureate William Nordhausdisagreed, arguing that the value is the thought behind selecting the present, not the cash involved – which would make the efficiency argument true, but for thoughtless presents. Austan Goolsbee offered a hardly disputable counterfactual: “instead of proposing to your wife with a diamond ring, you offer a gift card of equal value. Efficient – if you don’t count your hospital bills”. Angus Deaton and Carl Shapiro went as far as stating that this is the sort of narrow view that rightly gives economics bad name. Alex Tabarrok and Tyler Cowen also debate the economics of gift-giving in this video. 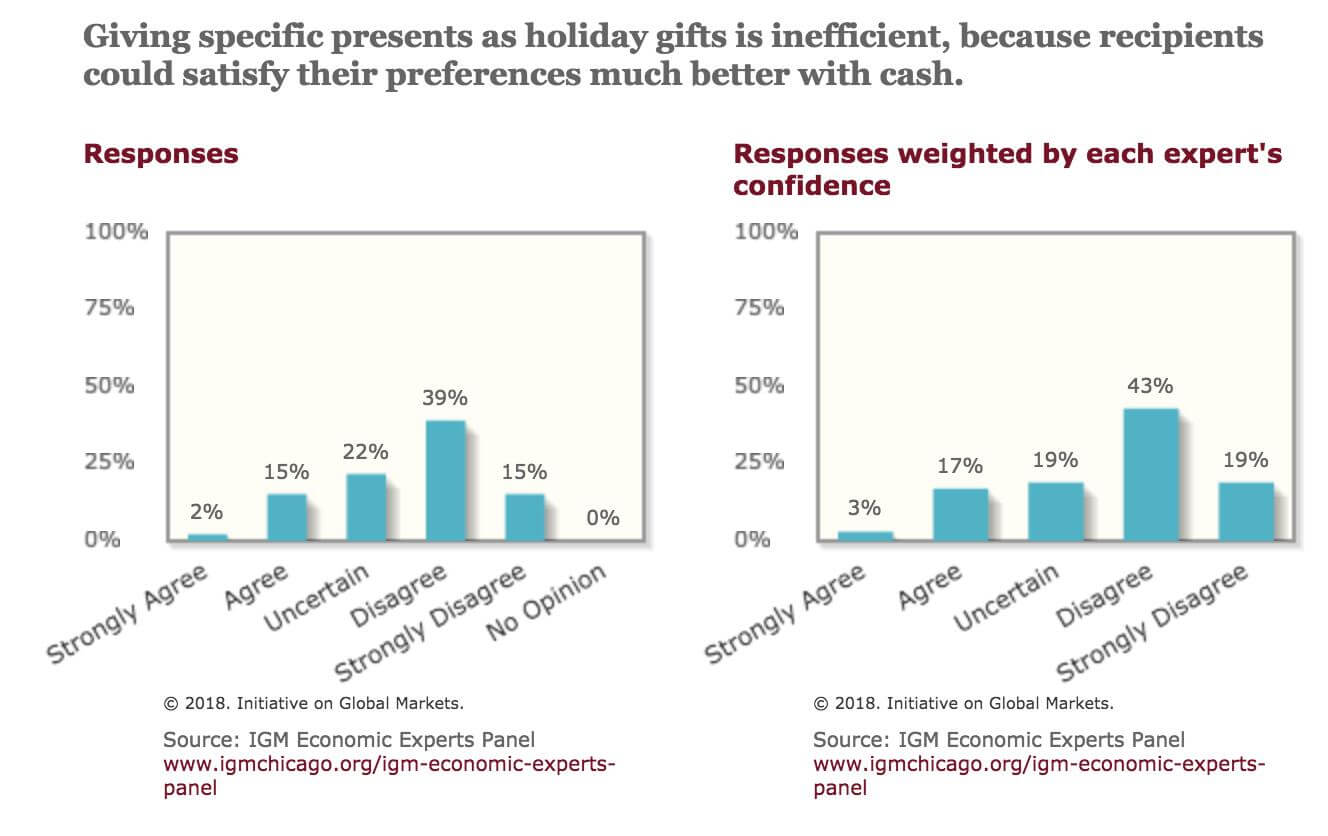 Sociologists like Dan Hirschman at Brown University think that the economists’ approach to the question is too reductionist. Economists are missing the utility of the giving of the gift to the giver. They are also missing the potential to give gifts that a recipient could not buy – admittedly, a small number of cases for adult to adult gifts, but still significant. Any gift brought back from a vacation, or created by hand, seems like it ought to not produce a deadweight loss. Lastly, a classics sociological concern is that economists are missing the way that gifts reinforce social ties by produce a positive externality in creating and strengthening social networks, which in turn produce positive economic and non-economic outcomes (“social capital”). Writing on Project Syndicate, Yanis Varoufakis argues that the thought experiment of understanding how opposing schools of economic thought – from neoclassical and Keynesian to Libertarian and Marxist – would view Christmas presents, would reveal the pompousness and vacuity of each and every economic theory.