Earlier this month, the Philadelphia Inquirer reported on some modest good news in the war on cash, with passage of a New Jersey bill that would ban cashless stores  in the state:

The measure, which can now go before the full state Senate, would require all brick-and-mortar retailers to accept cash, excluding transactions made online, by telephone, or by mail. That would make New Jersey the second state to prohibit retailers from refusing to accept cash and the first since 1978, when Massachusetts passed a law banning cashless stores.

The state Senate Commerce Committee unanimously approved the bill 5 to 0, with amendments that would exclude retailers inside airports and certain parking facilities from the cash requirement. Specifically, the amended bill carves out municipally-owned parking facilities, parking facilities that only accept mobile payments, and airports as long as a terminal has at least two food retailers that take cash.
…

The state Assembly passed a version of the bill in June by a 71 to 4 vote.

In a Q and A with New York City council member Richie J. Torres, Grub Street notes that in addition to New Jersey, politicians in some eastern cities – including New York City, Philadelphia, and Washington D.C.- are also mulling restrictions on cashless stores. Another recent Grub Street piece,  More Restaurants and Cafés Refuse to Accept Cash — That’s Not a Good Thing “Just because you don’t have a piece of plastic, you can’t get a sandwich? ”, describes the cashless trend in more detail.

Torres regards cash bans as both classist and racist:

Why do you think cashless business models “gentrify the marketplace”?
On the surface, cashlessness seems benign, but when you reflect on it, the insidious racism that underlies a cashless business model becomes clear. In some ways, making a card a requirement for consumption is analogous to making identification a requirement for voting. The effect is the same: It disempowers communities of color.

These are public accommodations. The Civil Rights Act established a framework for prohibiting discrimination in matters of housing, employment, and public accommodations. If you’re intent on a cashless business model, it will have the effect of excluding lower-income communities of color from what should be an open and free market.

And we’ll start to attach a certain stigma to people who pay for things with cash?
Exactly, in the same way that one might stigmatize [Electronic Benefit Transfer (EBT)] cards. When I was growing up, I remember the embarrassment that surrounded the use of food stamps. We live in a society where it’s not enough to stigmatize poverty; we are also going to stigmatize the means with which poor people pay for goods and services. 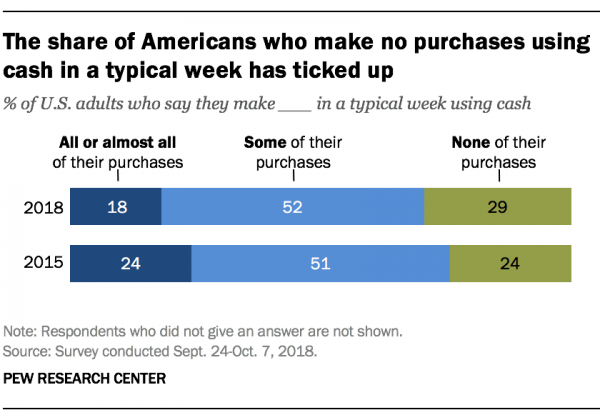 As Figure 2 makes clear, declining use of cash correlates heavily with income. So, adults with an annual household income of $75,000 or more are more than twice as likely as those earning less than $30,000 a year to eschew cash purchases in a typical week (41% compared to 18%). Whereas more than four times as many lower-income Americans report they make all or almost all of their purchases using cash, compared to higher income Americans  (29% vs. 7%). 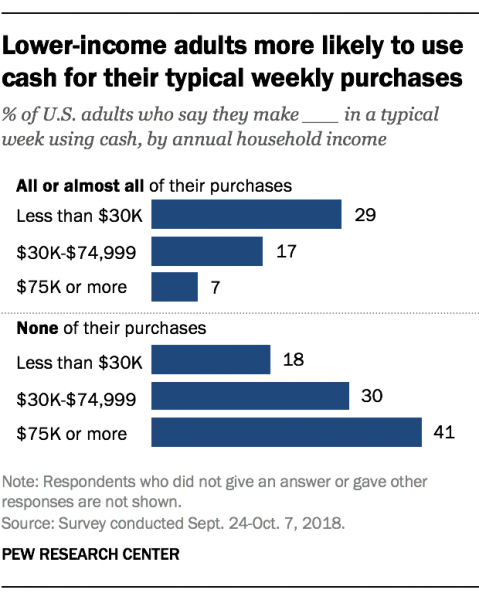 Pew reports that both race and cash use also correlate, with 34% of blacks using cash for all or almost all of their purchases, about twice that of the 15% of whites and 17% of Hispanics who rely on cash. Similarly, age is also important, with 34% of adults under the age of 50 making no cash purchases in a typical week, compared with 23% of those ages 50 or older.

Last week, the Washington Post noted in The global cashless movement meets its foe: Local government, that one reason for the higher reliance of lower-income Americans on cash is their restricted access to financial services:

According to FDIC estimates, 6.5 percent of American households were unbanked in 2017, meaning they did not have an account with an insured financial institution. Another 18.7 percent of households in the United States have a checking or savings account but still relied on financial services outside of a traditional bank — such as payday loans or check-cashing businesses — the estimate showed.

Over to Grub Street and Torres again for a trenchant summary of the main issue:

What do you make of the claim, “But these days everyone has a card!”
People who say that are living in a bubble of privilege — they look around and all their friends have cards. In response I say, “Does it occur to you that your world is pretty unrepresentative?” There are hundreds and thousands of New Yorkers who may have no permanent address or home, and many New Yorkers who are underbanked, either because of poverty or because they lack documentation. Requiring a card is erecting a barrier for low-income New Yorkers — period — and it’s coming from the very communities that claim to be progressive, as if, “Well, I am all for racial justice just so long as it doesn’t come at the expense of my own privilege.”

I think that many of these places actively want to keep a certain type of person out.
Of course! Earlier I said that no matter what the intention was, its effect is discriminatory, but I do think that it can also be intentional where the idea is to filter out the deplorables.

Even advocates of cashless  transactions concede critics have a point – but reject the stark conclusion that the purpose of cashless policies is to exclude certain types of customers. According to the WaPo:

As CNBC has noted, business leaders such as Shake Shack founder Daniel Meyer have defended cashless policies by pointing to higher security and improved customer service and efficiency, even as they acknowledge their critics. “We know that some have raised concerns about the socioeconomic implications of operating a cashless business” Meyer wrote in a blog post earlier this year. “That’s certainly not our aim.”

Some cities and states are actively pushing back against the trend toward cashless businesses.  Pending or mulled measures that maintain a place for cash would ensure that public accommodations remain accessible to all – and not restricted only to those privileged to have access to a credit or debit card, or a mobile app.