The American Dream is grounded in the US being the land of opportunities, but real opportunity requires mobility across generations. This column examines the influence of parents’ income on the income of their children in the US for the period 1980-2010. Parental income has a greater influence, implying lower levels of mobility, for families with the highest and lowest levels of income. Education also plays a stronger role in economic persistence at both tails of the income distribution, while race affects mobility in the middle and lower parts of the distribution.

The idea of the US being a land of opportunities relies on the perception that intergenerational income mobility in the country is high. However, this commonplace perception has been questioned in the last decades.

The first studies estimating IGE for the US found relatively low values of around 0.2.  implying that just 20% of the difference between individual incomes could be explained by parental income. However, using better databases and correcting for measurement errors, Solon (1992) and Zimmerman (1992) established IGE estimates of about 0.4, suggesting much greater intergenerational dependence (or immobility). Later on, methodological reﬁnements aimed to better correct for transitory shocks and lifecycle bias (Mazumder 2005) resulted in estimated values of about 0.5. This ﬁnding spurred subsequent research analysing IGE in the US and around the world, with the US consistently ranking higher in IGE and showing less mobility than other countries with similar degrees of development (Corak 2006, Björklund and Jäntti 2009, Blanden, 2013).

One important limitation of this literature is that most studies derive IGE from a regression-to-the-mean model using ordinary least squares (OLS), reflecting the connection only at the mean of the income distribution and paying little attention to the possible diﬀerences in IGE at the higher and lower income tails. The few studies that did estimate IGE in the US at diﬀerent quantiles of the distribution did not find a clear pattern of IGE across the income distribution, but they were based on cross-sections with small samples (Eide and Showalter 1999, Grawe 2004, Cooper 2011). With respect to the evolution of IGE, studies have focused only on the mean and have arrived at disparate results (Hertz 2007, Aaronson and Mazumder 2008, Lee and Solon 2009).

Intergenerational Mobility Across the Income Distribution

In a recent paper (Palomino et al. 2018), we have estimated IGE in the US for the period 1980-2010 by applying a (conditional and unconditional) quantile regression (Koenker 2005, Firpo et al. 2009) to the model proposed by Lee and Solon (2009). This strategy allows us to use observations of individuals at different points of the lifecycle and to enlarge the available dataset. In this manner, we obtain more accurate estimations at the tails of the distribution while controlling for lifecycle bias and measurement error. We estimate an IGE value for the pooled sample of 0.47 at the mean of the income distribution, which is in line with the literature. More importantly, we observe a U-shaped pattern in the parental income inﬂuence on children’s income. Thus, IGE is highest at the lower quantiles of the distribution (0.6 at the 5th to 20th percentiles), falls to a minimum of around 0.38 at the 70th percentile, and then increases again up to almost 0.5 at the 90th to 95th percentiles (Figure 1).

Children in the upper-middle part of the conditional distribution show the smallest degree of intergenerational persistence, while top incomes and, especially, low incomes are very much conditioned by parental income. Interestingly, previous studies did not find an increase of IGE in the US from the 70th percentile onwards. Apart from the much bigger sample under consideration in our work, the observed difference is most likely due to the variable used – i.e. household income (instead of earnings) – which includes capital income, through which a great deal of the correlation between parental and children incomes in the upper part of the distribution occurs.

Figure 1 IGE across the distribution 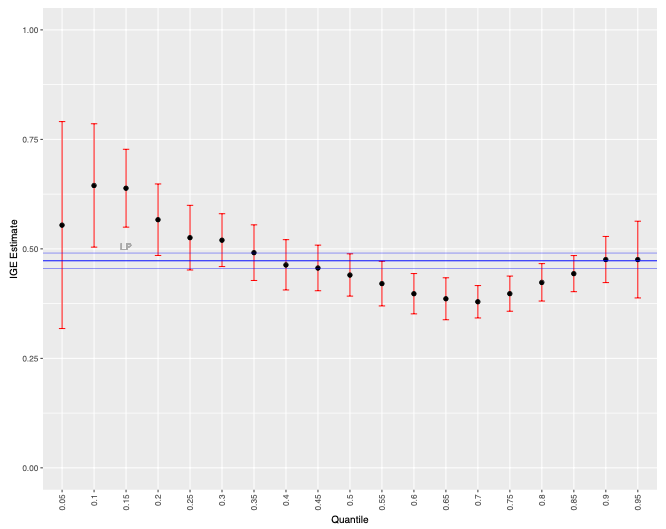 For the OLS estimation at the mean, IGE shows a decreasing trend in the first two decades analysed, followed by an increase in the 2000s. By quantiles, the estimates show that, below the median, IGE decreased in the 1980s and 1990s and increased in the 2000s, with a pattern that is more pronounced at the lowest quantiles. Above the median, both the mid-to-high and the high-income quantiles maintained a steady value of IGE along the three decades analysed and showed only a very mild decreasing pattern in the 1990s that turns into an increase in the 2000s. The new century was a turning point in the IGE trends for all income groups but especially for the poorer, with an increase in elasticity (i.e. a decrease in mobility) since 2002. (Figure 2). 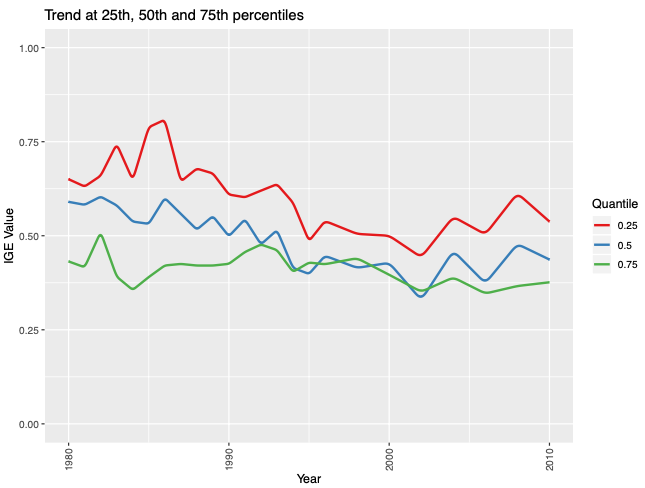 The Role of Education and Race

When education is included in the regression, the estimated IGE decreases 27.4% at the mean. This result is similar to Eide and Showalter (1999) and Cooper (2011), who find a mediating role of education in the persistence of income across generations of approximately 30%. Results by quantiles show that the share of IGE mediated by education varies between 20% and 48% depending on the position at the distribution. The share is around 20% for the 20th to 70thpercentiles and increases significantly when reaching the extremes of the distribution (Figure 3). Thus, despite there being no control for the quality of the schools, we find that between one fifth and half of intergenerational income transmission can be explained by the level of education that parents can provide to their children.

When race is also included in the regression, the estimated IGE decreases 10% at the mean (i.e. one tenth of the ‘inheritance’ of parental income is attributed to the race of the individual), controlling for education. Across quantiles, the importance of race is around 10% in the bottom half of the distribution and 5% from the 60th percentile upwards. 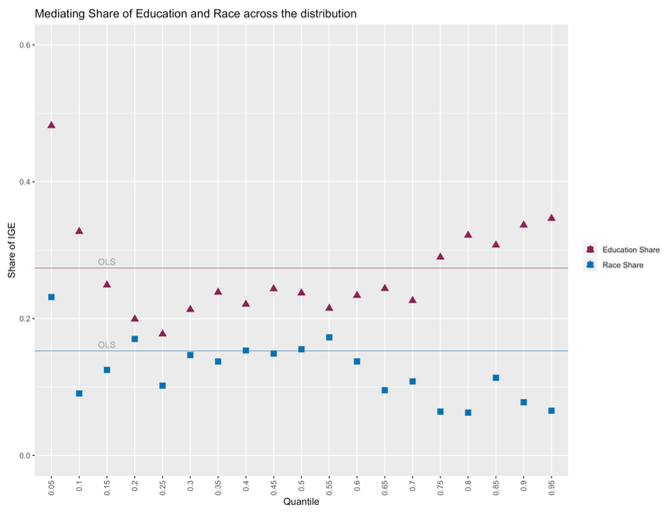 Policies that equalise individual opportunity may promote not only equity but also economic growth (Marrero and Rodríguez 2013, Marrero et al. 2016). By boosting intergenerational mobility, an important source of unequal opportunities – namely, parental income transmission – will be curbed. However, to increase equity and growth simultaneously, policies that reduce the persistence of parental influence on children’s income should consider the position in the income distribution, since income transmission varies across percentiles. The education system is one of the key channels for the transmission of income across generations, and therefore is one of the main sectors in which such tailored policies should be implemented.