Yves here. It’s surprising to see Piketty and even more so, one of this co-authors, Gabriel Zucman, make such strong claims for tax data as a way to measure income inequality. The rich and super rich engage in tax avoidance and evasion, to the degree that Zucman has estimated that 6% of the world’s wealth is hidden. First, that wealth was hidden to avoid paying taxes on it and/or to hide its criminal origins (such as looting governments). Second, the income on hidden wealth is also by nature hidden.

Thomas Piketty and his colleagues[1] have produced a new exposition of their empirical work, entitled the World Inequality Report 2018 (hereafter: WIR). Their purpose is to showcase the exploration of income and wealth inequalities begun with the World Top Incomes Database (Atkinson and Piketty 2010) and theorized in Piketty’s epic Capital in the XXI Century (2014). In particular the WIR concentrates on the presentation of measures and evidence; the stated goal is to inform a “deliberative process” with “more rigorous and transparent information on income and wealth” than has been available to date. In a review article published on-line and open access in Development and Change on December 24, 2018, I initiate this “deliberative process” by examining the WIR data and the claims made for it.

The ground-breaking, systematic and transparent methodology on which the WIR rests is largely the use of tax records–specifically income tax records–mined to show the income shares of tranches of the income-earning population: top one percent, top ten percent, next forty percent, and bottom fifty percent are the usual divisions. These Piketty and his colleagues argue are more complete, comprehensive, and comparable across countries and through time than the generally-used alternative, which is household or person-based surveys.

The WIR authors write disparagingly of the “Gini index”—the inequality measure most prevalent in such surveys—which they find too “technical” and not sufficiently intuitive. But they also object to survey methods: “The main problem with household surveys, however, is that they usually rely entirely on self-reported information about income and wealth. As a consequence, they misrepresent top income and wealth levels, and therefore overall inequality.” (p. 29) This sweeping critique carries on for several pages, brushing aside a body of research comprising thousands of papers and millions of survey observations, including the work of the Luxembourg Income Studies, the World Bank, Eurostat, the Economic Commission for Latin America, and the United States Census Bureau among scores of national data-collection agencies. It is a repudiation of what almost every previous researcher has done in this field over fifty years.

But are tax data really better? Where survey and tax measures both exist, and report different results, should one systematically prefer a measure based on taxes? The answer depends in part on the quality of the survey measures. But it also must depend in part on the quality, consistency, length and continuity of the national tax record, and in particular of the income tax. The WIR authors acknowledge that tax data have limits, in particular they cannot cover income and wealth hidden from tax authorities in tax havens. But the question of the quality of tax records goes much further than this.

My new essay examines the question from three points of view: the coverage provided by tax data in the world economy, the consistency of tax data with other sources of information on income inequality, and the peculiarities of tax-based measurement of inequality in the United States. It goes on to make a comparison with measures drawn from other forms of administrative data—specifically payroll records, used by the University of Texas Inequality Project—which are generally more consistent with records of inequality measured in household surveys than are the WIR’s tax records.

In brief summary, the review shows that by comparison with payroll and survey data, available records from tax files are relatively sparse, and biased toward wealthier countries and those that were once British colonies, which imposed income tax. It shows that tax data are far less consistent with survey and payroll records than are the latter two with each other. And it shows that even within the United States, a country with good tax records by world standards, changes in tax law distort the WIR’s measures of changes in the top income shares, while a misunderstanding of the nature of low-income tax filers in the US leads to a dramatic but nonsensical claim that the earnings of the bottom 50 percent of Americans have “collapsed” in recent decades.

Overall, the review casts doubt on claims by the authors of the World Inequality Report to have produced major advances in the study of world economic inequality, and documents that many of the findings touted in the Report as new and unprecedented have in fact been reported in the literature for years, even decades in some cases. 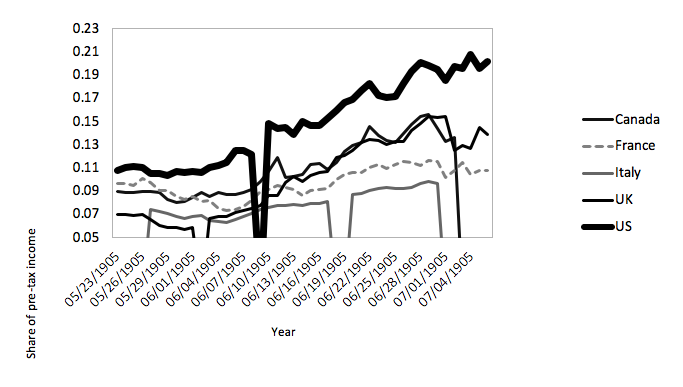 Figure 1 Top One Percent Shares from the World Inequality Database, showing an unacknowledged data break due to the US Tax Reform Act of 1986. Adjusting the data for the change in the tax definition of income would show that the US top share tracks the UK and Canada very closely. Low numbers for France and Italy are likely due to inferior tax recording of high income persons, not an underlying condition of less inequality.