Patient readers, I must again make this an open thread, since I am finishing up a post on yesterday’s Green New Deal action. However, I do want to hoist and extract some comments from yesterday:

From Amfortas the Hippie:

My cousin in law’s husband(!?) is a right wing business repub…dyed in the wool…now retired, and older and sicker(and comfortable…and has rediscovered Weed!).We never got along, at all, until last year.

I got high with him over 2 days this week and rode around our place and the neighbors bigger place(so, the whole little valley), looking at trees and grass and the too early flowers… and talked about everything from taxing the uberrich to medicare for all to a new new deal to killing Big Ag to a pox on both parties….and he agreed without reservation! Him: ” I don’t need a billion bucks…and I can’t see why anyone does…”

This is an extreme and extended version of a thousand tiny symposia I find myself in, everywhere from the feed store to the produce aisle to the mom and pop gas station where I get beer.

And again from Amfortas:

I do it out of long habit…thinking of myself as an anthropologist embedded with a hostile tribe is how I learned to cope with being a weirdo smart kid in rural Texas…and I wasn’t always so circumspect…almost forgiving…of these often violent morons as I am now, lol.

it hit me around the second iraq invasion:”who are these people? and why do they believe these things?”
answering that entailed listening, rather than preaching.

This is not always easy (see: Tea Party, Hillary=”Socialist”, etc), but it has been eye opening.
If I put on my tinfoil hat, I can’t help thinking that the lack of such close fieldwork (and the evisceration of the Humanities, in general) is intentional…like Nixon killing his own marihuana(sic) report because it negated everything they were trying to push as “reality”.

To which Jerry B responded:

As much as I love NC one of my issues with blogs and the internet in general is that it lends itself to more preaching than listening. To listen IMO requires at minimum phone calls (i.e. not texting or emails!) and ideally face to face human contact. Which leads to:

I would be very interested to hear from readers about more such fieldwork; I can think of two other commenters off the top of my head — please don’t feel slighted if my memory has failed, here– who are doing this: ArizoneSlim and CritterMom. But I bet there are others.

Adding, as a moderator/contributor, it would be great to search for and hoist such fieldwork comments, but they’re hard to find, because posts are oriented by topic. If fieldworkers want to make this a project… maybe invent a hashtag and put it in comments? 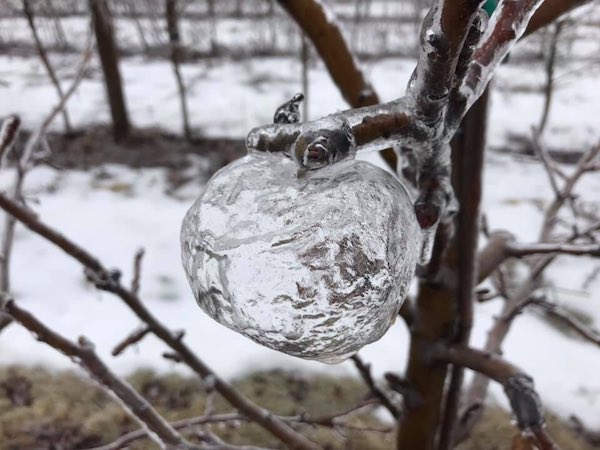 “GHOST APPLES: After freezing rain in Michigan, apples that hadn’t been picked got coated in ice. Many fell off the tree. Some had their insides turn to mush as apples have lower freezing points. The mush and skin fell, leaving these ‘ghost apples.'”