Yves here. Perhaps this sort of thing will come sooner rather than later, but I wish Green New Deal were putting more emphasis on measures that can be implemented quickly to cut energy use, like conservation and energy efficiency, over things that take more lead times and can get into NIMBY problems, like building more wind turbines. We don’t have time to waste, and too much emphasis on visionary schemes risks that.

The Green New Deal, a bundle of proposed policies that would combat climate change, create green jobs and address economic inequities, is eliciting the usual partisan debate over what to do about global warming.

But one humble and noncontroversial way to reduce carbon pollution has been gathering steam in red and blue states alike: energy efficiency. Policies like those that encourage the retrofitting of low-income homes in Texas with insulation and provide cash incentives for new homes in Vermont that generate as much power as they consume are reducing carbon emissions and pollution while creating jobs. Some 2.25 million people are working in the swiftly growing sector.

Although it gets much less attention than other clean-energy industries, like wind and solar power and electric vehicles, efficiency is booming. The electricity these improvements save grew by 50 percent between 2013 and 2017. In 2017, the U.S. conserved the equivalent of all the energy Denmark produced.

As a scholar of energy and environmental policy, who spent a decade working for the Massachusetts state government, I believe that because of its environmental benefits and job growth potential, energy efficiency will be the bedrock of both national and state energy policy, regardless of which party controls statehouses, Congress or the White House.

Why? Because, the policies that support energy efficiency expansion are those that can be embraced by conservatives and progressives alike, whether they are cast as buttressing a “green new deal,” “energy independence” or “workforce development” strategies.

Energy efficiency helps keep your beer cold, workspaces well-lit and clothes clean for a fraction what it would cost to build a new power plants of any kind. It also tends to be uncontroversial because it does not require the construction of big new industrial infrastructure.

Although you might associate the concept with setting thermostats uncomfortably low or mindfully turning off lights in empty rooms, current energy efficiency improvements generally don’t force anyone to change their habits. While reducing pollution and sparking innovation and entrepreneurship, they save money for customers and businesses, and are especially beneficial for low-income households, whose energy costs take up a large portion of their budget.

Until recently, it has been hard to directly track energy efficiency job growth, though. The federal government and most states did not even try until 2017, when the Energy Department began to release national energy jobs report. In addition, E2 and E4TheFuture, two nonpartisan and nonprofit groups that advocate for policies that are good for the environment and the business world, create state-by-state assessments.

While the Trump administration continues to dismantle policies that advance clean energy, many states are stepping up their efforts to reduce carbon emissions.

In the 10 years since its enactment, annual investments by utility companies in statewide energy efficiency programs rose from about $125 million to more than $700 million. That investment provided a nearly 4.5-to-1 return in terms of energy savings that created more than 84,000 new jobs.

The climate change benefits were significant too. By reducing carbon dioxide emissions by 1.8 million metric tons over the most recent three-year reporting period, the program achieved the equivalent of taking 390,000 cars off of Massachusetts roads.

Experts like the energy analyst Hal Harvey and the Tufts University scholar Gilbert Metcalf have documented these kinds of cost savings and emissions benefits for years, as have government authorities and utilities.

Energy efficiency is popular in states led by Republicans and Democrats alike.

Efforts by the Democratic strongholds known as “blue states” to encourage energy efficiency have paid off for states like California, New York and Oregon. All three are among the 10 best in terms of carbon dioxide emissions per capita, energy expenditures per capita and energy use per capita. 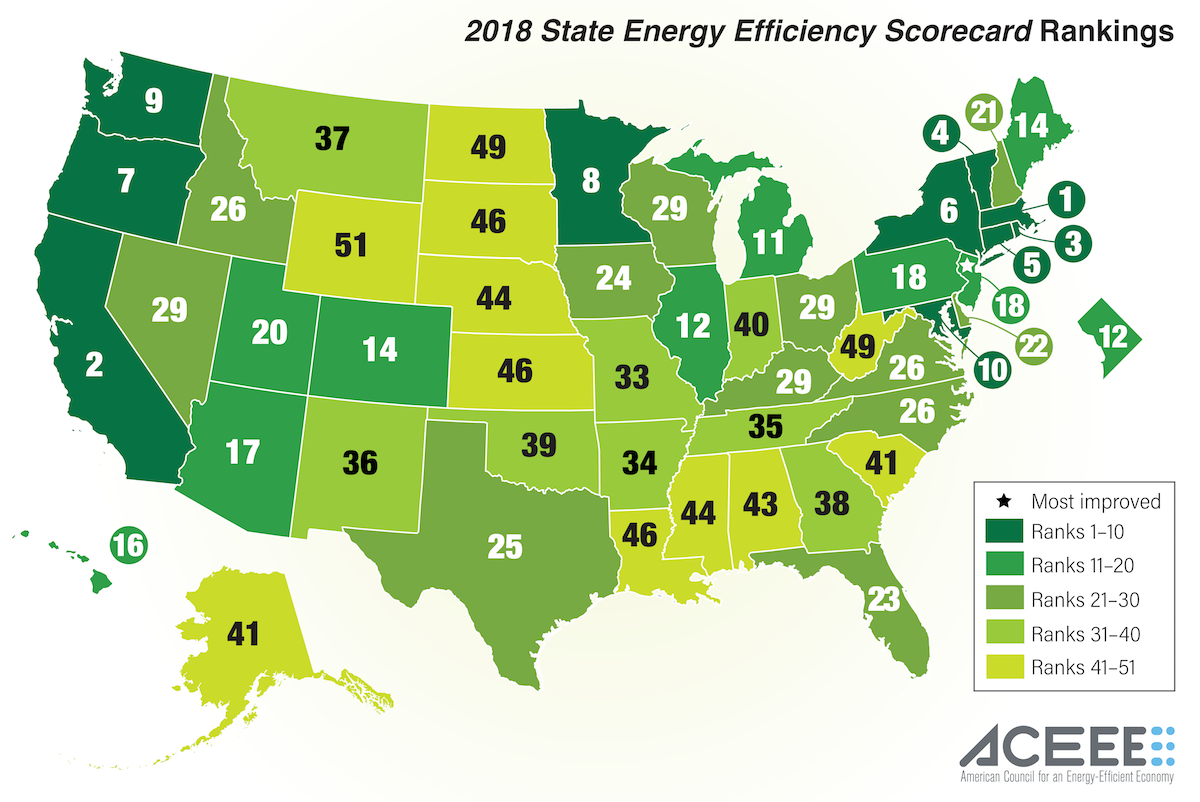 Most of the states deemed to be doing the most in terms of energy efficiency are Democratic strongholds like top-ranked Massachusetts, California and Rhode Island. But some of the top 20, such as Michigan, Minnesota and Colorado are not.American Council for an Energy-Efficient Economy, CC BY-SA

While energy efficiency is on the rise across the nation, there are still critiques of the policies encouraging these efforts. Such arguments center around regulatory overreach, the upfront costs of such programs and the potential loss of revenue for utilities. Amid concerns about the quality of some technologies, such as compact fluorescent lightbulbs, the Trump administration is trying to roll back a mandate to make all lighting more energy-efficient.

But there are many examples of where energy efficiency policies have succeeded in tandem with technological innovations.

Near-term federal action on the Green New Deal’s stated rationale, “addressing the existential challenge of climate change,” currently appears highly unlikely given the lack of support from Senate Republicans and the White House.

However, like some observers, I suspect that Congress may consider less comprehensive energy legislation before long. Because there is much to gain on both sides of the aisle by lowering constituents’ utility bills and growing jobs in a sector that has demonstrated potential, energy efficiency could be at the center of new energy politics and policies.