Lambert here: Measuring happiness… I can see dystopian possibilities, depending on who’s doing the measuring. And why “happiness” as an index of wellbeing? As opposed, say, to “contentment”?

There has been considerable criticism of the general reliance on GDP as an indicator of growth and development. One strand of criticism focuses on the inability of GDP to capture the subjective well-being or happiness of a populace. This column examines new growth models, paying particular attention to Bhutan, which has pursued gross national happiness, rather than GDP, since the 1970s. It finds evidence of the Easterlin paradox in Bhutan, and draws out lessons for macroeconomic growth models.

New Zealand’s Prime Minister, Jacinda Arden, recently proposed the idea of a ‘wellness budget’ for the country, and suggested that wellbeing should be incorporated into their growth agenda (Arden 2019). In a similar vein, William Nordhaus incorporated climate change into traditional growth models, efforts for which he was awarded the Nobel Memorial Prize in Economics (Gillingham 2018). In a famous article, Easterlin (1974, revised 1995) asked whether “raising the incomes of all will raise the happiness of all?”. This question was raised following the observation that reported happiness levels remained flat over the long-run in countries which had experienced high rates of real income growth. This anomaly was subsequently dubbed the Easterlin Paradox. How relevant is this in today’s times? The following table provides some interesting clues. 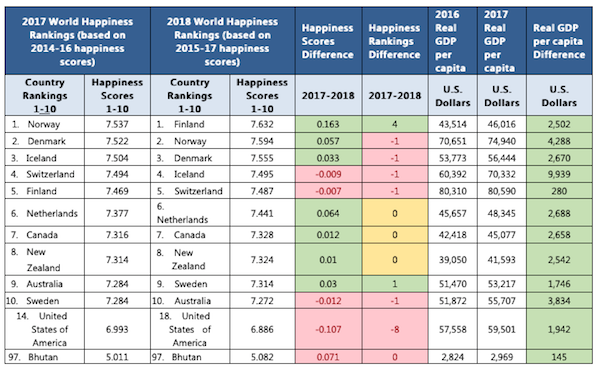 In Table 1, the World Happiness Rankings for different years are compared with their respective real GDP per capita outcomes. According to the Easterlin Paradox (ceteris paribus), the change in World Happiness Scores should not be proportional to the change in real GDP per capita (year-on-year difference) in any given year. If this is the case, then the country with the highest per capita income will not necessarily be that with the highest levels of happiness.

As can be noted in the table, countries such as Iceland, Switzerland, and Australia seem to be in line with the Easterlin Paradox. Bhutan seems to follow a similar trend. Interestingly, the US seems to be following the Easterlin Paradox. This has been largely attributed to the reduction in America’s social capital and the fact that “…certain non-income determinants of US happiness are worsening alongside the rise in US per capita income, thereby offsetting the gains in subjective well-being that would normally arise with economic growth” (Helliwell 2018). As such, it is quite apparent that there is a discrepancy at some level between the perceived positive proportional relationship between the notion of incomes (input) and happiness (outcome). Not only does this introduce the need to look beyond income levels, it also reasserts the need to look at other well-being measurements, such as happiness, as key measures of growth outcomes.

How can this discrepancy be bridged? More importantly, how can these elements be incorporated in a systematic manner into the policymaking ecosystem, rather than merely being proclamations from higher moral ground?

In a new working paper, my co-author and I explore Bhutan’s gross national happiness (GNH) index and its impact on macro-indicators (Balasubramanian and Cahsin 2019). The paper investigates the correlation and causality operating between GNH and GDP, the relevance of the Easterlin Paradox, and the broader lessons that countries can learn from this exercise. The idea of GNH was first proposed by the Bhutanese King in the 1970s (Government of Bhutan 2015), with goals of preserving the environment and emphasising the importance of happiness and collective well-being in the lives of the Bhutanese people. This notion has been followed continuously in Bhutan for almost 40 years. Bhutan’s policymaking is not driven by GDP – it is driven by GNH and the parameters that encompass it. Bhutan’s GNH index tool is a conglomeration of more than 50 indicators encompassing four pillars: sustainable and equitable social development, preservation and promotion of culture, conservation of the environment, and good governance (see Table 2) (Columbia University 2016).

The GNH Commission (GNHC) serves as the central organisation that uses the GNH tool to assess projects and ensure seamless inclusion of GNH at all levels of governance in Bhutan—from the dzongkhags (administrative and judicial districts), and gewogs (residential blocks), to cabinet level deliberations. In a practical sense, it is almost impossible for any big-ticket development project in Bhutan to go through without the assessment of GNHC using the GNH tool. Moreover, the GNHC along with the Government of Bhutan runs a series of GNH surveys at periodic intervals, which help to measure the levels of happiness among the populace, and lessons from these surveys are used in governance and in the administration of the GNHC.

Is the GNH a perfect model for the rest of the world? Of course not. Bhutan is a much smaller country than most other developing nations, and its economy is much less complex than many other countries. Moreover, completely negating GDP as a measure of growth is moving too far towards the other end of the spectrum. Can GNH serve as a complementary tool to current GDP measures in bigger countries? The answer seems to be a resounding yes. There are three ways in which the concept of GNH could be incorporated into policymaking:

Author’s note: All views mentioned here are personal views of the author and do not reflect the views of IFC or any other organisation.