Yves here. While imitation is the sincerest form of flattery, the gilet jaunes may not be so happy to have right wing yellow vest copy-cats.

By Rob May, who is currently completing a PhD. on the radical right at Sheffield Hallam University. His work focuses on British fascism’s links and influences with overseas counterparts. He has written for academic journals, newsletters and organisations. He lectures in history, politics and sociology. Originally published at openDemocracy

Alexander Gauland publicly supported the protests, while Princess Doris von Sayn-Wittgenstein, patron of the AfD in the Land of Schleswig-Holstein, posted a photograph of herself wearing a yellow vest. 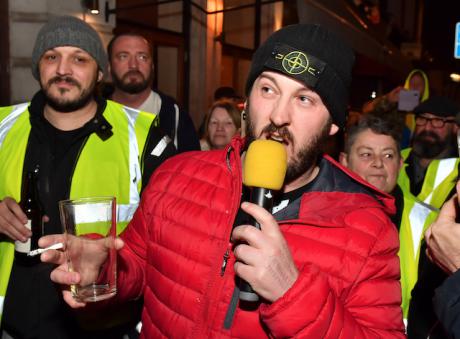 So-called ‘yellow vest’ movements are now active across the globe. Beginning in France on 17 November 2018, the ‘yellow vests’ (named after the fluorescent safety vests French motorists wear) protested against France’s rising fuel prices introduced by the Macron government before morphing into a much broader protest on issues such as the high cost of living and income inequality. Dissatisfied people across the world are now donning the yellow jackets and congregating to protest.

Inspired by the French model, the majority of these groups taking to the streets are aiming their discontent at their respective governments on what are traditionally left-wing issues. The largest ‘yellow vest’ protest outside France was held in Taipei on 19 December 2018 with over 10,000 residents calling for fairer tax laws. In Israel, the complaint appears to be targeted on governmental corruption and tax hikes. In Iraq, more employment opportunities and better services are the main reasons for discontent. In the UK, left-wing Labour activists have adopted the attire to demand an increase in public spending and a Labour government. While in Italy, ‘yellow vests’ have marched in Rome to protest against the new tough anti-migrant lawimplemented by Italy’s radical right Five Star government, making it easier to expel new arrivals.

However, the ‘yellow vests’ are not exclusively left-wing movements. The radical right has also capitalised on the unrest. Dressed in yellow, thousands of activists are demanding that their causes be heard. This blog post examines ‘yellow vest’ radical right activity in Canada, Germany and the UK.

Active across the country, the movement in Canada appears to have been appropriated by far-right extremists. Extreme racist, anti-Muslim and anti-immigrant chanting and placard waving are now commonplace in these marches. In fact, far right hate peddling biker gangs are not only taking part in the rallies but also recruiting new members from them. Brett Mineer, a Canadian radio show host, was bombarded with threats and abuse, including calls for his wife to be raped and for him to be physically attacked, after he criticised the ‘racist elements and conspiracy theories peddle[rs]’ among the crowds.

On 21 January 2019, Canada’s ambassador to France, Isabelle Hudon, claimed that the Canadian ‘yellow vest’ movement bears little resemblance to the gilets jaunes of France, suggesting that the French protests are not obsessed with race or immigration. During a trip back to Canada she was surprised to see some yellow-vest protesters brandishing signs with ‘violent words on immigration’, stating that ‘It’s not at all the kind of messages that the real gilets jaunes in France would deliver.’

In Germany, far-right organisations have found a new uniform with the yellow vest. Three such movements – Pegida (a movement ‘against the Islamization of the West’), Zukunft Heimat (Future Homeland) and Merkel-muss-weg-Mittwoch (a highly-active anti-Merkel group) – organised a ‘gathering in yellow vests’ outside of the Brandenburg Gate in Berlin on 1 December 2018 to denounce the UN Covenant ‘for safe, orderly and regular migration’ approved by the Bundestag the day before. A thousand people gathered to call for an ‘end to these inconsistent policies that give all rights to foreigners while ethnic Europeans are treated as second-class citizens’.

Alternative for Germany (AfD), the third largest party in the federal parliament, is also attempting to capitalise on ‘yellow vest’ demonstrations. Alexander Gauland, its co-leader and leader in the Bundestag, has publicly supported the protests, while Princess Doris von Sayn-Wittgenstein, patron of the AfD in the Land of Schleswig-Holstein, posted a photograph on social media of herself wearing a yellow vest.

Lastly, at the helm of the UK’s radical right ‘yellow vest’ movement appears to be James Goddard. Goddard is an Islamophobic self-professed supporter of the well-known anti-Islam campaigner Tommy Robinson – some label Goddard a ‘wannabe Tommy Robinson’. In fact, Goddard’s racism led to the suspension of his Twitter account. His fundraising activities have also been blocked by crowdfunding sites. In January 2019, Goddard attracted considerable media attention when, dressed in a yellow vest, he harassed public figures,leading to his arrest. As a result, ‘Overnight, the Leicester-born James Goddard turned from just another angry bloke to a leading figure in the British far-right.’ Subsequently, Goddard appears to be organising regular ‘yellow vest’ protests across the country, demanding a ‘hard core’ no deal Brexit. Many attending these marches appear to be using Brexit as a smokescreen to highlight other grievances.

Supporters of the English Defence League (EDL), an Islamophobic organisation founded by Robinson, have also made themselves visible at rallies. Speakers have addressed crowds to call for Britons to fight for Christianity against foreign cultures and religions. Some demonstrators have decorated their yellow vests with aggressive and offensive slogans or messages. For example, ‘F**k the Police F**k the Government F**k the EU’, ‘Left-wing scum: Merkel, May Macron, Corbyn Go To Hell’ and – presumably in reference to Asian grooming gangs – ‘protecting our children does not make us far right. It makes us just right.’ At present, each rally is attracting numbers in the low hundreds. Unsurprisingly, clasheshave occurred between the radical right ‘yellow vests’ and both the police and the left-wing ‘yellow vests’.

The future of the ‘yellow vest’ movements is difficult to predict. If the ‘yellow vests’ in France continue to protest in vast numbers – 2 February marked the twelfth consecutive weekend of demonstrations when between 10,000 and 13,800 people protested in Paris, with thousands more in Tours, Valence, Marseille, Bordeaux, Toulouse, and other French cities– and therefore sustain the interest of the mass media, the ‘yellow vests’ are likely to continue in other countries, and the radical right will continue to adopt the uniform for its own purposes.
iv>