Both economics and geopolitics matter for trade agreements. In particular, defence pacts raise the probability of a trade agreement between a pair of countries by as much as 20 percentage points. This column estimates that were the US to alienate its geopolitical allies, the likelihood and benefits of successful bilateral agreements would diminish significantly. Expected trade creation from an agreement between the US and EU countries would decline by 0.6% of total US exports.

We turn to the years prior to WWI to address these challenges.  Insofar as there was no General Agreement on Tariffs and Trade or WTO, the confounding effects of multilateral negotiations and of the current global rules-based order will be absent.  Moreover, evidence from this period is likely to be informative for identifying the impact of economic factors on trade negotiations insofar as those economic factors were growing stronger.  Trade was growing, and the number of trade agreements was growing as well (see Figure 1).  The period also saw a proliferation of military and strategic alliances, alliance politics featuring prominently in virtually all analyses of the factors heightening tensions in the run-up to WWI. 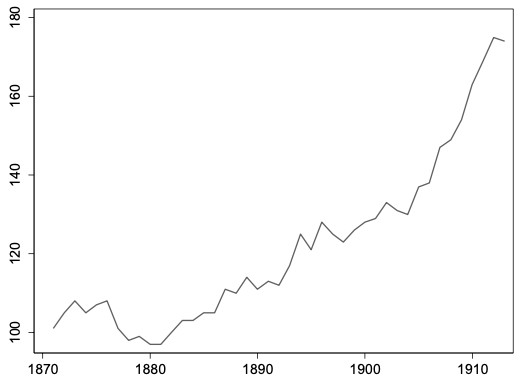 Note: The figure shows the number of bilateral trade agreements in force between 1871 and 1913 as reported in the data base of Pahre (2007).

We provide propensity score matching estimates of the average treatment effect among countries of defence pacts.  In addition, we use an instrument for military alliances: diplomatic representation, i.e. the presence and rank of diplomats from a sending nation in the host nation.  The presence of diplomats plausibly helps to forge or sustain international agreements and will therefore be positively correlated with military alliances. Diplomatic representation is unlikely to be otherwise correlated with trade agreements in this era. Governments sent or accredited diplomats based on broad foreign policy considerations, not mainly in order to directly affect trade relations.  But to be safe we calculated the residuals from a regression of diplomatic presence and rank on standard arguments of the gravity model, including distance, remoteness, contiguity, common language and common colonial relationship.  This provides a measure of diplomatic representation that is orthogonal to trade frictions.

The one bilateral alliance measure that is consistently significant is defence agreements.  This is in contrast to less ambitious agreements such as non-aggression treaties, neutrality treaties and ententes. Evidently, only the highest level of military alliance commitment influences the conclusion of a trade agreement. Put differently, only when countries invest significantly in their geopolitical relationship is there an enhanced likelihood of a trade agreement.  This echoes the results of Long (2003), who found that defence pacts are associated with higher trade volumes among alliance members, but that trade between members of non-defence pacts, such as neutrality or nonaggression treaties, is statistically indistinguishable from trade between non-allies.

Given these findings, what would be the impact on the likelihood of conclusion of a trade agreement of a scenario in which the US is no longer a reliable ally of its geopolitical and commercial partners?

Figure 2 Estimated trade agreement probability – US and its NATO allies 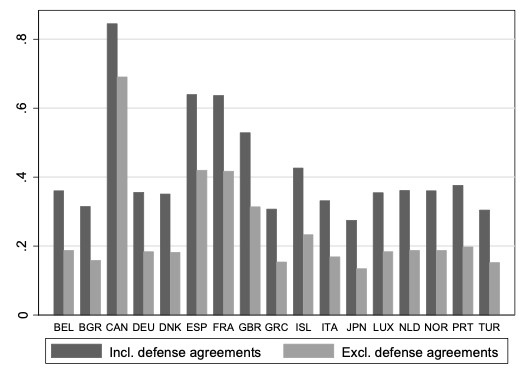 Note: The figure shows the estimated probabilities of a trade agreement between the US and selected NATO members (including Japan, which has the status of “major non-NATO. ally”).  The probabilities in question are computed by assuming (i) that the U.S. remains committed to its NATO obligations (i.e. setting the defence pact dummy to 1; dark grey bars) as well as (ii) a hypothetical scenario where the U.S. no longer remains committed to its obligations, hence implying that the military alliance with NATO members is as if inexistent (i.e. setting the defence agreement dummy to 0; light grey bars).

Figure 3 highlights the difference in the two probabilities in Figure 2.  The smallest relative probability decline, for Canada, is about 20%.  Proximity implies low trade costs and strong gains from trade for these neighbouring countries.  It follows that economic considerations create incentives to sign bilateral trade deals, whether or not these are reinforced by geopolitical considerations.  This is in line with the fact that the US signed bilateral trade agreements with Canada and Mexico, replacing NAFTA with the USMCA trade deal in 2018. 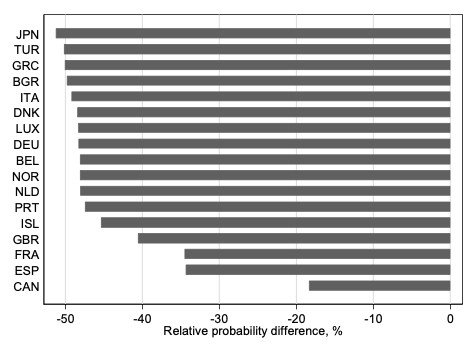 For countries that are remote from the US – or that did not have existing trade agreement with America – the story is different.  In some cases, such as Japan and Germany, which have benefited extensively from US military protection, the probability decline is about 50%.  For the UK, this decline is more than 40%.  US disengagement from global geopolitical affairs and pursuit of a trade policy focused on bilateralism, not multilateralism, would significantly reduce the odds of bilateral deals.

Note: The table reports the results of a scenario analysis simulating the decline in expected trade creation from hypothetical trade agreements between the US and selected (EU) countries where we assume that the US is no longer seen as a predictable military ally and committed to its NATO obligations.

Both economic and geopolitical factors matter for trade agreements.  Defence pacts raise the probability of a trade agreement between a pair of countries by as much as 20 percentage points.  Were the US to alienate its geopolitical allies, our estimates imply the likelihood and benefits of successful bilateral agreements would diminish.  Expected trade creation from an agreement between the US and EU countries, for instance, would decline by 0.6% of total US exports.

Authors’ note: The views expressed in this column are those of the authors and do not necessarily reflect those of the European Central Bank or the Eurosystem.