Labour markets in US cities today are vastly more educated and skill-intensive than they were 50 years ago, but urban non-college workers now perform much less skilled work than they did. This column shows that automation and international trade have eliminated many of the mid-skilled non-college jobs that were disproportionately based in cities. This has contributed to a secular fall in real non-college wages.

In the last 40 years, less-educated workers in most advanced economies have experienced a sustained fall in real wages. (Dustmann et al. 2009, Acemoglu and Autor 2011, Blundell et al. 2018). In the US, for example, wages have risen robustly among the most-educated workers, but since 1980 they have fallen in real terms among men with no college education (Figure 1). 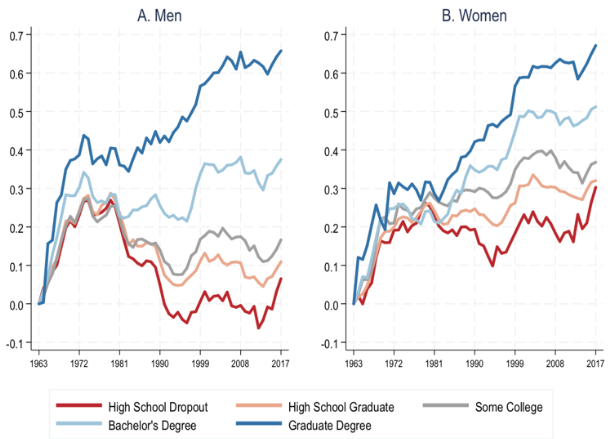 There are many potential explanations for this, including eroding union penetration and bargaining power, falling federal and state minimum wages, rising trade pressure stemming from China’s rise as a manufacturing power, and changes in employer practices that decouple the wages of less-educated workers from the productivity and profitability gains of their employers (Card 1996, Lee 1999, Autor et al. 2013, Weil 2014, Autor et al. 2016).

In recent work (Autor 2019), I document another force that has contributed to the declining fortunes of less-educated workers: the rapid erosion of middle-skill employment – both production work and administrative and clerical work – among non-college workers in high-wage urban labour markets.

But does occupational change explain the post-1980 divergence in real wages by education (see Figure 1)? A short answer is no. A simple counterfactual exercise that holds the occupational wage structure fixed while allowing the distribution of workers by education and gender to shift across occupations as occurs in the data shows that only a small fraction of the divergence in the data is accounted for by simple movements of education and gender groups across occupations. Thus, changing occupational composition cannot by itself explain most of the evolution of wage inequality between groups. Something else is happening.

The Decline of Middle-Skill jobs in Urban Areas

The structure of work differs systematically across places, and one of the key predictors of occupational structure is population density. Some activities, such as agriculture, naturally take place in low-density areas, but knowledge-intensive industries tend to locate in cities, where educated workers are most concentrated (Glaeser and Mare 2001, Moretti 2004, Berry and Glaeser 2005).

In the decades following WWII, there was a steep positive urban gradient in the skill and wage levels of workers in non-college jobs in the US. Non-college urban adults disproportionately held middle-skill, blue-collar production and white-collar office, administrative, and clerical jobs. These workers laboured in close collaboration with the high-skill, urban professional, managerial, and technical workers who oversaw factories and offices. This meant that middle-skill jobs for non-college workers were prevalent in cities and metropolitan areas, but scarce in suburbs and rural labour markets.

Figure 2 depicts the aggregate relationship between population density and occupational structure at the level of 722 commuting zones (CZs) covering the contiguous US states between 1970 and 2015.

The horizontal axis is the natural log of population density (the number of residents divided by CZ land area). For consistency, I used each zone’s population density in 1970 throughout, and the data are weighted by the count of working-age adults in each CZ. Each plotted point in the bin-scatter represents approximately 5% of all workers in each year.

The rising set of upward-sloping curves in the right panel show that while denser CZs have traditionally been more intensive in high-skill work, the level and slope of this relationship between density and skill-intensity has risen consistently over multiple decades. The overlapping downward-sloping curves in the left panel show that the fraction of workers engaged in low-skill occupations has historically been much smaller in high-density CZs, and this pattern has changed little over decades. In the middle panel, the fan-shaped set of curves show that the denser CZs were exceptional in the 1970s for having far more middle-skill work than suburban and rural CZs. But this exceptional feature attenuated. By 2015, the densest CZs had less middle-skill work than the suburbs or rural areas. 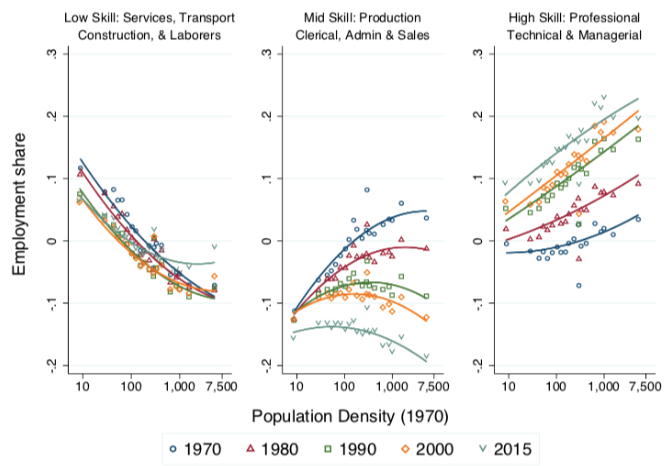 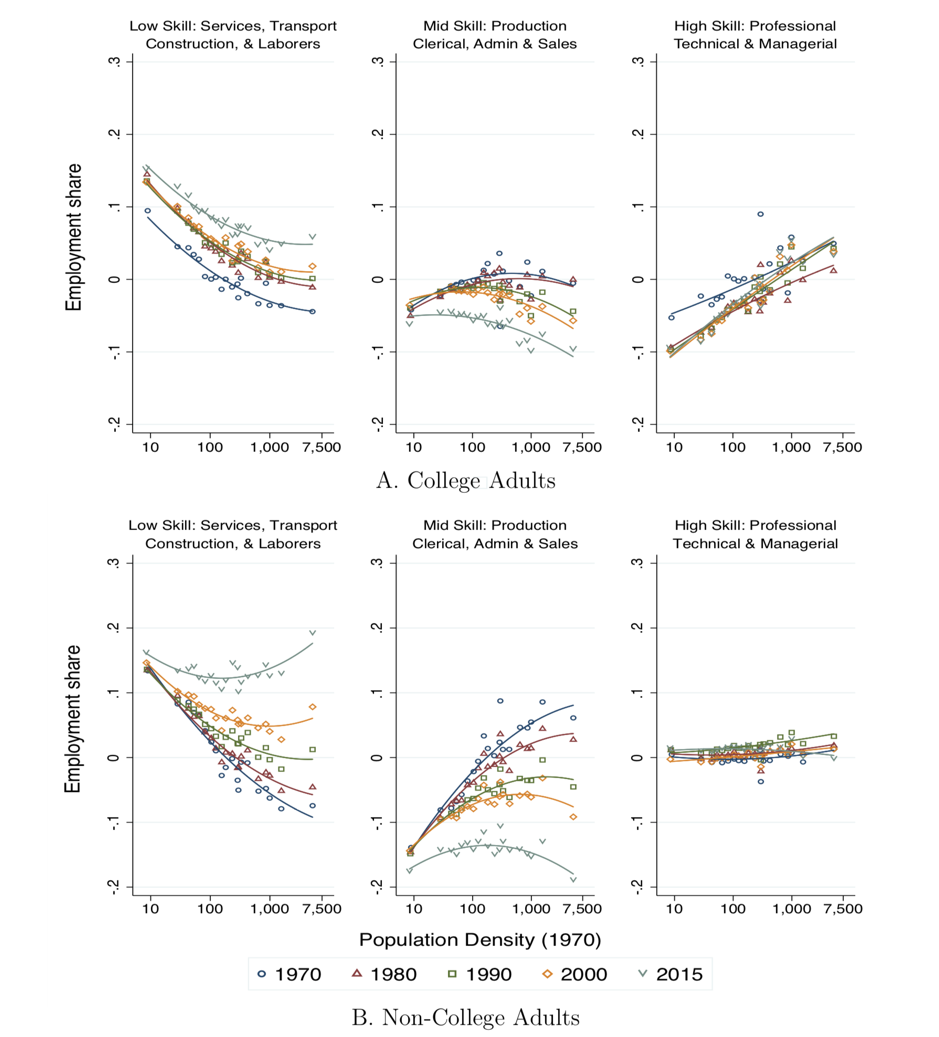 Where have all of these middle-skill jobs gone? Two secular demand-side forces have contributed substantially to their disappearance (Autor and Dorn 2013, Autor et al. 2016, Acemoglu and Restrepo 2017): one is the decline of manufacturing production work in the face of automation and rising trade pressure; the second is the proliferation of increasingly capable and user-friendly office computing tools that have reduced demand for workers in routine office tasks. While manufacturing had already departed the densest urban areas by the 1970s, the march of office computing has been particularly significant for urban, non-college workers. In 1980, the share of non-college workers in clerical and administrative occupations was 15-plus percentage points higher in the most versus least dense CZs. As office computing capabilities advanced, clerical and administrative employment among non-college workers fell steeply from the 1980s onwards. By 2015, there was almost no remaining (positive) density gradient in office work among non-college workers.

Wage Polarisation Has Been Disproportionately Urban

It is a robust empirical regularity that urban workers earn more than observably similar non-urban workers (Glaeser and Mare 2001, Moretti 2004, Glaeser and Resseger 2010). Given that land prices are intrinsically higher in dense locations, it is logical that higher urban wages compensate workers for the higher cost of urban living (holding amenities constant). For this to be an equilibrium, however, the productivity of urban workers must also be commensurately higher; otherwise, firms would locate elsewhere.

It is easy to imagine why urban productivity is greater for highly educated workers. In knowledge-intensive work, in-person interactions appear to have few close substitutes, meaning that proximity is critical. It is less obvious, however, why these productivity spillovers accrue to less-educated workers – but historically they clearly did so. One possibility suggested by the evidence above is that, in past decades, less-educated workers performed higher-skilled work in urban areas – specifically, production, clerical, and administrative jobs. If so, the secular decline of middle-skill urban occupations might have served to depress the urban wage premium among non-college workers. 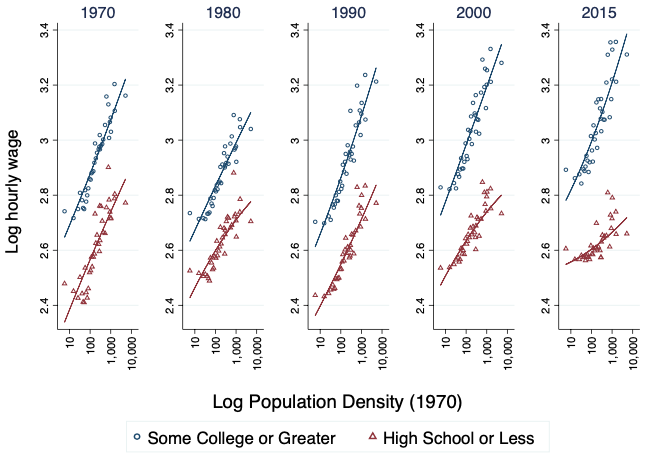 Figure 4 shows that this has indeed occurred. Between 1990 and 2015, the urban wage premium among non-college workers declined by roughly two thirds, even as the urban wage premium among college workers steepened. A similar pattern is documented by Baum-Snow et al. (2018). As I demonstrate in Autor (2019), this striking pattern is not driven by other obvious confounds such as changes in age structure in urban areas, shifts in the educational composition of the broad ‘non-college’ category, lingering after-effects of the Great Recession, or artefacts of the rising immigrant share of urban workers. Rather, it appears to be a genuine change in urban wage structures. In short, occupational polarisation has disproportionately occurred in high-wage urban and metro labour markets, and it appears likely that the geography of polarisation has magnified its wage impacts.